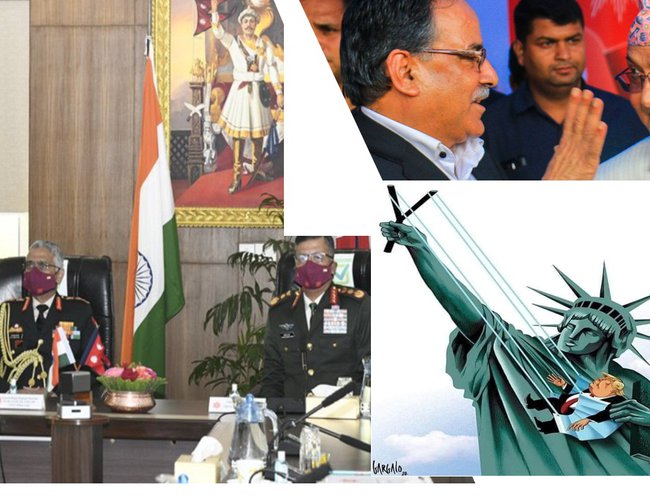 We live in Nepal under three levels of uncertainties, and they all pealed in the chorus last week. There were the nail-biting US elections, in the middle of which we had to switch to Nepali news outlets to figure out what was really going on with the visit of India's spooks and army chiefs to Nepal. If these were not troubling enough, our hydra-headed, allegedly communist but in reality kleptocratic crony capitalist ruling party went cannibalistic. What will it all mean for our future?

Anyone of these uncertainties would be unsettling enough for Nepal: all three together make for a toxic mix. For all the hopes Nepal's 2006 Rhododendron Revolution inspired of peace and stability forever hereafter, we should not even have to be asking this question today. But it is now painfully obvious those were badly jinxed euphoric days a decade and a half ago, evoked by a misplaced faith in characterless political agents of change. Let us start our soul-searching with what is the event farthest from us which a globalized world has brought to our doorsteps and then work inwards.

As these lines are being written, news has just come in that Joe Biden has squeaked through to the presidency winning what matters, i.e. majority electoral college votes, ironically on the day of the 103rd Anniversary of the Bolshevik Revolution in Russia. The world's most powerful democracy has an archaic system of vote counting where majority votes do not win you the presidency. If that were so, Hillary Clinton and not the Orange Showman would have been president. The whole world watched perplexed, wondering why, when Joe Biden was five million votes ahead of Donald Trump, their fates would be decided by just some seventy thousand votes in obscure parts of America.

This anomaly, and the circus it gave rise to, does not inspire much faith in America's global leadership of democracy, or for that matter of its Anglophone European parent, the Brexited United Kingdom. While Biden may go back to much of Obama's more sane policies, ranging from those on climate change to regional peace, whether in Iran and the Middle East or in Cuba and America's neighbourhood, a badly polarized and divided country will not make his path any easier.

This harsh reality was made clear in a Biden victory tweet by Michelle Obama: "Let's remember that [71 million Americans] voted for the status quo [of Donald Trump] even when it meant supporting lies, hate, chaos and division". It also won't help when fifty million Americans are jobless and the country's economy – its structural weaknesses exposed and exacerbated by the Covid crisis – is shrinking and heading for a recession that is nearing Great Depression proportions. US voters have gotten Trump out of the White House but Biden sadly will not be able to get rid of Trumpism from the White House or the US polity.

Lest we forget, in the post-WW2 years of the 1950s, the US commanded 50 percent of the world's GDP. In 2018, the United States share of global gross domestic product (GDP) after adjusting for purchasing power parity (PPP) was 15 percent. This share is expected to decrease to 14 percent by 2024, which is roughly a seventh of the global total. That is lower than China's and that means the US's ability to influence global events unilaterally will be commensurately lower, especially with its biggest ally Europe and perhaps even Japan beginning to look after their own regional interests vis-à-vis China, Russia, Iran and the Middle East. 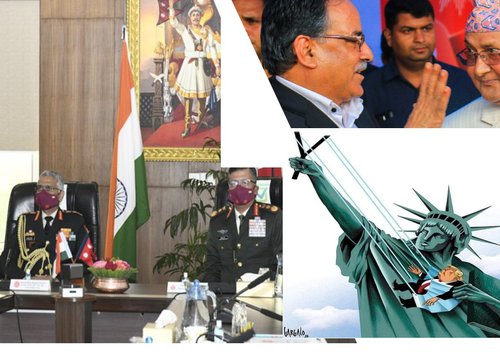 What will it mean for us in faraway Nepal? Much less American attention for sure as the US gets to solving its own economic and racial inequality problems. And if the Biden Administration ratchets down the Sinophobic hysteria of Trump and its commensurate Indo-Pacific China encirclement strategy, it will mean less importance for Nepal and its development in the US eyes. How much the new administration will be willing to spend its political capital on the IPS-inspired MCC project without a Pompeo-Pradip Gyawali rapport we will just have to wait and see. One interesting development worth following, though, is the Trump administration-appointed new director of USAid for Nepal: she is not a development or environment but a hard security expert of Iranian origin.

This global geopolitical seismic shift was matched by regional plate tectonics. Oli government's non-existent diplomacy coupled with Modi's macho one had brought Nepal-India relations to its nadir. Moreover, it is apparent now that Modi's neighbourhood belligerency, whether against China or Pakistan (or for that matter against Nepal by carrying out an inhuman economic blockade in the aftermath of the 2015 earthquake), has very little useful strategic content and is only meant for Trump-like domestic showmanship.

To begin repairing the Nepal-India relationship, Modi has initiated (difficult to believe infighting and ill-informed Nepali political leadership is capable of any initiative!) expeditions led not by Indian political or diplomatic figures but by the head of its foreign intelligence agency RAW and by its army chief. What is worth noting are a few critical points. This has come about against the backdrop of India signing up to a military alliance with the US, giving up all pretense not only of non-alignment but also of the self-esteem that should be the hallmark of a civilizational great power. It is the culmination of the "Howdy Modi" bromance with Trump and might even backfire with a Biden administration not very sympathetic to Modi's Kashmir adventurism. The results of the Bihar elections will soon show whether Modi is a Russian Putin making his country great again or its Boris Yeltsin bringing it to its economic knees and international ridicule.

Why did Modi choose his security people to open a dialogue with the Oli regime? The mysterious blogger Maila Baje has put it most insightfully: Modi knew that if the Nepali political establishment listened to any Indians, it was RAW which functioned their handler not just during the anti-King agitations of 2005 but much earlier ever since the establishment of multi-party democracy in 1990. With the army general, the motivation was, it seems, not only to signal traditional military and cultural ties that pre-dated independent India (Nepal Army Day is, after all, Maha Shivaratri and its earlier ancestor commanders also fought in Panjab Maharaj Ranjit Singh's army against the British). It was also to base its relationship with an institution that has deeper foundations in Nepali nationhood than fickle foreign Marxist gods-worshiping political parties. Although the Indian army chief signaled all of this by visiting the Kumari and Pashupati Nath temple, the Dharma-bereft communist rulers of Nepal missed the opportunity to reciprocate appropriately by allowing him into the Pashupati precincts to conduct personal worship.

All careful observers of Nepal-India relations know that during the 2005 anti-King agitations, the Indian establishment was divided. The RAW-led and Shyam Sharan-facilitated South Block was determined to remove the monarchy, especially after what it perceived was an affront to its pro-US policy of bringing in occupied Afghanistan by King Gyanendra's bringing China in as an observer to SAARC during the 2005 Dhaka summit. The Indian army, on the other hand including its military establishment in Kathmandu looking after the pension camps, was against that line of sidelining the monarchy and propping up the RAW-groomed Maoists. Today with hindsight, it was definitely more far-sighted regarding India's security threats than either its spooks (actually so corrupted that they could be used by Nepali pro-Indian politicians to help sort out their domestic problems!) or its diplomatic establishment (beholden more to Green Card worship than India's long-term interests).

All this is happening even as Nepal's ruling EhMaKe communist party is imploding and the official opposition Kangress politically comatose. If the American election circus was nail-biting, Nepal's inner-party infighting is breath-taking. News has just filtered out of the Baluwatar meeting of Oli with the EhMaKe dissident faction led by Prachanda with ex-PMs Madhav Nepal and Jhala Nath Khanal in tow: the acrimony would have made a fish-market brawl look civilized. And it is difficult not to imagine which of its faction leaders is up for sale to which foreign interests. All this, it seems, is a tragi-comic drama of Loktantra's dying throes, to be covered by this essayist and many more in the days ahead.