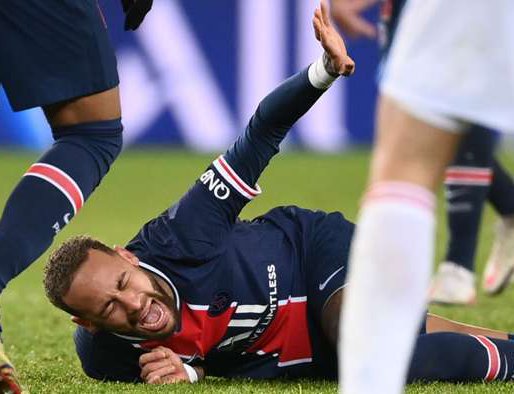 Neymar suffered what appeared to be a serious ankle injury as Paris Saint-Germain slumped to a 1-0 defeat to Lyon in Ligue 1.

PSG, who started with Kylian Mbappe on the bench, are firmly in a title tussle this term, and Thomas Tuchel's side suffered their fourth league defeat of the campaign – and a first home loss to Lyon in Ligue 1 since 2007 – at a wet Parc des Princes.Goal

Tino Kadewere got the only goal, putting Lyon ahead after Karl Toko Ekambi pounced on Presnel Kimpembe's error.

A lacklustre display was compounded in the final minute of stoppage time, Neymar going off in clear pain on a stretcher after injuring his left ankle due to a challenge from Thiago Mendes, who was sent off after a VAR review.

A confident Lyon started on the front foot, though PSG went closest in the opening stages when Alessandro Florenzi volleyed wide from a tight angle.

Yet Lyon's pressure told in the 35th minute as Kimpembe passed the ball straight to Ekambi, who threaded it through for Kadawere to slot home.

Florenzi unleashed another first-time strike just before the break, but Anthony Lopes made a superb stop.

Tuchel turned to Mbappe shortly after the hour, though Lucas Paqueta would have put Lyon two ahead if not for Keylor Navas' fine save.

A frustrated Neymar was perhaps fortunate to escape with a booking for a petulant shove on Marcelo, before Bruno Guimaraes and Mbappe both had chances to score.

Matters went from bad to worse for PSG in the closing stages, however, with Mendes' awkward challenge on Neymar resulting in the Brazil star, who was reduced to tears, having to be carried off.

As Tuchel's side slipped to third, the concern was that the former Barcelona frontman could be facing a long spell out of action.

Lyon, who are level on points with leaders Lille, are now unbeaten in their last 11 games in Ligue 1, and have won their last five games in a row.

PSG, meanwhile, have gone without a win in successive home league games for the first time under coach Tuchel, having last done so in 2018 during Unai Emery's tenure, and the prospect of losing Neymar is the last thing they needed.

Kadewere's goal was his fifth of the season in Ligue 1, meaning Lyon have three different players on five or more top-flight goals this season (Toko Ekambi, Memphis Depay and Kadewere).

It is more than any other side across Europe's big five leagues, with only PSG (33) and Lille (26) having netted more than Lyon in Ligue 1.

PSG's number 10 scored a stunning hat-trick against Istanbul Basaksehir in midweek, but he was kept under wraps by far tougher opponents this time round.

Neymar crafted just one chance and failed to register a single attempt, and he could now face a long spell out if the ankle injury is as severe as his reaction suggested.