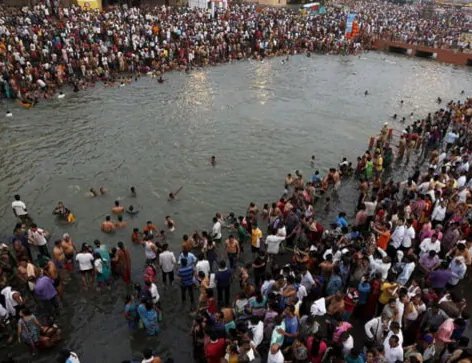 Every 12 years, the location of the event rotates between four spots - Prayag in Uttar Pradesh, Haridwar in Uttarakhand, Nashik in Maharashtra and Ujjain in Madhya Pradesh

Kumbh Mela is considered to be the largest religious gathering in the world and takes place every 12 years at four different locations. However, the date of the congregation and the place depends on star signs and the positions of the planets as per the calculation of astrologers.

This year, the Kumbh Mela will begin from 14 January and it will continue till 27 April. The Mela is being held in Haridwar this time with the fair to be organised on the banks of the River Ganges.

Every 12 years, the location of the event rotates between four spots. These are Prayag in Uttar Pradesh, Haridwar in Uttarakhand, Nashik in Maharashtra and Ujjain in Madhya Pradesh. Also, all the Kumbh Mela events are organised beside holy rivers so that participants can dip into the water and seek atonement or penance for their sins.

Kumbh Mela 2021: Legend behind the festival

Etymologically, ‘Kumbh’ means a ‘pot’ or a ‘pitcher’ and ‘Mela’ means a ‘fair’. So this fair is organised to celebrate the pitcher. Now as per Hindu mythology, this pot is actually the container of the amrit, or the nectar of immortality.

Once both the gods and the demons had agreed upon to churn out the pot of amrit from the ocean. However, even though the pot was obtained, the two opposing forces could not decide upon how to equally divide the elixir. This led to a war that spanned 12 years.

During this time, the mythical bird Garuda flew away with the pot and the nectar’s drops fell onto the land in four places.

Kumbh Mela 2021: How are the dates decided

There are different seasons and Hindu months notified for different locations. One of the four spots must get the turn to hold the Kumbh Mela once in 12 years and their turn must not be repeated.

According to astrological predictions, Jupiter must be in Aquarius and the Sun in Aries as per zodiac calculations for the event to be organised in Haridwar. And the season is Spring with the month being Chaitra (January to April).