Uttarakhand Glaciers And Recent Disaster: A Lesson To Our Country 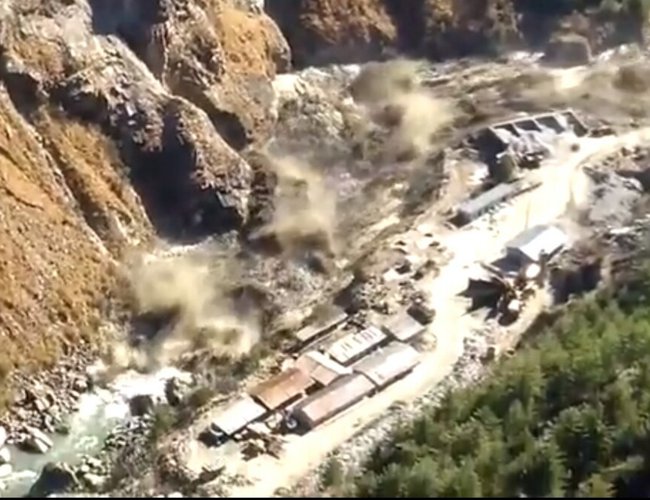 It did not surprise much to those studying water resources at the news that very recently a big 520 MW hydropower at an advanced stage of construction has been significantly damaged and another smaller hydropower has`been completely washed way when all of a sudden the glacier triggered Dhauli-Ganga river deluge struck. More than 200 people were killed. Professor HC Nainwal of Garwal University considers Glacier lake outburst to be the likely cause of this flood disaster.

Existing and proposed hydropower projects and human settlements in northern mountain regions of Nepal particularly in Kosi and Gandak basins are exposed to grave danger from the breach of giant glacier lakes located in Nepal as well as Tibet. The Dhauli-Ganga`glacier flood event should serve as reminder to our country also that resolution of glaciological flood problems must be accorded top priority to prevent from happening disastrous glacier lake outburst flood events .

Scientists have predicted that during global warming, the northern regions of the Northern Hemisphere heat up more than other areas of the planet. Mountain glaciers shrink. Regions experiencing light winter snow receive no snow at all. In temperate regions, snowlines shift to higher elevation and the snow packs melt earlier.

The adverse effect of the climatic changes is already being observed in Himalayan regions of our country. Glaciers are slowly retreating and new glacier lakes are being formed. Such glacier lakes pose serious threat to northern region of our country. Water resources planners in Nepal have already started to encounter serious problems arising from the glacier lake outburst floods (GLOF).

Glaciers are formed by accumulation of ice and snow on lands over a long period as a result of solid precipitation exceeding melting and evaporation. Glaciers differ from other bodies of land borne ice in their ability to flow. Ice streams form in mountain valleys and move downstream under the effect of gravity. Ice caps cover large land masses and spread out radially because of the great pressure built up by their weight.

Initially the snow deposits have density of about 0.1 and gradually change into a coarse crystalline structure with density of about 0.5. This formation is known as “neve or firn”. As new snow is deposited on the firn, it is further compacted and much of the air is expelled. Over a period of several years, the density increases and nears 0.90 under strain imposed by glacier movement. A realignment of the crystal structure occurs. The final transformation converts the firn into glacier ice, a tightly fitting crystal structure with density of 0.9 or slightly higher.

A glacier moves down its valley in nearly the same manner as a stream. Velocity surveys across glaciers show that there is a definite central current i.e. velocities near the valley walls are much lower than in the center of the glacier. On nearly horizontal or adverse slopes the greatest velocities is near the bottom of the ice mass, while on steep slopes the maximum velocity is near the surface. Ice is plastic under stress. Cracks and shear planes develop in glaciers because ice is relatively weak in tension.

In temperate regions the minimum thickness of ice required to induce flow in glaciers is between 30 to 45m. The glaciers are extremely sensitive to climatic change. Prolonged changes in the mean annual or mean summer temperature of less than one degree may instigate glacier advances or retreats amounting to hundreds of meters.

The dam materials of a glacier are unconsolidated moraine or glacier ice. The glacier lakes usually outburst under two conditions in Himalayan region. A glacier dam would collapse due to external factors when a big mass of lake water overtops it consequent upon the wave motion triggered by falling rocks or avalanches. Earthquakes can also result to glacier dam failure. Glacier dam could collapse if the dam slopes are weathered. It could also collapse if the seepage from the dam body significantly rises.

On August 4th 1985 the nearly completed Namche hydropower plant was completely destroyed by the Dig Tsho glacier lake outburst flood( GLOF). The Dig Tsho glacier is on the terminus of the Langmoche Glacier. The GLOF damaged not only the entire Namche Hydropower station but also all the bridges, trails, cultivation fields, houses, livestock along its path to the confluence of the Dudh-Kosi and the Sun-Kosi rivers at a distance of 90 km from the Dig Tsho glacier.

Gelhaipuco is an end moraine dammed lake located in the headwaters of Gelhaipu Gully (Natangqu River Basin , east of Riwo, Dinggye County). At 14.00 on Sept. 21, 1964, the lake burst abruptly. According to the study of the Chinese Academy of Sciences, there was a heavy precipitation in the Nantangqu River Basin, which caused the glacier of the Natangqu River to slide. Huge amount of ice slid into the lake. The generated shock waves triggered the lake water to overflow the moraine dam causing the burst. There was a breach across the dam which was 30 m deep. The debris flow rushed down to the lower reaches of the Arun River in Nepal, and caused heavy economic losses

At mid-night, July 11, 1981, an end moraine dammed lake located at the headwater of the Sunkosi River suddenly burst. A breach of 50m deep and 40-60m of bottom width was formed at the moraine dam. The highest burst discharge was about 1600 cu. m./ s, which was observed 23 minutes after the burst. The high flood lasted about 60 minutes and the burst water amount was estimated at 19 million cu. m. The debris flow damaged the Kodari Highway and the Sun-Kosi Power Station in Nepal. The flood destroyed the Friendship Bridge at Kodari. According to the investigation of 1984, there had been a similar burst in 1964 from that same lake, but the burst discharge and damage caused was smaller.

At present glaciers are retreating in the Himalayan region, as a result, glaciers lakes are being formed. Such ephemeral lakes disrupt communication systems and various infrastructures like hydropower directly, or indirectly subjecting the mainstream to periodic catastrophic floods. Glacier lake outburst floods also produce peaks in sediment transfer

Need for the glaciological studies of the Himalayas had been felt since a long time. In 1973, in cooperation with the International Hydrological Decade (IHD) 1965-1974, which was promoted by the UNESCO, observation studies of the glaciers in the Himalayan mountains within the Nepal territory were initiated by the Japanese Society of Snow and Ice. The studies were rewarded with good results. In 1980s, Royal Nepal Academy of Science and Technology (RONAST) was striving to set up an international center for the study of snow and ice primarily concerned with the glaciological studies in the Himalayas to promote sustainable economic and social development in Nepal and in adjacent countries. .

In 1988 a joint team of Sino-Nepalese conducted the studies of the glaciers and glacier lakes in the Arun and the Sun-Kosi basins primarily in the Tibetan region of China. The Lanzhou Institute of Glaciology and Geocryology took part in the study from the Chinese side, similarly the Water and Energy Commission took part from the Nepalese side. The field investigation team used satellite imagery data to locate the lakes and to estimate their dimensions as well as their morphological characteristics. In Arun basin there are 737 glaciers in Tibet. whose total water storage is estimated to be 121 billion cu. m. It was found that there are 229 glacier lakes and out such glacier lakes 24 are potentially dangerous. Similarly there are 45 glacier lakes in the Sun-Kosi basin with a total storage volume of 388 million cu. m out of them 10 are potentially dangerous.

It is almost certain that in the years to come our planet is going to be much warmer. Such climatic change will have adverse impact on Himalayan glaciers. Nepal must put more efforts into the studies of snow and ice primarily concerned with the glaciological problems arising in the Himalayas to promote sustainable economic and social development of our country.

Youths In Nepal Elections: From Social Media To National Platform By Sangya Dhakal 1 day, 2 hours ago

Skeleton In The Sandook By Hemant Arjyal 2 days, 1 hour ago

An Overture Filled with Confusion By Dr. K. Uprety 3 days, 7 hours ago

How Could Rising Inflation Disrupt The Nepalese Economy? By Hari Prasad Shrestha 6 days, 4 hours ago