Our country can easily meet for a very long time our demand for electricity by implementing medium-sized hydropower projects in conjunction with solar and other sources of inexpensive energy generation without resorting to costly large storage dam projects, like the Burhi-Gandaki, West Seti etc often embroiled in course of construction in various types of disputes resulting into indefinite delay and unexpected heavy cost overrun. 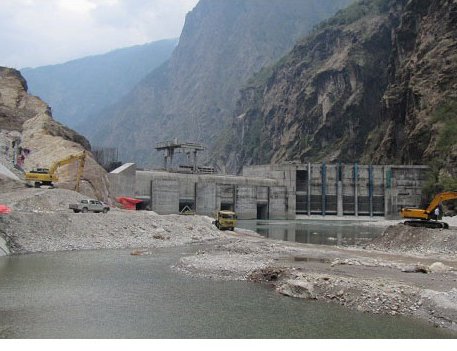 It is unfortunate that we all, policy makers, planners, politicians and intelligentsia alike are not seen showing the slightest concern over the devastation of economic potential of our water resources consequent upon our failure to understand the full value of this extremely valuable natural resources, whereas foreign experts on water resources are surprised at our ignorance and one of such experts has even cautioned us in a very straight-forward way "Nepal should beware of unintentional give away in hydro development.

The present institutions should be wary of giving away Nepali children's rightful inheritance."

Submergence and Taking Away Livelihood

Paul D. Terrell from the Bechtel International, who was chief advisor to Govt. of Nepal for the World Bank Financed Karnali Project, has expressed his concerns in an article published in the magazine HIMAL a long time ago in May, 1991 about the negative impact of large storage dams on environment and economy of our country. His opinion has now become even more pertinent. The following is his opinion.

- Nepal does not have too much of land. Snow-fields and glaciers are not habitable, and much of the country is too steep and mountainous for terracing by the hill farmers.

- On the one hand, reservoir space is needed to harness the water, on the other, land covered by the most economic reservoirs, in terms of large storage volume is the same precious flat land needed for agriculture.

-It is impossible to create a reservoir in Nepal without inundating people's homes and taking away their agricultural livelihood.

Our country can easily meet for a very long time our demand for electricity by implementing medium-sized hydropower projects in conjunction with solar and other sources of inexpensive energy generation without resorting to costly large storage dam projects, like the Burhi-Gandaki, West Seti etc often embroiled in course of construction in various types of disputes resulting into indefinite delay and unexpected heavy cost overrun. This is the view echoed by foreign experts from the internationally renowned institutions like the Bechtel International of the USA.

Nepal's economy would greatly suffer in consequence of implementation of large storage dam projects earmarked exclusively for power generation at a cost of sacrificing our valuable lands and valleys in the hills and overlooking engineering, economic and environmental aspects. However, such projects could still be justified if we are able to reap non power benefits also.

Our country is now planning to implement large storage dam projects, like the Burhi-Gandaki storage dam project, West Seti storage projects etc, exclusively for power generation whereas this type of projects would be automatically providing India downstream benefits ( irrigation, flood control etc.), which might far exceed the power benefit. Unfortunately our country would be deprived of our right to a legitimate share in downstream benefits from such projects accruing to India if we failed to reach an agreement on downstream benefit sharing before taking final decision on implementation.

The detailed feasibility study of the Multipurpose Kankai storage dam project carried out under then West German Government assistance and completed in 1980s shows that the annual irrigation benefit would be more than four times greater than the power benefit and such irrigation benefit would accrue entirely to Nepal. Unlike the case of the Multipurpose Kankai Project, the vast downstream benefits accruing from the proposed West Seti , Burhi-Gandaki, Karnali Chisapani, Tamar storage dam projects would be automatically passed on to India.

In India the demand for agricultural water dominates the total demand for water. India has the second largest population in the world. There are plentiful rains over most of the country but they are concentrated in a few months. As a result, India is already experiencing severe water scarcity.

According to Mr. Chaturbedi M.C. even by 2005 the total ground and surface water have already been assigned to users and further irrigation expansion are restricted.

It is quite hurting that in a sharp contrast to our country's irresponsible dealings on water resources even the most backward country in Africa, the Lesotho is wise to protect its national interest to reap full benefits from its multipurpose project by reaching an agreement with the South Africa on sale of regulated water flowing down after power generation to downstream country South Africa.

At present Lesotho is receiving in royalty 56 % of the net benefit accruing to the South Africa from the use of the regulated water discharged into the river after power generation.

Demand for water worldwide and also in India is rapidly growing as a result it is becoming increasingly scarce. Water has already become a valuable export item. But Nepal is totally unaware of this vast economic potential.

We should shelve the idea of implementing large storage dam projects providing large non power benefits exclusively to India until we reach an agreement with our southern neighbour on downstream benefit sharing.

India has already built Sarada Shahayak and Saryu canals in anticipation that Nepal would be implementing Karnali Chisapani or West Seti storage dam projects that would automatically provide abundant water to those canals. It has been clearly explained in the feasibility reports of those canals.