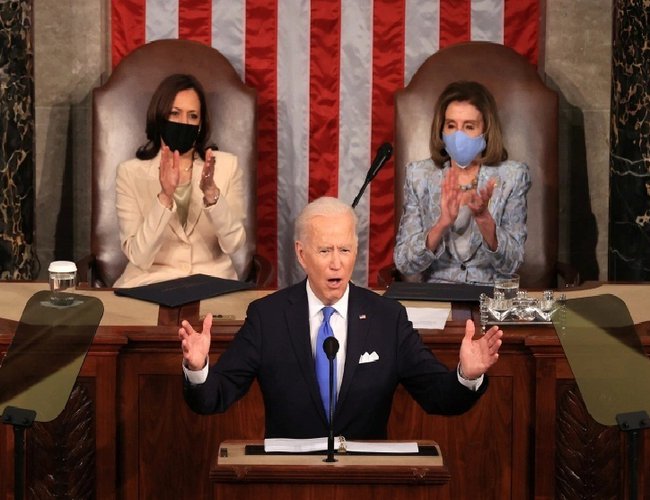 President says ‘America is on the move, again’ in speech to mark his 100 days in office.

United States President Joe Biden delivered his first address to a joint session of Congress on Wednesday night, telling Americans that the country is “moving forward” again, after the coronavirus pandemic claimed hundreds of thousands of American lives and crippled the country’s economy.

“After just 100 days, I can report to the nation: America is on the move again. Turning peril into possibility. Crisis into opportunity. Setback into strength,” Biden said.

Biden said that after promising 100 million COVID-19 vaccine shots in 100 days, his administration will have provided over 220 million COVID shots in his first 100 days in office.

He said that the coronavirus vaccines are being made available to nearly 40,000 pharmacies and over 700 community health centres.

Touting his $1.9 trillion stimulus package for Americans, Biden said that it has helped the country’s economy grow at a rate of more than six percent this year.

US President Joe Biden addresses a joint session of Congress as Vice President Kamala Harris and Speaker of the House US Rep. Nancy Pelosi look on [Chip Somodevillaat/Reuters]

The Democratic president also pleaded with the opposition Republican Party to support his sweeping tax plan that would help pay for his $1.8 trillion “American Families Plan”.

Brenda Lawrence, a Democratic congresswoman from the US state of Michigan said that while it is unusual for a sitting US president to address a half-empty Congress, Joe Biden managed to connect to the ordinary citizens who need to hear his message.

“What we saw tonight was a leader. The electricity that’s usually there in a room for the joint session of Congress, it wasn’t there. But what we saw was a conversation with the elected body of our government,” she told Al Jazeera.

Alexandria Ocasio-Cortez, a member of the Democratic Party has weighed in on US President Joe Biden’s speech, crediting activists and community organisers for fighting for progressive issues under the new administration.

Analyst says US will continue to be sharply divided

John Nichols, national correspondent of The Nation magazine, said that while US President Joe Biden delivered a powerful speech, he said that it is unlikely that he will get a lot of Republican support.

“I think the lines are very clearly drawn in this Congress. While President Biden will definitely reach out to Republicans, and while there are some Republicans who will meet with him…but there is a pretty clear divide that has developed now on almost every major vote that comes down.”

Democrats and civil society have welcomed the president’s speech as “bold”, welcoming his calls to expedite legislation for a fairer economy, and to address gun control and hate crimes.

“Tonight, the president delivered a hopeful report on the great progress we’ve made during his first 100 days in office, and charted an equally hopeful path for a lasting, fair economic recovery after the pandemic.”

Ukraine welcomes US Offer Of Long-Range Rockets By Agencies 19 hours, 10 minutes ago

US Shoots Down China's Balloon, Says Defense Department By Agencies 19 hours, 25 minutes ago

Zelenskyy Meets With EU Leaders By Agencies 1 day, 19 hours ago

Russians Advance On Bakhmut As Allies Mull Jets For Ukraine By Agencies 4 days, 20 hours ago