Lapid To Blinken: Disagreements About Iran Deal Can Be Worked Out Quietly

Lapid To Blinken: Disagreements About Iran Deal Can Be Worked Out Quietly 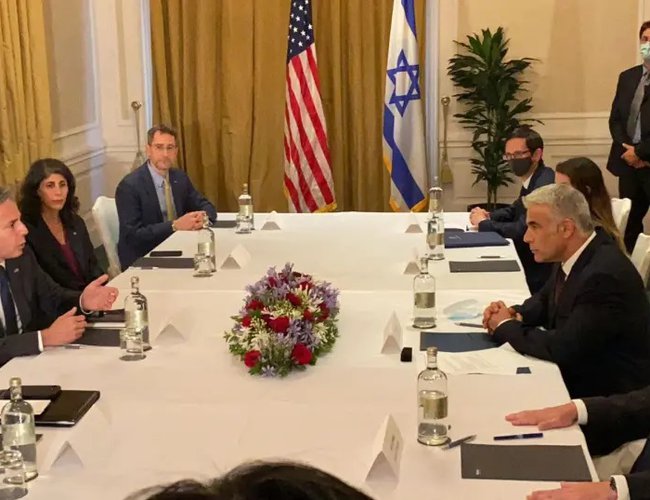 “Israel has some serious reservations about the Iran nuclear deal being put together in Vienna,” Israeli FM Yair Lapid said.

Israel and the US should not air their disagreements publicly but instead should discuss them directly, Foreign Minister Yair Lapid said Sunday at the start of a meeting with US Secretary of State Antony Blinken in Rome.

“Israel has some serious reservations about the Iran nuclear deal being put together in Vienna,” he said. “We believe the way to discuss those disagreements is through direct and professional conversations, not in press conferences.”

Jerusalem and Washington share the same goals, and disagreements between them are about how to achieve them, Lapid said.

“Mr. Secretary, I know we can count on you,” he added.

The US is Israel’s most important and most loyal ally, and the new governments of both countries come from “a very long and strong tradition of close friendship and cooperation,” the foreign minister said.

Lapid said he plans to work to rehabilitate Israel’s bipartisan support in the US, adding that he spoke with leading Democrats and Republicans in recent days to that end.

Engineer had warned of structural damage before Florida building collapse

“I reminded them all that Israel shares America’s most basic values – freedom, democracy, free markets, the constant search for peace,” he said. “In the struggle for those values, Secretary Blinken is a great friend and a great partner.”

Lapid also thanked Blinken for US support for normalization between Israel and Arab states.

“I look forward to working with you to widen the circle of peace in our region,” he said. “That is the best way to bring stability and prosperity to the Middle East.”

Other issues Lapid said were on the agenda for his meeting with Blinken were “strengthening our ability to defend ourselves, working to minimize conflict between us and the Palestinians, while making life better for Israelis and Palestinians alike.”

In addition, Lapid sent prayers and condolences to the victims of the building collapse in Surfside, Florida.

Blinken agreed with Lapid that the US-Israel relationship is “based... on a set of shared values and shared interests.” US President Joe Biden “feels very, very strongly about... a deep, enduring, abiding commitment on the part of the United States to Israel’s security,” he said.

Blinken put the reconstruction of Gaza at the top of the agenda for his meeting with Lapid.

“The work, I hope, can be done to, as you say, offer a more hopeful future for everyone, Palestinians and Israelis alike, with equal measures of opportunity and dignity,” he said, repeating a phrase Biden administration officials used throughout Operation Guardian of the Walls last month.

Blinken used the phrase “the Abraham Accords” – contrary to criticism of the Biden administration that it had refused to use the Trump-era branding – and said they “strongly support this, and hopefully there’ll be other participants.”

At the same time, Blinken said: “I think we’ve also discovered, or perhaps rediscovered, that as important as they are, as vital as they are, they are not a substitute for engaging on the issues between Israelis and Palestinians that need to be resolved.”

“We spoke at length about the normalization process in the Middle East and the need to expand it to cooperate with additional countries,” Lapid said at the end of the meeting. “Peace with Bahrain should be an example for the correct process that must occur in our region.”

Lapid said he and his Bahraini counterpart also discussed regional challenges, foremost of which is Iran.

Lapid plans to visit the United Arab Emirates on Tuesday in the first state visit by an Israeli minister to the Gulf state.