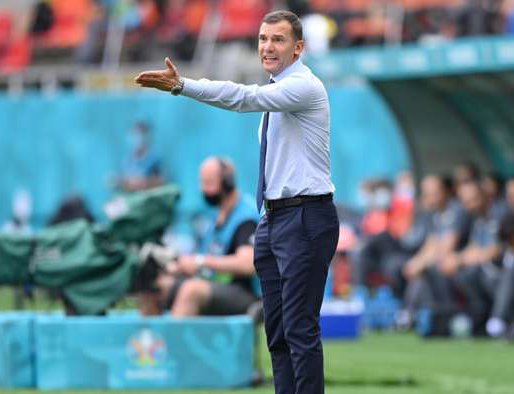 The former striker has taken his country further than they've ever been in a major competition, and is eager for the journey to continue

Andriy Shevchenko has told his Ukraine players that they shouldn't be scared of England, while insisting that "anything is possible" in the Euro 2020 quarter-final clash.

Ukraine booked their place in the last eight of the European Championships for the first time in their history by beating Sweden 2-1 after extra time in the Round of 16.

Shevchenko's side will now start preparing for a meeting with England, who recorded a 2-0 victory over Germany in the first knockout stage, with the 44-year-old well aware of the threat the Three Lions will pose in Rome on Saturday night.

“England are a great team, they have a deep bench, an outstanding coaching staff and we are fully aware how tough this game is going to be," the Ukraine boss told reporters after the Sweden win.

"I saw all their three group matches, not today's win over Germany because we had to prepare for our own game with Sweden.

"They are incredibly difficult to score against but their strength shouldn't scare us.

"It should motivate us because everything is possible in football as in life and we will play our hearts out to give our fans even more to cheer about."

Ukraine's route to the last eight

Ukraine opened their Euros campaign with a 3-2 defeat to the Netherlands, but impressed after initially battling back from two goals down before conceding a late winner.

They followed up that encouraging display with a 2-1 victory over North Macedonia, and despite losing their final Pool C fixture 1-0 against Austria, advanced to the last 16 as one of the four best third-placed nations.

Ukraine then produced their best performance yet against Sweden, with Manchester City star Zinchenko opening the scoring with a powerful strike just before the hour mark.

Emil Forsberg scored an equaliser to force extra time, but the Swedes were left with a mountain to climb after seeing Marcus Danielson sent off in the 99th minute, with Dovbyk eventually heading home the winner to send Shevchenko and his staff into raptures on the touchline.

The latest European Championships have thrown up more than a few surprises with France, Portugal, Germany and the Netherlands already out, and Ukraine will fancy their chances of claiming another major scalp at the weekend.

However, England will be heavy favourites to reach the quarter-finals after recording four consecutive clean sheets, with the winner set to be rewarded with a last-four tie against either Czech Republic or Denmark.