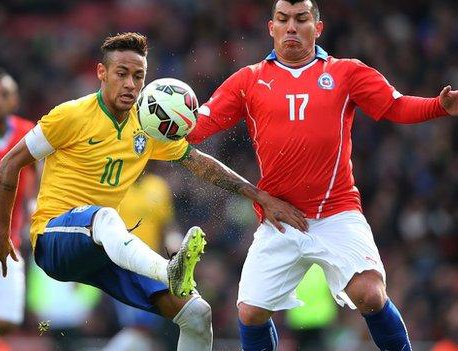 Brazil are into the semi-final and will face Peru in Rio de Janeiro. Chile couldn't pull off a shock by knocking out the holders, and their next game will see them face Brazil again in a World Cup qualifier in September.

10-man Brazil hold on to beat Chile 1-0 to reach the semi-final. Paqueta, who was brought on as a sub at the start of the second half, scored the winner less than a minute after coming off the bench when he slotted past Bravo following Vegas' poor clearance.

Two minutes later, Jesus was sent off after catching Mena in the face with a very high boot. Brereton looped a header onto the crossbar, Ederson denied Meneses late on, and Chile just couldn't find the equaliser they needed.

One last chance for Chile as we head into the final minute of stoppage time. Isla squares it to Palacios in space on the edge of the box, but he leans back as he hits the shot and blazes his effort high over the bar.

Chile can't do anything with the corner and Neymar breaks quickly on the counter again. He has two up with him in support and curls it towards Paqueta in space through the middle. His first touch is poor though and the chance is gone.

Chile are still keeping the pressure on here and Meneses does well to clip a cross towards Vargas at the far post. He has Militao tight to him though and the defender clears his lines.