2 Dead, 20 Missing After Mudslides Near Tokyo

2 Dead, 20 Missing After Mudslides Near Tokyo 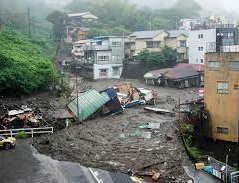 Huge mudslides have swept away houses near Tokyo leaving two people dead and about 20 others unaccounted for. Torrential rain has been lashing areas along the country's Pacific coast since early Saturday.

There have been scenes of devastation in Atami City in Shizuoka Prefecture. Police say at least 10 houses have been washed away.

About 200 personnel from the Self-Defense Forces and police are joining the search and rescue operation.

Officials issued the highest level of warning to around 20,000 households in the city after the mudslides. People there have been told to "secure safety immediately."

The local terrain is steep, and is packed with houses and some hotels.

One local said he fled to higher ground after he saw mudslides nearby.

An NHK drone snapped footage about 9 hours after the initial slide. It shows water still flowing with force as well as severe damage.

It's the height of Japan's rainy season. Meteorological Agency officials say the downpours are due to a lingering rain front.

Shizuoka and Kanagawa prefectures are getting the worst of it. The officials say the city of Atami has seen more than the average rainfall for the whole of July in just two days.

Weather officials are warning that saturated areas in and around Atami could pose more danger.

They say there may be more mudslides, swollen rivers and floods in low-lying regions. They're asking people to stay abreast of the latest evacuation information.

Shinkansen bullet trains between Tokyo and Osaka were suspended on Saturday. But they are now running again.

Ukrainian Soldiers Arrive In Britain For Tank Training By Agencies 9 hours, 17 minutes ago