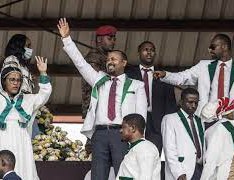 The election board said Abiy's Prosperity Party won most of the seats. Reuters reported that the party won 410 of the 436 seats.

The opposition, led by academics, challenged him for the office he has occupied since 2018.

Voting is held once every five years in more than 540 constituencies. It was originally scheduled to take place last year but was postponed due to the coronavirus pandemic.

But this year's voting was not held in Tigray and other regions which comprise 20 percent of all constituencies.

Tigray, in the north, has been in conflict with the central government.

Forces loyal to a local political power have retaken the regional capital, Mekele.

The result of the election could fan anti-Abiy sentiment in the excluded areas.