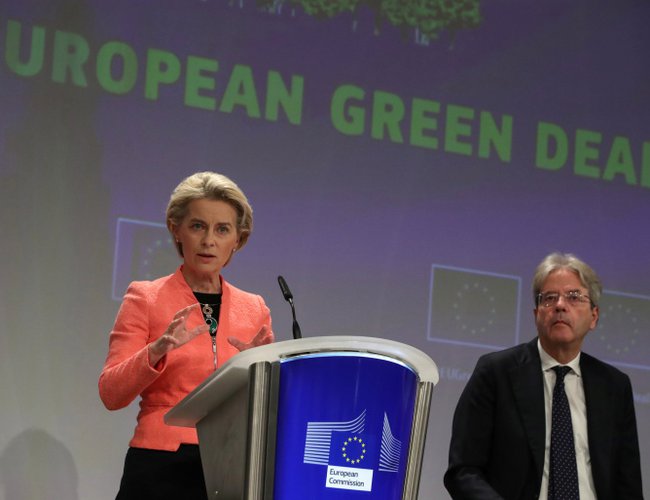 The European Union has unveiled an ambitious plan to tackle climate change. They say they want to secure the well-being not only of their generation but of their children and grandchildren.

Members of the European Commission set a baseline of 1990. By 2030, they want to reduce greenhouse gases emissions by 55 percent.

The European Union unveiled sweeping new legislation to cut greenhouse gas emissions by 55 percent this decade, aiming to turn green goals into concrete action and set an example for the world’s other big economies to follow.

Their roadmap includes a proposal to ban sales of new cars powered by gasoline or diesel from 2035. They want drivers to buy electric vehicles with zero emissions.

Automakers said it would be unfair to ban combustion engines. They said poorer countries do not have the means or the infrastructure to support electric cars.

The European Union also wants to tax countries for imports of steel, cement, and other products that raise emissions.

The proposals by the EU’s executive branch, the European Commission, range from the de facto phasing out of gasoline and diesel cars by 2035 to new national limits on gases from heating buildings.

The aim of the “Fit for 55” legislation, commission officials said, is to wean the continent off fossil fuels and take better care of the environment by policy design – rather than be forced into desperate measures at a future climatic tipping point when it is all but too late.

“The infernos and hurricanes we have seen over the last few weeks are only a very small window into what our future could look like,” European Commission President Ursula von der Leyen told reporters.

“But by acting now, when we still have the policy choices, we can do things another way … Europe was the first continent to declare to be climate neutral in 2050, and now we are the very first ones to put a concrete road map on the table.”

‘Wars over water and food’

European Commission Executive Vice-President Frans Timmermans said by failing to act now, “we would fail our children and grandchildren, who in my view, if we don’t fix this, will be fighting wars over water and food”.

The plan involves a revamp of the bloc’s emissions trading scheme under which companies pay for carbon dioxide they emit and introduces taxes on shipping and aviation fuels for the first time.

The commission wants to exploit the public mood for change provoked by the COVID-19 pandemic. It is already channelling more than one-third of a massive recovery package aimed at reviving European economies ravaged by coronavirus restrictions into climate-oriented goals.

The new legislation will involve about a dozen major proposals – most of them building on laws already in place to meet the EU’s old goal of a 40 percent cut in gas emissions by 2030, compared to 1990 levels – and must be endorsed by the 27 member countries and EU politicians.

World leaders agreed six years ago in Paris to keep the global warming increase to below 2 degrees Celsius (3.6 degrees Fahrenheit), and ideally no more than 1.5 degrees C (2.7F) by the end of the century.

Scientists say both goals will be missed by a wide margin unless drastic steps are taken to begin cutting greenhouse gas emissions.

“The principle is simple – emission of CO2 must have a price, a price on CO2 that incentivises consumers, producers and innovators to choose the clean technologies, to go toward the clean and sustainable products,” von der Leyen said.

Given the implications, the proposals are certain to be subject to intense lobbying from industry and environmental groups as they pass through the legislative process over at least the next year.

The plan will also be met with resistance because of the different energy mixes in member countries, ranging from coal-reliant Poland to nuclear-dependent France.

Among the most controversial elements is a plan for a “Carbon Border Adjustment Mechanism”. It will impose duties on foreign companies, thereby increasing the price of certain goods – notably steel, aluminium, concrete and fertiliser.

The aim is to ease pressure on European producers that cut emissions but struggle to compete with importers that do not have the same environmental restrictions.

The question is how the EU – known for its staunch defence of open trade – will ensure the carbon tax will comply with World Trade Organization rules and not be considered a protectionist measure.

Another concern is the need to help those likely to be hit by rising energy prices, and the commission is proposing to set up a “social climate fund” worth several billion euros to help those who might be hardest hit.

“This fund will support income and it will support investments to tackle energy poverty and to cut bills for vulnerable households and small businesses,” von der Leyen said.

It is likely many will not be able to afford zero-emission cars after 2035. Under Fit for 55, a drastic acceleration in sales of battery-powered cars is likely as the EU aims for a 100 percent reduction in auto emissions of C02.

The new measures will start to bite in the next several years, with a 55 percent reduction in average fleet carbon dioxide emissions by 2030 compared with 2021.

The Fit for 55 measures will require approval by member states and the European parliament, a process that could take two years.

A diplomat from one EU country said the success of the package would rest on its ability to be realistic and socially fair, while not destabilising the economy.

“The aim is to put the economy on a new level, not to stop it,” the diplomat said.

Zelenskyy Meets With EU Leaders By Agencies 20 hours, 55 minutes ago