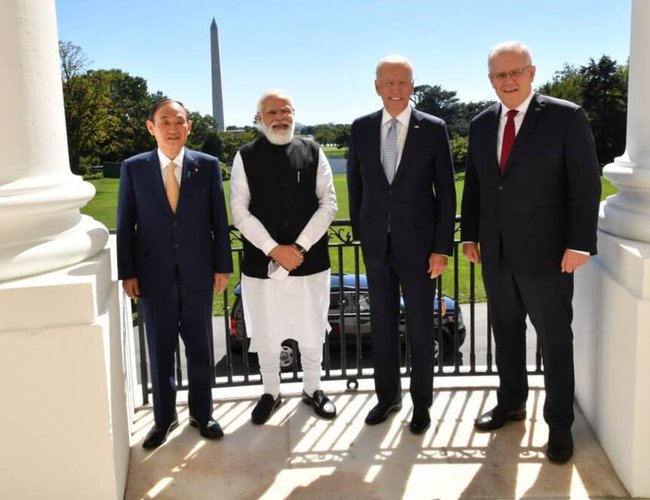 The leaders of Japan, the United States, Australia and India have released a joint statement on the outcome of their first ever in-person summit of the so-called Quad alliance.

In the statement, released on Friday, the leaders expressed their recommitment to a free and open Indo-Pacific. Apparently, with China in mind, they vowed to promote the free, open, rules-based order, rooted in international law and undaunted by coercion.

On the fight against the coronavirus, the leaders promised that in addition to doses financed through the COVAX Facility, their countries will donate more than 1.2 billion doses globally of safe and effective vaccines and ensure expanded production capacity.

The leaders pledged to promote hydrogen and other clean energy technologies with the aim of achieving global net-zero emissions by 2050 to tackle climate change.

The leaders said they have launched the Quad Principles on Technology Design, Development, Governance and Use that they hope will guide the world towards responsible, open, high-standards innovation on 5G and beyond-5G networks. They said they have also launched a new Quad infrastructure partnership to bolster supply chains of semi-conductors and other key components.

On cyber security, they vowed to work together to combat cyber threats and secure critical infrastructure through a new cooperation framework.

The leaders said their countries will share satellite data for peaceful purposes such as monitoring climate change and disaster response.

On education, they said they will establish a scholarship program and provide 100 graduate fellowships in the US to leading science, technology, engineering and mathematics graduate students in the four countries.

The Quad leaders called on the Taliban to provide safe passage to any person wishing to leave Afghanistan and to ensure that the human rights of all Afghans, including women, children and minorities, are respected.

The leaders reaffirmed their commitment to the complete denuclearization of North Korea in accordance with United Nations Security Council resolutions. They urged the North to abide by its UN obligations, refrain from provocations, and engage in substantive dialogue. They also confirmed the necessity of immediate resolution of the issue of Japanese abductees.

They said talks between the four nations' leaders and foreign ministers will be held annually, while senior officials will also meet regularly.

Ukrainian Soldiers Arrive In Britain For Tank Training By Agencies 9 hours, 2 minutes ago