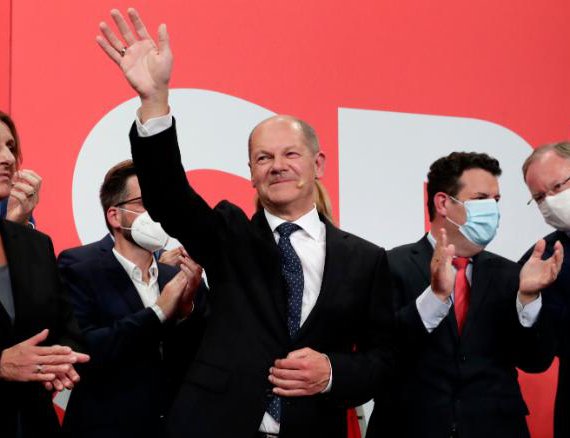 Germany's Social Democratic Party has secured the largest share of the vote in the country's tight parliamentary election. But the new leader to succeed Angela Merkel will be decided by a coalition of parties, which is likely to prove complicated.

The SPD's chancellor candidate, Olaf Scholz, and his rival, Armin Laschet of the CDU/CSU, say they are ready to negotiate with other smaller parties to form a coalition under their leadership.

The environmentalist Greens and the center-right Free Democratic Party will hold the key to the formation of the new coalition government.

The commission says the environmentalist Greens gained 14.8 percent of the vote, and the center-right Free Democratic Party has 11.5 percent.

The election has drawn keen interest both within and outside Germany, as it will decide who will succeed Merkel as chancellor.

Merkel has held the post for 16 years, demonstrating her powerful leadership on domestic affairs and international diplomacy reports NHK.

Ukraine welcomes US Offer Of Long-Range Rockets By Agencies 21 hours, 14 minutes ago

US Shoots Down China's Balloon, Says Defense Department By Agencies 21 hours, 29 minutes ago