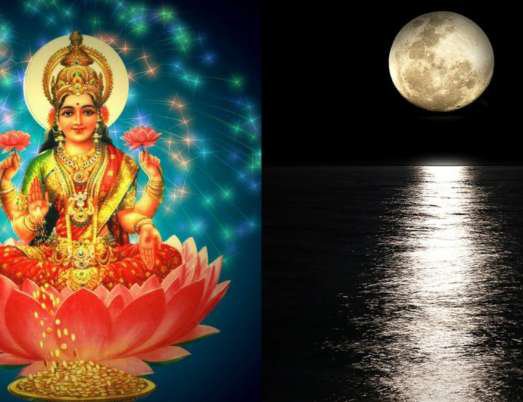 Kojagrat Purnima is a national festive day in Nepal. It is not a separate holiday, however, but is the final day of the 15-day Hindu festival of Dashian. Kojagiri Purnima 2021 date is October 19.

Dashain is the longest and most important of all holidays on the Nepali calendar. Kojagrat Purnima is not a public holiday in 2021. Schools and most businesses are open.

Kojagiri Purnima is observed on the full moon day in the month of Ashwin (September – October) as per Nepali calendar and is an auspicious day dedicated to Goddess Lakshmi.

The term Kojagiri is the corrupt form of 'Kojagarti' - which means who is awake.

Today, Kojagari means ‘staying awake’ and there is a popular belief that Goddess Lakshmi visits homes to look who is awake - She calls out 'who is awake' - and showers her blessings on those who are keeping vigil on the night.

Kojagrat Purnima which is also known as Kumara Purnima, Kojagiri Purnima, Navanna Purnima, or Kaumudi Purnima in different parts of Nepal and India, is the full moon day that falls in the Ashwin month of the Hindu Calendar.

Marking the end of the monsoon season, Kojagrat is also known as a harvest festival. It is widely believed that only on Sharad Purnima the moon appears in all sixteen Kala(s). In Hinduism, Kala is associated with each human quality and a combination of all sixteen Kalas is creating a perfect human personality. It is widely believed that on Sharad Purnima, Lord Krishna was born who is the reincarnation of Lord Vishnu

A unique fast is kept on the day by many people. They only drink milk and coconut water on the day. Dry fruits like cashew nut, pista, badam, anjeer etc are mixed in the milk and taken. This mixture is known as Kojagiri milk masala.

It is also the first full moon after the rainy season. Therefore people in large numbers come out to have a glimpse of the moon. Moon is the closest to earth on the day and people take advantage of the curative properties of the rays of the moon.

The day is also of great importance in Bengal, Orissa, Jharkhand and other parts of eastern India. Special pujas and worship are offered to Goddess Lakshmi on the day.

The day is also known as Kaumudi referring to the rays of the moon.

Many others believe since the moon has appeared with all the sixteen Kalas, watching the moon on this day and to be under the moon rays will heal and nourish the body and soul. The earth and moon come very close to each other and hence the proximity of the moon rays will have lots of benefits for the human body and soul. It is also considered that there will be the prosperity of wealth and good health on taking following vrats and preparing kheer for Goddess Lakshmi who visits the earth on this day. In certain parts of India, Sharad Purnima is also celebrated as the birthday of Goddess Lakshmi. Lakshmi, the Goddess of Wealth, is worshipped on this day and it is believed that the goddess visits the earth to watch her subject during the full moon night.

How is Kojagrat Purnima Celebrated?

Since the Sharad Purnima is also considered to be the birthday of Goddess Lakshmi, the Hindu Goddess of Wealth and prosperity, people prepare rice kheer, a sweet pudding, and are in the moonlight during the whole night. The next day the kheer is considered as blessed and the prasad is distributed to all the members of the family.

In the Brij region of Bihar, Sharad Purnima is also called Raas Purnima, when Lord Krishna performed the dance of divine love Maha-Raas.In the Odisha region, unmarried women fast with the popular belief of getting a suitable groom(kumara). This festival starts with maidens praying to the sun god just at sunrise with a coconut-leaf-made-vessel called 'kula' filled with fried paddy, fruits like coconut, banana, cucumber, betel nut, sugar-cane, guava, and then followed by 'Aarti'. In the evening women break their fast by preparing a dish with the fried paddy along with the fruits, curd, and jaggery which is offered to the moon god in front of the 'tulsi' plant. After this, the young women play games and sing songs under the light of the full moon.

Notice that the fasting for Sharad Purnima is been done on Pradosh day and Nishith Kaal Vyapini Purnima.

The devotee needs to take a bath in the morning and start the puja.

It is believed that goddess Lakshmi and Lord Vishnu bless their devotees with good physical and financial benefits on Sharad Purnima.

The whole night, the devotees awake and worship Lord Vishnu and Goddess Lakshmi.