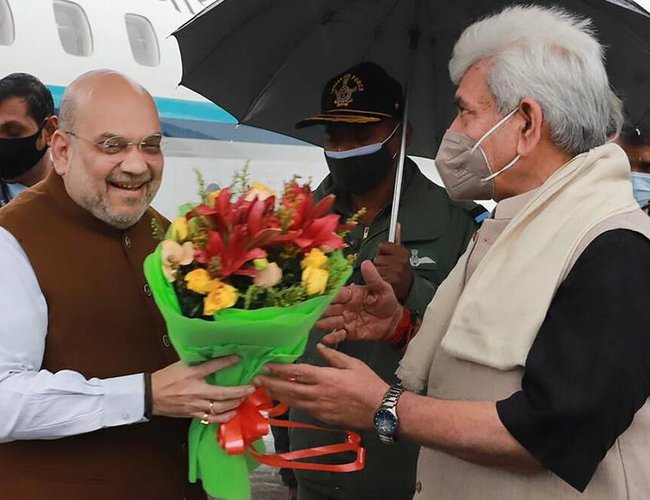 Amit Shah's J&K visit came in the backdrop of a series of civilian killings in the Valley and a hunt for the militants who killed nine soldiers last week in Jammu's Poonch area.

In his first visit to Jammu and Kashmir after its special status was scrapped in 2019, Union Home Minister Amit Shah on Saturday said instances of terrorism and stone-pelting have reduced since the abrogation of Article 370.

While addressing members of J&K Youth club, Shah stated that strict action will be taken against those trying to destroy peace or obstruct the path of development.

“Terrorism has reduced, stone pelting has become invisible…I want to assure you that strict action will be taken against those who want to ruin the peace of J&K. No one can obstruct development here. It’s our commitment,” Shah was quoted as saying by news agency ANI. “The date 5th August, 2019 (when the Parliament voted in favour of revoking of J&K’s special status under Article 370) will be written in golden letters. It was the end of terrorism, nepotism, corruption…J&K youth has to contribute in the development of the Union Territory, it is their responsibility.”

In what is being seen by security agencies as a shift in their strategy, militants have in 2021 targeted civilians and, more recently, members of the minority community in Jammu and Kashmir. Almost all civilian killings have been carried out by newly recruited terrorists or those about to join the ranks, using pistols, police said.

After arriving in Srinagar, Shah drove straight to meet the family of a police officer killed by militants. He later chaired a meeting to review the security situation in the Valley. He was received at the technical airport here by Lt Governor Manoj Sinha and advisor Farooq Khan.