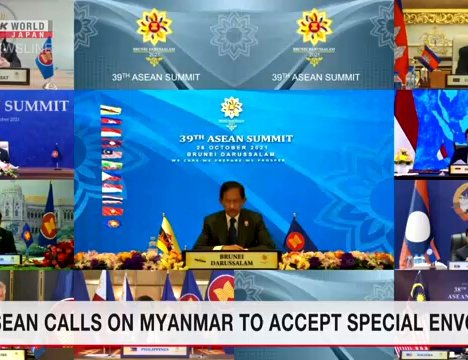 The Association of Southeast Asian Nations has called on Myanmar to accept the group's special envoy to mediate dialogue between the military and the pro-democracy force.

ASEAN held a summit online on Tuesday under the chairmanship of Brunei and issued a chairman's statement.

The statement expresses concern over the situation in Myanmar, where violence is continuing and deaths are rising.

It also calls on all concerned parties in Myanmar to "swiftly and fully" implement the five-point consensus agreed by ASEAN leaders in April. The April meeting included Myanmar's top military officer.

ASEAN invited a senior diplomat rather than the head of Myanmar's military to the latest series of summit meetings. But the military argued that this goes against ASEAN's principles and declined the invitation.

The statement rejects this argument. It says, "While respecting the principle of non-interference," the member countries reaffirmed their adherence to the rule of law, good governance and the principles of democracy and constitutional government.

It goes on to say they also "need to strike an appropriate balance to the application of ASEAN principles on the situation in Myanmar."

Separately, the statement also says some members expressed concerns about land reclamations, activities and incidents in the South China Sea.
The statement stresses the need to pursue peaceful resolution of disputes in line with international law.

No specific country is named, but the concerns apparently involve China, which has been stepping up activities in the area.