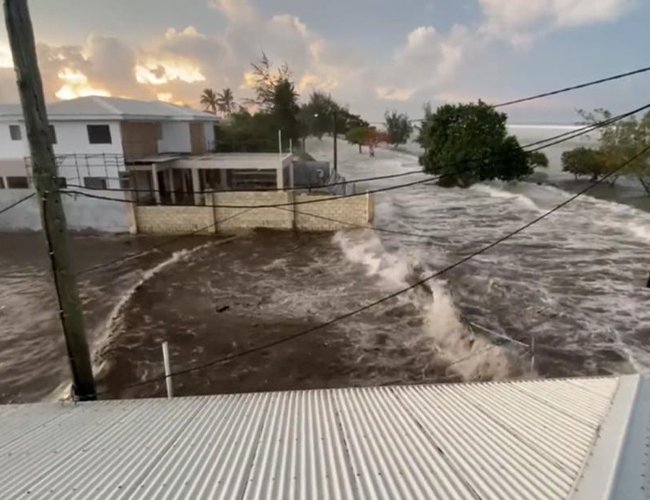 The extent of the damage following the massive volcanic eruption and tsunamis in Tonga is yet to be known. Media reports say internet connectivity with the Southern Pacific nation has been lost.

An underwater volcano around 65 kilometers north of the capital Nuku'alofa erupted Saturday afternoon.

Weather officials have issued a tsunami warning to the entire country.

The Pacific Tsunami Warning Center in the US state of Hawaii says tsunamis of up to around 80 centimeters high were observed in Tonga.

The height of tsunamis reached about 1.4 meters in Vanuatu, about 1.1 meters in the French territory of New Caledonia, and some 60 centimeters in the American Samoa. Tsunamis over one-meter high were also observed in Chile in South America.

Countries in the Pacific rim are continuing to warn their people against tsunamis.

An undersea volcanic eruption was observed off the South Pacific island of Tonga on Saturday.

Tsunami waves were recorded soon after in areas of the Pacific.

Images from the Himawari weather observation satellite show smoke from the volcano spread in a concentric manner and had covered an area of about 200 kilometers in diameter about one hour later.

Officials at the Wellington Volcanic Ash Advisory Center in New Zealand say the cloud of ash reached a height of about 15,000 meters.

Tsunami warnings were issued across wide areas of the South Pacific. Australia has also urged local residents in the south eastern coastal area to be cautious.

The US Tsunami Warning System initially said a magnitude 7.6 earthquake had been recorded in Tonga at 06:40 UTC on Saturday, but it was later downgraded.

Ukrainian Soldiers Arrive In Britain For Tank Training By Agencies 3 days, 14 hours ago

Japan To Lower COVID-19 Classification On May 8 By Agencies 5 days, 13 hours ago