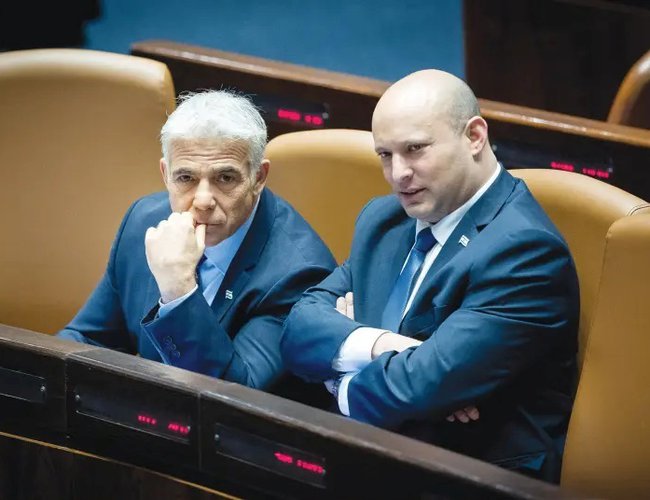 Israel will be entering its fifth election in 3 and a half years • Earlier in the day, the government defeated two votes of no confidence

Israel is heading to its fifth election in three and a half years, after Prime Minister Naftali Bennett and Alternate Prime Minister Yair Lapid gave up Monday on their efforts to stabilize the coalition.

In a joint statement, Bennett and Lapid said they would bring a bill to dissolve the Knesset to a vote next Monday. There is a consensus in the coalition and opposition on an October 25 date for the election.

Sources close to Bennett said the duo’s goal was to initiate an election on their own terms and not be forced out by opposition leader Benjamin Netanyahu.

Elections reactions: Netanyahu vows that Likud will lead next government

According to the coalition agreement, Lapid will become caretaker prime minister until the election and until the new government takes power. He is set to greet US President Joe Biden when he comes to Israel next month.

At a Knesset press conference, Bennett said his move to initiate an election was “not easy” but “the right decision.” He said he did everything possible to maintain the government for longer.

He wished Lapid well, calling him a “mensch” and vowing to ensure a smooth transition of power.

What are Naftali Bennett’s political options after he leaves PMO?

Lapid praised Bennett for “putting the country before his personal interest” and said their friendship had overcome obstacles. He called Bennett “a vital Israeli leader, innovative and brave,” and said he had no doubt his place was in the leadership of this country for many years to come.

“A year ago, we started the process of rebuilding, and now we’re carrying it on and carrying it on together,” Lapid said. “What we need to do today is go back to the concept of Israeli unity – not to let dark forces tear us apart from within. We must remind ourselves that we love one another, love our country, and that only together will we prevail.”

Bennett spoke on Friday to Attorney-General Gali Baharav-Miara, who told him the West Bank emergency bill could not be bypassed or extended beyond its June 30 deadline.

Because they had no way to pass the bill, Bennett and Lapid decided it would be better to dissolve the Knesset, which automatically extends the security regulations in the West Bank until three months after the next government’s formation.

At the press conference, Bennett said he had initiated the election to prevent chaos and harm to Israeli security.

Justice Minister Gideon Sa'ar blamed the downfall of the government on “irresponsible behavior by Knesset members in the coalition,” referring to its multiple rebels. He said the goal of the next election would be to prevent Netanyahu from returning to power and “mortgaging the country to his own personal interest.”

There is still a chance that Netanyahu will succeed in forming an alternate government within the current Knesset. This would happen if members of the coalition, from New Hope and Yamina, switch sides and join Netanyahu’s right-wing bloc.

At a Knesset press conference, Netanyahu did not rule out that possibility. He said he tried to initiate such a move but it was blocked by coalition MKs who rule out a government with him but are willing to sit with Ra'am (United Arab List). The opposition leader said he would not permit Ra'am leader Mansour Abbas in a Likud-led coalition.

"Once approved, the rotation will be performed in an orderly manner."

Netanyahu took credit for the government’s downfall and called it the “worst government in the history of the State of Israel.”

He vowed he would form the next government and that it would be “nationalist and wide.”

The coalition has been wavering for weeks as Yamina MK Nir Orbach decided to leave over its inability to pass the Judea and Samaria emergency bill, which is composed of temporary injunctions applying Israeli law to Jews in the West Bank.

Earlier on Monday, Orbach told Bennett he would not vote in favor of disbanding the Knesset this week, but he likely would next week. That helped persuade Bennett to dissolve the Knesset on his own.

Sources in Likud said Orbach would not receive a reserved slot on the Likud list because of his hesitation, but Yamina MK Idit Silman will.

Defense Minister Benny Gantz told reporters in the Knesset he was disappointed by the development because “the government did good work. It is too bad that the state has been dragged to elections.”

Russian Forces Hoping To Build On Gains In Eastern Ukraine By Agencies 9 hours, 24 minutes ago

Ukraine Says Its Forces Pulled Out Of Lisichansk By Agencies 2 days, 9 hours ago