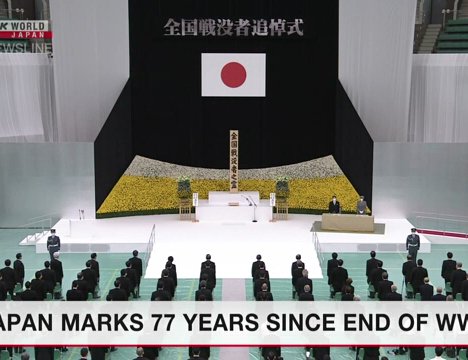 People in Japan are observing a solemn anniversary this Monday.

On August 15th, 1945, a statement from Emperor Showa was broadcast on the radio, announcing that the country had surrendered in World War Two.

Nearly eight decades later, Japan marks the end of that war... and prays for peace. Japan's government holds a ceremony in Tokyo every year to remember the approximately 3.1 million people who died in the war.

This year's ceremony marks 77 years since the war's end. Before the pandemic began in early 2020, about 6,000 people would attend. But the event has been significantly scaled down as the coronavirus continues to spread in Japan.

This year, about a thousand people are expected to attend. Prime Minister Kishida Fumio will deliver a speech before the country observes a minute of silence at the stroke of noon. Emperor Naruhito will then make an address.

As Japan commemorates the end of the war, the number of people alive who experienced it firsthand is in decline.

More than three-quarters of the relatives of the war dead attending this year's ceremony are over the age of 70.

Other events will be held throughout the day across Japan to remember the lives lost, and to reflect on peace.