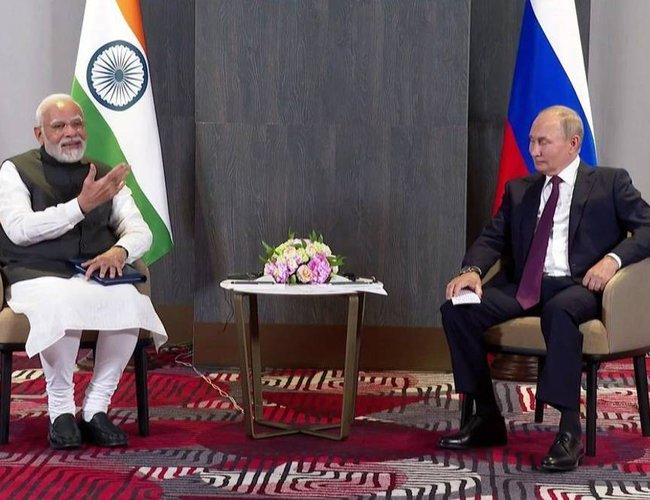 The invasion of Ukraine has left Russian President Vladimir Putin isolated from the US and its allies. He has even had to respond to "questions and concerns" from Chinese leaders. Now, Indian Prime Minister Narendra Modi has reminded Putin of his position in the world.

The leaders met on Friday during the summit of a regional economic and security group called the Shanghai Cooperation Organisation. Putin repeated to Modi what he told Chinese President Xi Jinping on Thursday.

He said, "I know your stance on the conflict in Ukraine. I know about the concerns that you voice constantly. We will do everything for it to end as soon as possible."

Modi called on his old friend to seek peace through any means necessary.

He said, "This is not an era of war, and I have spoken to you many times over the phone on this issue -- that democracy, diplomacy, and dialogue can make it clear to the world how, in the coming days, we move on the path of peace."

He said, "Our main target is the liberation of the whole territory of Donbas. That work continues, despite the attempts at a counteroffensive by the Ukrainian army."

Indian Prime Minister Narendra Modi thanked Russian President Vladimir Putin for assistance in evacuation of Indian students from Ukraine during their meeting on the sidelines of the SCO Summit in Samarkand.

"I want to thank Russia and Ukraine for helping us to evacuate our students from Ukraine," Modi said, according to the ANI news agency.

"Today, we'll get the opportunity to talk about how we can progress on the path of peace. India-Russia has stayed together with each other for several decades," he said.

Putin told reporters after the meeting that Ukrainian leaders are the ones who reject negotiations and that his troops are fighting for freedom.

Japan To Lower COVID-19 Classification On May 8 By Agencies 22 hours, 55 minutes ago