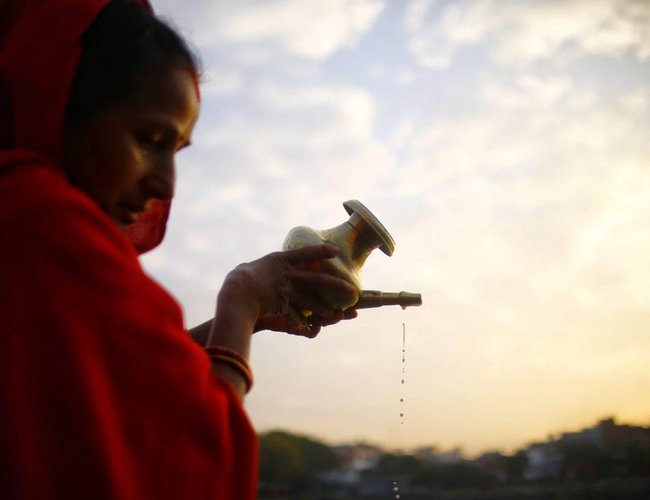 Chhath, the festival dedicated to the Sun god, concluded in Nepal's Mithila in the Janakpurdham district on Friday morning.

People, standing in the river water, made offerings to the rising Sun.

The devotees, who have been fasting since Monday from the day of Kartik Shukla Panchami, made an offering of water 'Arghya' and broke the fast.

The festival has a special significance in the Mithila region of the Himalayan nation. Nepali people celebrate the occasion with prayers for prosperity, happiness and longevity of the family members.

On Friday, devotees made offerings to the setting sun, offering various delicacies made sacredly and later distributed as prasad.

The holy dip into rivers, fasting and abstaining from even drinking water is an important parts of the celebrations.

The festival celebrated in Nepal's southern plains, especially in Mithilanchal - Sita's ancestral state, has lately attracted people from the hills.

The Chhath festival formally begins from the fourth day from the day of Laxmi Puja of the Tihar festival. Chhath festival is associated with the worship of the sun god and the goddess Chhathi Mata.

Clay and bamboo-made wares which are also needed are purchased.People are also clearing and cleaning the ponds and river banks for building special spots for performing the Chhath rituals.

The local FM radio stations have started playing the Chhath songs.Holy ponds like Ganga Sagar, Dhanush Sagar, Agni Kunda, Angarajsar, Dashrath Talau etc in Janakpur are being decorated in preparation for the festival.Offerings are made to the sun god and Chhathi Mata during the festival. Special cookies are prepared for offering to the deities. This festival is observed wishing for the good health, happiness and prosperity of the family and community.