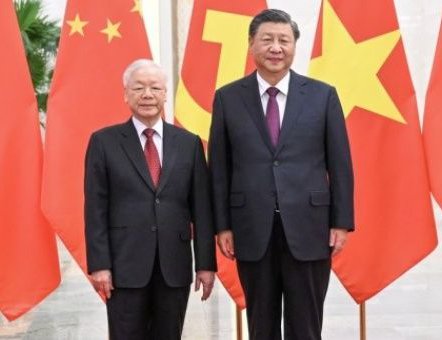 State-run China Central Television said Xi told Trong that both countries would never let anyone interfere with their progress, as they are advancing socialist modernization with all their power.

This was Xi's first meeting with a foreign leader since he secured a third term as the leader of the ruling Communist Party at the party's congress last month.

The leaders also agreed to elevate the comprehensive strategic partnership between their countries to a new level.

The meeting is widely seen as a sign that Beijing is seeking closer relations with neighboring Vietnam, as the United States works to boost its ties with Southeast Asian countries.

It appears that Vietnam, though embroiled in territorial disputes with China in the South China Sea, is also seeking closer economic relations with China.

Xi is ramping up his diplomatic activities. He is scheduled to meet Pakistani Prime Minister Shehbaz Sharif and German Chancellor Olaf Scholz during their stays in China this week.