US Republicans Win Back House

US Republicans Win Back House 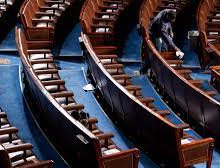 In the United States, Republicans will win back the House of Representatives. That means President Joe Biden will have to work with a split Congress and the legislative challenges that come with the division.

Republicans went into Election Day last week boasting they would overwhelm Democrats in a "red wave."

But only now have they captured the 218 seats they needed to take the chamber back.

Both sides are waiting to see who will win a runoff next month for a Senate seat in Georgia.

But the Democrats have already captured the 50 they need to retain control of the upper chamber. The Constitution gives Vice President Kamala Harris the tie-breaking vote.

The president's party almost always loses support in these elections -- something known as the "Midterm Curse." But the Democrats avoided the full scale of predicted losses and defied history.

Former President Donald Trump supported hundreds of candidates. Many suffered defeat. But Trump has already announced another run for the White House.