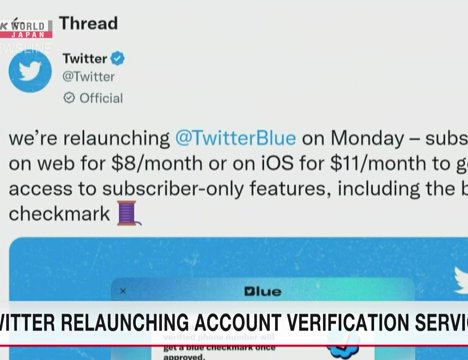 Twitter says it is relaunching subscription service on Monday. The service offers users verification of accounts for 8 dollars a month, or 11 dollars a month for Apple users.

The company also said it would give the blue checkmark to individuals including non-celebrities, while businesses would receive gold, and grey for government accounts.

Twitter introduced the service in November, but paused a few days after the launch after fake accounts mushroomed. It pledged to take measures to prevent such accounts from cropping up.

Twitter's advertising revenue has fallen after Elon Musk took control of the company, partly because the number of discriminatory tweets has increased. Observers say Twitter seeks to improve its bottom line with the new service.

Ukrainian Soldiers Arrive In Britain For Tank Training By Agencies 15 hours, 37 minutes ago