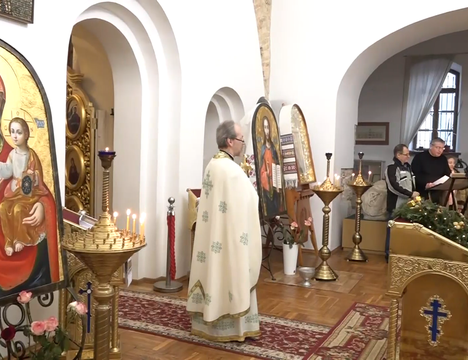 Some of Ukraine's Orthodox churches held Christmas Masses on December 25 in a break with the Russian Orthodox tradition that observes Christmas on January 7.

About 50 Christians prayed for peace at a church on the premises of St. Sophia Cathedral in the capital Kyiv on Sunday. The worshippers also sang the Ukrainian Christmas carol.

Russia continued to attack Ukrainian cities on Christmas Eve and Christmas Day. In the southern Ukrainian strategic city of Kherson, 16 people were killed in the Russian assault.

He said, "We are ready to negotiate with everyone involved about acceptable solutions, but that is up to them -- we are not the ones refusing to negotiate, they are."

In a video message released on Sunday, Ukrainian President Volodymyr Zelenskyy thanked all the people, including soldiers and volunteers, who are doing everything so that people in Ukraine can live.

He also thanked "the leaders and peoples of the world, who this year, together with Ukraine, became leaders in the defense of freedom."

He said, "There are only a few days left this year. We must be aware that our enemy will try to make this time dark and difficult for us."

Zelenskyy Meets With EU Leaders By Agencies 24 minutes ago