"We Have Given Options To Opposition"

Former minister and General Secretary of Terai Madhesh Loktatrik Party, a major constituent of the present coalition, Sharbendra Nath Shukla is a popular politician from western Madhesh. As the demand is growing for the formation of national consensu 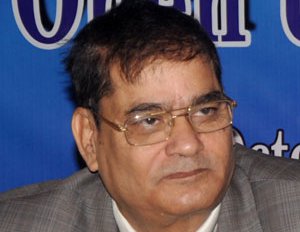 What is the political way out?

Opposition political parties also agree with you. How do you see their demand to form national consensus government under their leadership?

Opposition parties including Nepali Congress have already proposed NC leader Sushil Koirala as their candidate. How do you look at it?

Despite their tall claim, opposition parties want the chair of prime minister. They are not sincere to the elections of CA. Had they really been sincere for the poll, they would have joined the government long time back to create conducive environment to hold the elections. Instead of giving any new options, opposition parties are just demanding chair of prime minister. This is a legitimate government and it is unconstitutional to hand over chair to other parties. We have also given them options.

Can you explain the options?

The first option is to join the present government. Second option will be to nominate new prime minister from the present coalition to replace Dr. Baburam Bhattari. Our third option is to form a neutral government under an independent person. However, the opposition has rejected all of them. They just want chair for them and nothing other than that.

Do you think elections can be held by April?

What is the stance of Samyukta Loktantrick Madheshi Morcha (SLMM)?

We have already submitted nine point demand. One of our demands is to give the continuity to the present government. We have already appealed opposition parties to join the government and hold the elections.

How do you the demand for the revival of dissolved Constituent Assembly?

It is mere a dream and it is an impossible demand. Only way out for the present political crisis is to hold the elections for new CA. Nepal's all political parties and people also want this.

What is the issue for new elections?

One of the major agenda for the elections will be to provide elections right to over 7 million populations. They are denied right to vote on the ground that one cannot register in the voter list without valid citizenship certificate. At a time when 3.5 million Nepalese are going abroad and more than 3.5 person who born from an inherent citizens of Nepal are yet to register in Voter Identity card due to failure to get the citizenship certificate. The government has to amend the Citizenship act to pave the way for 3.5 million populations to get the citizenship so they can vote.