The ODF movement is progressively increasing to meet the set target. A proper decentralized mechanism of water and sanitation hygiene (WASH), from the bottom to the top, offers a good example in comparison with the development of other sectors. 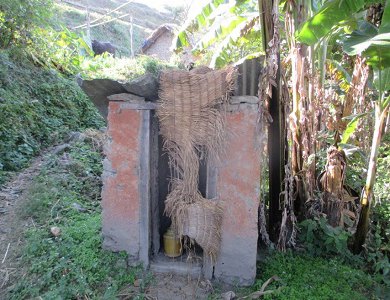 Nepal's struggle for development of sanitation after the first 5-year development plan is a significant breakthrough. After a great effort to legitimate the issues at the forefront, through collective effort of entire stakeholders at different spans of time, the beginning was praiseworthy as well as the achievements till date.

The sanitation movement in Nepal is in full speed to set new records within South Asia. In light of this, the declaration of the open defection free (ODF) zones is no longer news. The ODF movement is progressively increasing to meet the set target. A proper decentralized mechanism of water and sanitation hygiene (WASH), from the bottom to the top, offers a good example in comparison with the development of other sectors. Data reveal that the water supply facility coverage is 83.59% whereas sanitation coverage has exceeded 70.28% (NMIP, 2014).

Open Defection free (ODF) and access to improved and hygienic toilets are the basic indicators for assessing the state of sanitation. ODF is a major component and bottom-line for sanitation promotion. In other words ODF is mandatory for best sanitation promotion, that is, construction of toilets is compulsory. Recent remarkable progress in life expectancy is a major achievement of Nepal, in which a large credit goes to sanitation movement, eventually contributing to Human Development Index.

Decentralized mechanism of promoting water and sanitation hygiene is making citizens more responsible for construction of toilets and sanitation facilities in the community. The current sanitation movement has been able to make people self-aware about the nexus of toilet and human health. But then, it is difficult for many to think about construction of toilets while they are struggling to feed their family twice a day. For low income families, constructing toilets is a mammoth burden. On the other hand, we may be making unjust decisions for the poor, like, denying government services for those without sanitation facilities, deducting marks for children at schools for lack of sanitation and avoiding giving them membership of political clubs and parties -- something practiced elsewhere in the name of the movement by rejecting the poor people's aspirations and their ground reality.

Social harmony and mutual cooperation are results of huge charisma and character of the Nepalese society. The time has already knocked the door to make this character intact. In contrast to this, the negative impact on academic and social life of single children by deducting marks in schools is major aspect of consideration by decision makers. Not only that but also other emotional factors associated with such rejection may create a more serious situation in the society.

The global debate and discourse on sustainable development is at the front line of intellectuals and academicians. Sustainability is a major crux and challenge behind achieving sustainable development. In an ODF movement, perception of toilet construction is only clicked at first. Whereas, sustainability aspects of toilet is forgotten. Sustainable development practices seek sustainability of any activities, rolled out at any time, but our current practices reflect lack of chances for sustainability of our existing work. This will finally lead to the process of failed development. As they say: "Time is a big resource for poor." In our current context, it is more important and practical to generate food and clothing for the poor families rather than asking them to take the loan to buy equipment necessary for toilet construction. For instance, a poor family that constructs toilet by taking loan might need to sell everything tomorrow to feed the family and pay back the loan and interest. Our past practices and development initiatives have led this situation.

"Injustice anywhere is threat to Justice Everywhere." We are not separate from one another in this inter-connected global village. Injustice to an individual really pains another individual in another world. A pathetic achievement wouldn't last. Likewise, an unjust decision to one poor family really strikes another poor family of a different place. The cost of such injustice is not measurable or reparable.

Internalizing the global scenario and context is a pertinent factor to boost the issue via justifiable policy at both national and local levels, but one shouldn't be victim of any policy, formulated by experts without considering the poor people's ground realities. The current initiatives for sanitation promotion have made remarkable progress and are praiseworthy for their collective efforts and joint action. On the contrary, it is highly valuable to make acceptable, realistic and viable policies to help the needy, unreached communities, taste the charm of development.

Aryal is a Program Assistant of Federation of Drinking Water and Sanitation Users' Nepal(FEDWASUN). He can be reached at bishesh.aryal00@gmail.com