Despite making several efforts, Nepal may still suffer huge losses in terms of human casualty and economic damage in the event of a major earthquake. However, nobody seems to be seriously talking about the economic dimensions of natural disasters 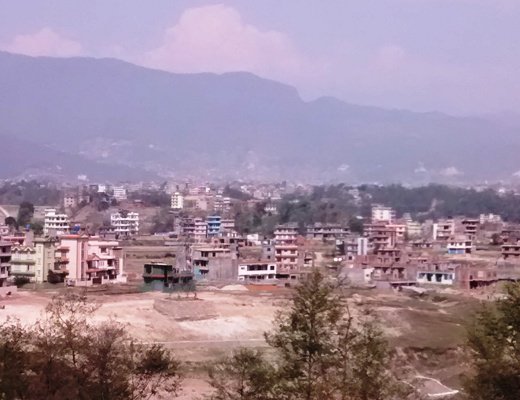 In case of a major earthquake in Kathmandu, comparable with that of 1934 or one above 8 in the Richter scale, the valley will see a complete ruin. Over 60 percent houses will collapse and there will be a huge loss of life. Such an unfortunate event will have greater impacts on the national economy.

It is a scientifically proven fact that Nepal faces a high risk of earthquakes. When an earthquake occurs, it may bring serious disasters for people with inadequate safety or coping capabilities.

Annually, the National Society for Earthquake Technology Nepal (NSET) organizes the Earthquake Safety Day to remind the people of the great earthquake of 1934. However, the safety issue is yet to be taken in all building constructions.

New Road city, which was built after the great devastation following the safety measures, is now completely destroyed, as people were erecting unsafe and unsecure tall buildings, ignoring the risks.

According to a report published by the Ministry of Home Affairs, with support from JICA,  Kathmandu is unlikely to remain as the capital of Nepal in case of a major earthquake like that of 1990 B.S.

“Kathmandu may not be in a position to govern Nepal socially, politically and economically after a big quake. Finally, everything lies in the economy and the economy is everything. The quake will incur a huge economic cost. We are a member of UN and various UN agencies have predicted that Nepal’s economy will have to bear a heavy burden, even to the extent of being impossible to revive, in case of a major earthquake in Kathmandu,” said Amod Mani Dixit, executive director and general secretary of National Society for Earthquake Technology –Nepal (NSET) (See Interview)

Experts argue that earthquake is a natural phenomenon and one cannot prevent it. However, what one can limit is the damage and loss of human life by following safety measures.

Nepal’s growth rate is at stake due to disaster risks, leading to annual average economic loss of around Rs 1 billion.  “Nepal suffered a loss of over Rs 40 billion due to disasters while 32,802 individuals lost their lives and around one third of the country’s population (6.95 million) was affected in the period between 1971 and 2013. The financial loss alone speaks volumes about why we should worry about natural hazards and disaster risks,” said Dixit.  “What we need today is the awareness at all levels that disaster preparedness, such as building code implementation, is not for the purpose of revenue generation but for safety.”

Although Tokyo and California are also prone to earthquake like Kathmandu and these cities are also expecting major earthquakes, their damage of infrastructure and human loss is likely to be much more nominal than it will be for Nepal.

“In terms of loss of humans, Kathmandu will have to see a much larger casualty and devastation than those cities as the settlement of Kathmandu city is unsafe,” said Dixit.

Disaster as an Opportunity

On the flip side, natural disasters also bring economic opportunities. After the  great earthquake 1934 in Nepal, New Road was planned to accelerate the economic activities. The reconstruction and rehabilitation brought much more economic benefits and transformations of the society. However, the preparedness of business communities is also a matter of concern for them to take disasters as ab opportunity.

“As the Nepalese business sector has not made any continuity plan and sensitized itself about the risk of quake, business people will also be victims. If the houses and industries of the business communities are unsafe, they will also lose the opportunities. "

Although destruction and devastation like collapse of buildings, bridges, death and injury of people, short supply of drinking water and electricity will be there on the one side, there will also be business opportunity on the other side.

For developed countries like Japan, disasters cannot pose any threat for their survival. However, countries like Nepal will have major consequences in such a case.

The indirect cost of disasters is much higher. It would have several repercussions. Yet what we lack is a serious discussion in terms of loss, damage, opportunity and repercussions. Eighty percent of risk of quake lies in houses and infrastructures. However, there is no role of Ministry of Urban Development.  Ministry of Finance seems to have no interest at all whether there is a quake or not. The quake of September 2012 devastated a large area in eastern Nepal but nothing has happened in terms of addressing the situation or preparing for another. According to the Ministry of Urban Development, 30,000 houses were damaged and were in desperate need of reconstruction.

Although all will have to face the losses, small businessmen, particularly grocers, suffer the worst in case of disasters. Although several efforts have been made to raise awareness among industrialists and business communities, Nepalese businessmen are not preparing for the eventuality of disaster or to grab the opportunity in that case.

As other common people, they are themselves living in vulnerable houses and their industries are also at risk. “If they themselves are unsafe, where is the question of these people tapping the benefits thrown up by the earthquake."

Although eighty years have already passed since the country was rocked by a major earthquake of over 8 Richter scale, Nepal's risks and vulnerabilities are yet to come down .

According to National Seismological Center, Nepal annually felt around 100 earthquakes measuring above in 2 Richter scale. As Nepal lies in an earthquake zone, there are many earthquakes below 2 in that scale.

The earthquake of 1934 A. D. is the most devastating earthquake that ever occurred in the territory of Nepal with casualties of more than 16000 people, including from Nepal and India put together.

“From the available data there has been no earthquakes of magnitude greater than 8.0 Richter scale in the gap between the earthquakes of 1905 A. D and 1934 A. D. and there is a real threat that a major earthquake may occur in this gap that will affect Western Nepal,” said the Center.

As studies have shown that Nepal will have to face a major earthquake any time soon, Nepal needs to prepare for minimizing the human casualty and economic loss in the event of a major quake.

The Impact Of Disaster Prevention Education Implementing SFDRR In Nepal By Kazuo Arai 6 days, 14 hours ago

Commentary On The Preamble Of Padma Shamsher's Government Of Nepal Act, 1948 By Dr. Bipin Adhikari 1 week, 4 days ago

Why Nepal’s Policymakers Are Obsessed With Hydropower? By Pratik Poudel 1 week, 6 days ago