Was Nepal a Soft Power Victory for China?

China and India competed to send aid after Nepal's devastating earthquake. Experts discuss whether the strategy was a boon for China's image there. 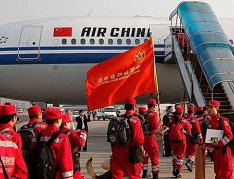 China, all too familiar with the horrors of major earthquakes itself, has responded with search-and-rescue teams, medical supplies, and other aid. (Kathmandu refused Taiwan’s offer to help with rescuers, though accepted its medical aid.) In this ChinaFile conversation, experts discuss the effect of this aid on China’s relations with Nepal.

Nepal’s fear of getting things wrong in its relationship with its powerful neighbor in the north is such that even in this time of crisis, it cannot afford to ignore what China terms its “core interests.” Hence its refusal of official aid from Taiwan, which has the resources and experience in dealing with such devastation. Nepal also reportedly warned the Indian army rescue team not to fly near China’s airspace—although the area most affected by the earthquake and most in need of emergency relief is the border area between China and Nepal.

The responses of both China and India to the relief work have been laudable and timely—within six hours of the earthquake Beijing had dispatched an emergency task force to Kathmandu and the border regions.

China has been one of the major donors of aid to Nepal for decades. Since the 1960s it has been, along with India, one of Nepal’s main sources for infrastructure development. But Nepalis have a much more positive perception of China than India. Particularly among the elite, China has a positive image not because of aid but because it has replaced India as the source of sought-after goods. Among Nepali social media users, China’s mobile messaging app WeChat appears to be the most popular means of communication. While a few decades ago the view from the Nepali side of its border with Tibet was that the Tibetan side was poor and underdeveloped, today it is just the opposite.

Despite China’s aid, and its cornering of the market in luxury and other goods, the Nepal-China relationship remains almost entirely confined to the government and the elite. There is hardly any people-to-people contact between Nepalese and Chinese. The earthquake in Nepal did not arouse a wave of public sympathy in China, unlike the mass support and concern conveyed in India, where there have been public vigils in multiple Indian cities.

India has an open border with Nepal. Millions of Nepalis work in India and some groups along the Himalayas feel their home to be both in India and Nepal. There is hardly any Nepali family that does not have members living or studying in India. There is also the shared familiarity of Hindu culture. Compared to this, China remains a distant and alien culture and society for most Nepalis. But it is China’s distance and remoteness that has earned it a positive, even awe-inspired image among its southern neighbors.

The Nepali government was caught unprepared to deal with the tragedy that arose as a result of the earthquake. By and large, the Nepalis recognize that they should welcome most Chinese, Indian, as well as international aid. It’s unfortunate but perhaps understandable that Kathmandu declined Taipei’s offers of post-quake aid, in order to maintain a strategic distance from Taiwan.

Nepal’s relationship with China has improved since 2006, when Nepal became a democratic republic, coinciding with China’s modern economic rise and its aspirations to play a bigger regional role. At the same time, some 300 million middle class Chinese began to travel — Chinese now comprise one of the largest groups coming to Nepal. Some adventurers are curious about what lies on the other side of the Himalayas; others search for the birthplace of Buddha.

Nepalis see Chinese aid as positive because it’s focused on infrastructure development, an area in which Chinese seem to have done a good job.

Meanwhile, Nepalese often view Indians, with whom they have close historical, cultural, religious, and linguistic ties, as big brothers. It’s a complex relationship that has elements of intimacy and mutual respect and at the same time contains a significant amount of suspicion and tension. Many talk about this in terms of a somewhat insensitive big brother dealing with a significantly weaker younger brother.

Nepal's Over Dependency And Sluggish Development By Hari Prasad Shrestha 7 hours, 43 minutes ago

Nepal Is Bearing The Disproportionate Burden Of Climate Change By BHARAT RAJ PAUDYAL 3 days, 11 hours ago

Refugees In Nepal: Recognition And Inclusion By Deepesh Das Shrestha 6 days, 6 hours ago