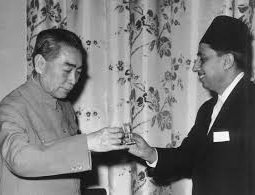 Sixty years have already passed since the establishment of diplomatic relations between Nepal and China . Political systems and regimes have changed in these decades. However, the core strategic dynamics of Nepal and China’s policy towards Nepal have remained unchanged.

Chinese scholars see stability in Nepal is a prerequisite for their country's security. The northern neighbor’s choice in Nepal, therefore, is to ensure political stability and economically strong and reliable situation.

No matter who rules Nepal, China’s policy towards it is to always support the forces of stability. After establishing the bilateral relations during the first phase of the interim period in 1955, Nepal went through six constitutions and three different political systems in the last sixty years but what has remained unchanged is the stable relations between Nepal and China.

Late Leo E.Rose in his book, Nepal Strategy for Survival, talks about China’s interests in Nepal. Similarly, Chinese scholar Wang Xung, in his book, Nepal’s National Defensive Strategy and Nepal China Relations, writes given the past experiences, Nepal’s independence is a pre-requisite to China’s security.  "Nepal needs to be stable to maintain its independence.”

With regimes from active monarchy of early days to short lived multi-party government of Nepali Congress, thirty years of Partyless Panchayat, decade long practice of constitutional monarchy and multi-party democracy to Federal Republic now, China has maintained cordial relations with all their governments.

As it is committed to non-interference on internal affairs, China always avoids making comments on internal political systems and constitution of Nepal as well as change in the political leadership.

Even with the rise of China as a top world economy and growing international clouts in the recent years, its policy towards Nepal has remained unchanged. However, Nepal is yet to take benefits from its economic progress.

Due to delay in the removal of electric polls and installment of drinking water and sewerage pipes, the expansion work of ring road has already suffered and failed to meet the deadline.

China has shown that it is there to support Nepal whenever there is crisis. China’s prompt support during the earthquake is an example. At a time when Nepal and China officially celebrated sixty years of bilateral relations, Nepalese Army along with Chinese Armed Police force jointly started work to reopen Kathmandu-Kodari highway, which was closed since the major earthquake of April 25.

As agreed, China promptly started work on resuming the Araniko Highway damaged by landslide triggered by the earthquake, the under-construction dry port at Larcha of Sindhupalchowk which was damaged by the same landslide and the customs office at Rasuwagadhi.

Although Ministry of Foreign Affairs hosted a reception and Nepal Chamber of Commerce hosted a public march to formally celebrate sixty years of establishment of bilateral relations, launching the reconstruction of highway was more significant than just being a celebration.

“One can see Nepal-China relations as stable all the time because we respect each other’s sovereignty and non-interference in internal affairs,” said Foreign Minister Mahendra Bahadur Pandey. " During the earthquake, China provided generous support and its willingness to provide post conflict support is exemplary.”

Chinese Foreign Minister Wang Yi, during the International Conference on Nepal's Reconstruction, on 25 June, announced a package of aid to the tune of 777 million dollars for the next three years.

Opened in 1965, Kathmandu-Kodari highway used to be the second road network linking Nepal to outside world through Tibetan Autonomous Region. With the railway link to Tibetan Autonomous Region, Nepal’s trade with China has tremendously increased. Instead of bringing goods via long sea route through Indian Territory and custom points, Nepalese traders have preferred this route for trade with China.

Despite the opening of Syaphrubeshi-Kerung road last year, Kathmandu-Kodari has remained the shortest route to trade with China. This transport route also helps to diversify Nepal’s trade reducing dependency with India.

In the last sixty years since the establishment of bilateral relations, China’s whole efforts are to reduce Nepal’s dependency and enable it to be independent.

From sugar mill to leather, shoe and brick factories to paper and cotton mills, China has constructed more than 31 projects during these past 60 years. The economic and technical assistance provided by China has helped develop infrastructure and decrease import dependence.

Similarly, China supported the construction of road in the middle hills paving the way to expand the north-south linkage, which is vital to increase the frequency of interactions.

Naubishe-Pokhara and Pokhara-Baglung middle hills highways have reduced Nepal’s connection to northern villages. The opening up of Mugling-Naryanghat-Gorkha shortens the distance between Kathmandu and rest of Nepal. China has constructed eight major highways and roads in Nepal.

China started its foreign aid program by providing Nepal direct cash when Nepal was in a foreign currency crisis. The Chinese government provided 10 million rupees worthy Indian currency soon after the establishment of the bilateral relations.

However, Nepal’s policymakers and political classes, whether by their own intention or compulsion, pay not much heed. Nepal expert late Leo Rose held the view that Chinese officials know that Nepal can stand on its own if it reduces its dependency.

“Nepal’s trade volume with China is increasing fast. Although Nepal is now facing deficit, there is an immense possibility to increase Nepal’s export to China,” said Rajesh Kazi Shrestha, president of Nepal Chamber of Commerce.

Although six decades have already passed, nothing has changed in the security and other dynamics of Nepal-China relations. Despite making a good progress in bilateral relations with India, China’s interest in Nepal has not gone down.

China had announced to provide Rs 77.70 billion in the International Conference on Nepal’s Reconstruction on June 25. As per this, grant aid projects would be run for the coming three years.

In the Joint Bilateral Meeting on Post Disaster Reconstruction Plan between the Chinese and Nepal Governments, China announced it is to immediately implement the reconstruction of the infrastructures damaged by the earthquake and to provide one billion rupees in financial assistance for the same.

The Nepali delegation in the meeting was led by Suman Prasad Sharma, Finance Secretary and the Chinese delegation by Zhang Xiangchen, Deputy China International Trade Representative, Ministry of Commerce, of the People’s Republic of China.

In the meeting, friendly discussions were held to implement China Grant Assistance Package Plan (2016-2018) for Nepal's post-earthquake reconstruction as announced by the Chinese Government during the International Conference on Nepal's Reconstruction (ICNR), 25 June 2015.

Both sides also reviewed China’s Emergency Relief Assistance to Nepal in the immediate aftermath of the devastating earthquake of 25 April and the existing bilateral Trade and Economic Cooperation between the two countries. Both sides agreed to give high priority for the implementation of the post-earthquake rehabilitation and reconstruction projects.

China has agreed to speed up works on projects such as development of settlements, reconstruction and providing other material support to the quake survivors in Sindhupalchok, expansion of the under-construction eight-lane Ring Road.

“China has agreed to immediately implement the grant assistance project as per Nepal’s priority and also to start at the soonest the remaining works on some projects after carrying out feasibility studies,” Secretary Sharma said.

China also agrees to provide grant for settlement development and safe housing construction projects in Kathmandu and Sindhupalchok which would be carried out on a trial basis. Schools and health centers would also be constructed in the earthquake-affected areas. China also agreed to provide cash assistance of US Dollars 10 million and handover new Medical Equipment to B. P. Memorial Cancer Hospital.

As Nepal –China celebrate sixty years of their bilateral relations, what has not changed either is geographical significance of Nepal in the broader security of China.

127 People Die In Stampede After Soccer Match In Indonesia By Agencies 3 days, 1 hour ago

Putin Declares Annexation Of 4 Territories Of Ukraine To Russia By Agencies 4 days, 1 hour ago