Kathmandu has earned a dubious distinction as 'maskmandu' and 'dustmandu' for its heavily populated and equally polluted capital city. It took several years for the air quality of the city to degrade to its current level 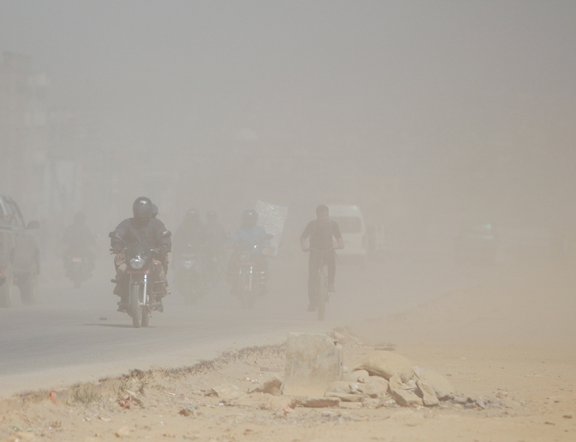 Kathmandu has earned a dubious distinction as 'maskmandu' and 'dustmandu' for its heavily populated and equally polluted capital city. It took several years for the air quality of the city to degrade to its current level. The effect of polluted air on human health is yet to be measured in terms of money, though. All this is the result of a wide gap between the commitment of the leadership and its implementation. Nepal realised the importance of 'clean air' years back. It has made several commitments to improve the air quality, but the ground situation is getting only worse.

In the last 45 years, Nepal shared her environmental issues and commitments with the international community regarding the air quality in the Kathmandu Valley. Nepal's National Report, prepared for the UN Conference on Human Environment in June 1972, explicitly mentioned 'motorised traffic' in Kathmandu, including these lines: "There is congestion in Kathmandu, with noise and some pollution from exhaust smoke but these are in the process of being solved by proper traffic facilities and regulations." The report also informed the international community that the (then) Ministry of Public Works and Transport is engaged on a Master Plan for Kathmandu Valley's physical development. On pollution control, the report further informed, "It is now the policy of the Department of Industry not to allow large environment pollution industries to be established in the Kathmandu Valley. … Stricter traffic regulations are now being codified to control motorised traffic."

After two decades, the 1992 National Report, prepared for the Rio Earth Summit, informed on the 'absence of data' and increasing trend of air pollution in Kathmandu Valley. In Kathmandu, the emission from the increasing number of vehicles, brick kilns and cement factories result in a thick layer of smog over the Valley throughout the year except during the monsoon. The problem persists because of limited air circulation in the bowl-shaped Valley. Though the direct correlation of increasing air pollution with deteriorating health has not been established due to lack of monitoring, the frequency of reported asthma cases indicates the influence of degraded air quality. Nepal commits to "develop a more comprehensive strategy based on minimum allowable standards of air …". This 20 years' realisation urges left the remaining 25 years (1992- 2017 period) for implementation.

Nepal's State of the Environment (SoE) report prepared for the first time using UN ESCAP format in 1983 mentioned the lack of records and works on air pollution but informed that 'rules and regulations related to vehicle gas emission is on process'. The 1993 SoE prepared in SACEP format also realised the problem of air pollution. The Ministry of Population and Environment, established on 22 September 1995, published SoE  officially on 5 June 1998 using pressure-state-impact-response (PSIR) framework. The SoE report has mentioned that total suspended particles (TSP), and particulate matter (PM10) in Kathmandu are above WHO guidelines: "On an average, winter days are more vulnerable than summer days based on amount of TSP in the Valley atmosphere."

Two decades back, quality of petrol and diesel due to low octane and high content of lead and carbon, poor vehicle maintenance, and high lead in the air were considered main causes. The 2000 SoE raised climate change issue by calculating the greenhouse gas (GHG) emissions from combustion of fossil fuels, deforestation and land use changes as sources.

With the aim of minimising the pollution load from vehicles, the Government introduced Nepal Vehicle Mass Emission Standards, 2056 (similar to Euro 1). The Government also banned the movement of diesel-operated three wheelers in Kathmandu, Pokhara Sub-Metropolitan City and Lumbini since mid-September 1999. Similar ban was imposed on the registration of two-stroke engine vehicles. On 19 February 2000, the Government prohibited movement of government, corporation and diplomatic mission-owned vehicles not complying with the prescribed standards, including prohibition of the use of 20-years old vehicles. The 2001 SoE reported increase in number of foggy days from 38/year in 1970 to 60/yr in 1994.

The 2003 Sustainable Development Agenda for Nepal (SDAN) further realised that concentration of airborne particulates are above WHO standards and health implications and has a broad goal of providing access to clean air. The SDAN objectives include 'setting strictly enforced ambient air quality standards'. The Government encouraged the shift towards 'zero-emission vehicles' … and promote research and monitoring of air quality ...

This review of Government published documents for nearly 3 decades confirms increasing degradation of air quality. Air quality of Kathmandu was compared with Mexico some two decades back. Tremendous increase on human population and vehicles has urged several times to take urgent actions. Politicians, decision-makers, technocrats, knowledge-based, pollution specialists, advocates or enablers including service providers and beneficiaries live in the Capital Kathmandu. However, air quality is degrading very fast. Who should take the responsibility for 'not doing work' or 'not complying with commitment'? Effectiveness of measures used to improve air quality would be understood after compliance.

It clearly demonstrates that Nepal is very active in preparing documents and making commitment with the assumption that it will not be 'translated into action'. All elites live in Kathmandu but air quality is becoming worse.

In the recent months, interaction programs on air quality and human health have encouraged to further recall what is required, what could/should be done and how it could be done? Who should be involved in 'cleaning the mess'? Kathmandu has already experienced that 'commitment could be easily translated into action'. One could recall success in front of us – widening of roads, cleaning of Bagmati River and providing 24-yours electricity supply. A small effort might bring a 'big change'. In a nutshell, solution exists; existing human resources could be mobilized; funding might not be an issue as pollution tax has not be spent; and mandated institutions should be made responsible to implement 'solutions'. What is required is 'action'.

Nepal Judiciary, Courts and Lawyers By Nishesh Dhungana 19 hours ago