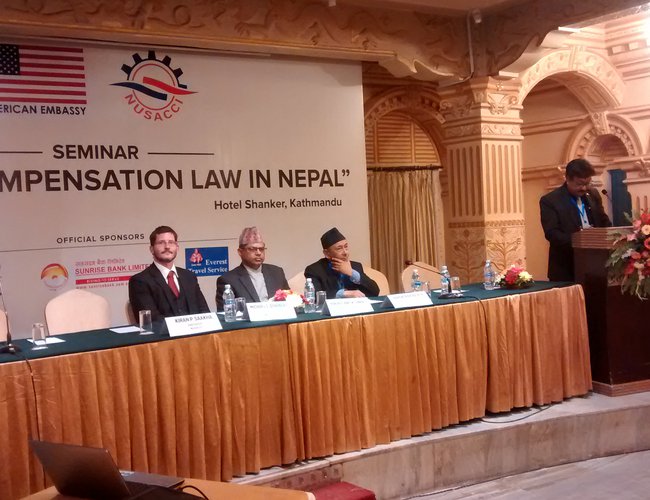 I’d like to congratulate the Nepal-USA Chamber of Commerce and Industry for organizing this workshop and for highlighting the need for a compensation law in Nepal. One of the United States’ top priorities is improving Nepal’s investment climate- a necessary step if Nepal is going to meet its goal of becoming a middle income country by 2030. Nepal’s economic development depends on attracting a significant amount of investment, both foreign and domestic. Attracting investment requires conducive environment for investors. Compensation law is part of that enabling environment. A compensation law that makes it easier for contacts to be enforced and disputes between businesses to be resolved is an important step in improving Nepal’s investment climate.

The relationship between the ability to enforce contracts and strong a business climate is hard to understate. According to the World Bank, contract enforcement is essential to economic development and sustained growth. Why contract enforcement so important? Companies want to minimize risk: countries that offer strong mechanisms for enforcing contracts and resolving commercial disputes in a predictable manner become much more attractive for investors. Unfortunately, Nepal does not currently offer such a mechanism, and that creates a barrier for investors and entrepreneurs. The 2018 World Bank Doing Business Reports ranks Nepal 153rd out of 190 countries for contract enforcement. Without a mechanism to enforce contracts, business have to rely more on personal or family contacts rather than take a risk on a new and potentially innovative firm that may or may not be able to deliver. Banks are also less likely to lend to new and unproven firms. And of course, without compensation law, private sector companies are shouldering tremendous amounts of risk, knowing they have no legal redress if a customer or supplier does not observe the terms of a contract.

It is also important to note that merely having a compensation law on the books is not sufficient. The law also has to be fully and fairly implemented- which requires a strong, well functioning, and independent judiciary. According to the World Bank, countries with strong judicial system that effectively enforces contracts generally have a higher level of economic development. In countries like Singapore, or New Zeeland, it generally takes less than a year to resolve contractual dispute, while in India and Bangladesh it takes nearly four years. When a dispute takes years to resolve, cost also increase. In several countries the cost of resolving a dispute in the judicial system often exceeds the value of the dispute, leaving business with no way to be fairly compensated.

Contract enforcement challenges are not unique to Nepal. In fact, many of Nepal’s neighbors fare even worse in the Doing Business Report- Sri Lanka are ranked 164, India is 165 and Bangladesh is 189 out of 190 ranked countries. This data highlights an opportunity for Nepal. If Nepal can improve its own Doing Business ranking, it will gain a strong and compelling competitive advantage in South Asia. A strong and fairly implemented compensation law would be a step this direction. If Nepal can create an environment where contracts can enforced and commercial disputes can be fairly resolved, companies will take notice and see that Nepal is a country where it might be easier to do business than in some neighbors countries, attracting new investors that might otherwise have gone elsewhere in South Asia.

And right now is the moment to act. For years, foreign companies have cited political instability and the inherent risk that accompanies frequent changes in government as a primary reason for not investing in Nepal. Now that Nepal has passed constitution and is forming a new government, one that will be in place for several years, now is the time to show that trade and investment can flourish in Nepal. Of course, it’s not enough to say that Nepal is open for business –these words have to be backed up by actions. Laws and regulations need to be enforced-fairly and consistently and new legislation, such as a compensation law, is needed. Beyond legislation, the government of Nepal also needs to articulate a clear vision for economic development, a vision that transcends party ideologies and that endures beyond the tenure of the current administration. I hope that vision will include an environment in which contracts can be fairly enforced.

This chamber and private sector at large, has a golden opportunity to help build the foundation for Nepal’s future economy, one that will help Nepal meet its goal of becoming a middle income nation by 2030. I know that the relationship between the Government of Nepal and the private sector has not always been an easy one, and I am certain that some of you have legitimate concerns about the new economic policies that might come out of the government. But this is also a time for new beginnings and optimism and hopefully an era defined by political stability.

I hope that this workshop will be the first step in eventually creating a compensation law that will help encourage foreign investment, promote Nepal’s private sector and its entrepreneurs, and help unleash innovation to create new jobs for Nepalis. We stand by, ready to assist you. The embassy has already provided input and feedback into the draft foreign investment bill and the Intellectual Property Rights policy that was approved last year. We would welcome the opportunity to provide feedback on what a compensation law might look like as well, to provide insights from other countries and markets that have proven successful.

Michael C.Gonzales  is a  charge d’ Affaires of US Embassy. Excerpts of the statement delivered at a Workshop organized by Nepal US Chamber of Commerce and the Embassy of United States of America on Need for Compensation Law in Nepal.

Michael C.Gonzales is a charge d’ Affaires of US Embassy. Excerpts of the statement delivered at a Workshop organized by Nepal US Chamber of Commerce Industry and the Embassy of United States of America on Need for Compensation Law in Nepal.

Nepal's Over Dependency And Sluggish Development By Hari Prasad Shrestha 8 hours, 58 minutes ago

Nepal Is Bearing The Disproportionate Burden Of Climate Change By BHARAT RAJ PAUDYAL 3 days, 13 hours ago