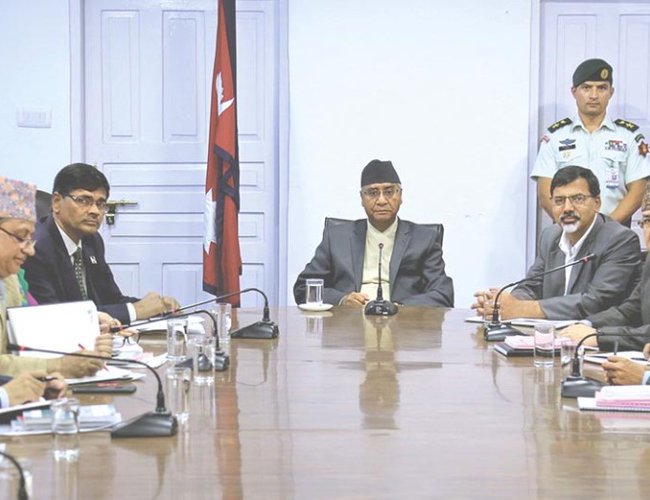 About a decade ago I remember reading a novel having a science background by the British Nobel Literature Prize winner Kazuo Ishiguro with the above title.   More recently, when our PM Sher Bahadur Deuba was not stepping down as PM, a respondent on Twitter tweeted, "I wish I get a boyfriend who will never let me go like the PM who is not letting go of the PM's chair."  The tragedy of this state of affairs is that in this interim period he is dispersing state funds to one and all as though it is all his own.

There have been plenty of comments in Nepali papers regarding the huge import bill that the country has to cope with annually.  In the bygone Panchayat days when a number of basic industries were built with Chinese or Russian aid, the country was self sufficient for some day to day consumption or use.    By the 1990s after the Jana Andolan I when the Nepali Congress (NC) returned to power, they had discarded their Socialists heritage saying that this was out of date.  Though the comradeship of the Nepali Congress to Socialist International (SI) remains, major departures of principle took place under Girija P Koirala's leadership. He set about and divested the country of these factories at 'peanut prices' to be most likely set up elsewhere outside the country.  Willy Brandt, a friend of BP and sponsor of Nepal as a member of SI must be turning in his grave.  It is interesting to note that the same NC has now had a change in heart and advocated restarting some of these 'shut down' industries, e.g. Nepal Drug.

In the course of the last twenty-five years the Nepali workers in distant lands have sent back remittances in hard currency which are being used for the luxurious needs of the 'stay at homes' in Nepal.  One recalls that Nepal's trade in the past was mostly with Tibet in the North and India in the South.  The ushering in of democracy in 2007 BS led to the signing of a Treaty of Friendship with India which was however very unequal from Nepal's point of view.  This was pointed out by the Nepal Communist Party soon after the signing and re-stated by Man Mohan Adhikari in 2051 BS.  Then came the creation of SAARC and we were told that trade would be regularised in a much beneficial manner to all partners.  Well the fact is that it hasn't occurred so far.  One has only to think of the hassles that Nepali traders have to face trying to get some of our natural products to India.  About a month back the ginger export from Nepal to India was stopped at the border stating that this was as per a decision from the Indian government.  Sushma Swaraj's goodwill visit is said to have temporarily rectified this.  Such actions recur -- sometimes it is suparis and sometimes lentils on some pretext.  Nepali books and news used to be held up at the border.  But it is not only goods. Even poor hardworking Nepalis returning back to Nepal used to be harassed at the border and made to surrender part of their earnings.  A good development by the banking sector is now the ability to transmit the money rather than to carry it.  This has resulted in a substantial amount of money coming to Nepal as remittance from India too.

It is perhaps these factors which prompted Nepal to attempt doing business with other countries.  Our quest for items of better standard from places further afield e.g. Malaysia, Indonesia & Singapore led to these being now on our supermarket shelves. Our demands for quality have reached greater levels and as a result goods manufactured in Nepal are not being bought.  What the local Nepali consumer has overlooked is that we, within the country are enjoying the luxuries because of the labour of our national compatriots in distant lands.  There is an Eminent Personages group of Indians & Nepalis who have met six times in the past and are due to meet in Kathmandu next.  It has been accepted that our Treaty needs to be revised.  This bottle neck inherited from the past been a strangle hold to development in our country.

A weekly periodical has listed our external trade as 65% with India, 12% with China and 25% with the rest of the world.  With the development of the One Belt One Road policy of China which Nepal supports, one can expect that our trade with our Northern neighbour will increase further in the future.  The 'Made in China' clothes, electric and electronic appliances are popular and widely used in Nepal.  The development of the Nepali music and the film industry is due to affordable quality equipment from China. If one goes to branches of a popular departmental store in Kathmandu one is amazed to find that even the sarees plus the images of Hindu Gods and Goddesses are also manufactured in China.  A more recent trend is in the hospitality sector for one is encountering Chinese owned restaurants in both Pokhara and Kathmandu these days.  Following the Indian blockage of 2015 our relationship with our China Northern neighbour has progressed rapidly.  The new road to Rasuwagadhi and on to Kerung is on schedule and will further our trade relationship.

Is it the political leaders of Nepal who have brought all this about?  If one looks around one finds that most of them have their children in distant lands and are not likely to return to Nepal, though they may end up as NRNs in future years.  The recent election results show that many of our current leaders have been rejected by the Nepali citizens.  Hopefully the next elections in five years time will make matters still better.

Oxford Vaccine Will Be Available In India Very Soon: Serum Institute Of India (SII) By Agencies 1 day, 15 hours ago