The first semi-final of 2018 World Cup will see Belgium, who will be looking to enter their first ever World Cup final, facing off against former champions France at the St Petersburg Stadium. 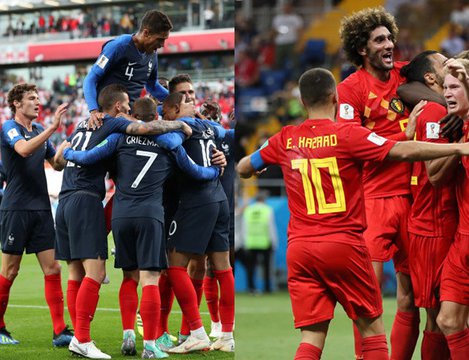 The first semi-final of 2018 World Cup will see Belgium, who will be looking to enter their first ever World Cup final, facing off against former champions France at the St Petersburg Stadium.

Road to the semi-final

France started off their World Cup campaign in unimpressive fashion as they toiled to win 2-1 against Australia, while a Kylian Mbappe goal saved the blushes for Les Bleus against Peru as they won 1-0 and a boring goalless 0-0 draw against Denmark secured their entry into the Round of 16. The knockout fixtures saw glimpses of how good France can be as they demolished Argentina 4-3 with Mbappe scoring twice. The quarter-finals saw France back to their group stage form as they won 2-0 against Uruguay.

Belgium started off their World Cup campaign in a comprehensive fashion as they thrashed debutants Panama 3-0 in the opening match while they dismantled Tunisia 5-2 in the second group stage match. The third match saw Belgium beating England 1-0 in a very boring match helping secure the first spot in Group G.

The Round of 16 saw the Red Devils pitted against Japan, in one of the matches of the tournament where Belgium came back from 2-0 down to win 3-2 in the last minute of injury time.

The quarter-finals saw Belgium facing off against five-time champions Brazil in the best match of the tournament so far as Belgium defeated Brazil 2-1, helping them qualify to only their second ever World Cup semi-final appearance.

For France, Blaise Matuidi is expected to replace Corentin Tolisso after serving his suspension. Meanwhile, right wing-back Thomas Meunier is suspended for Belgium after picking another yellow card.

France has won all the three of the previous meetings at major tournaments, including two World Cup encounters against Belgium. However, Belgium are unbeaten in the last three friendly games against France.

This will be the 74th match between the sides with Belgium winning 30 times while France have won 24 times with 19 draws.

Belgium's haul of 14 goals from their first five World Cup games is only bettered by Brazil in 2002.

Kylian Mbappe, just 19, has been the most dynamic player in the tournament, and Belgium's defenders have struggled at times.

WHY BELGIUM WILL WIN

Romelu Lukaku, Eden Hazard and Kevin De Bruyne are a more potent offensive trio than any other France has faced.

MAN IN THE MIDDLE

Andres Cunha of Uruguay was assigned to referee the match after working France's opening 2-1 win over Australia and Spain's 1-0 victory over Iran in the group stage. He awarded France a penalty kick in the game against Australia after a video review of a tackle from behind by Joshua Risdon on Antoine Griezmann, who converted for a 1-0 lead. Cunha disallowed a goal by Iran's Saeid Ezatolahi after an assistant referee and the video assistant signaled the player was offside.

Belgium has reached the semifinals for the second time. The Red Devils lost to Argentina 2-0 in 1986 in Mexico as Diego Maradona scored two goals.

France has won 24 of 73 meetings since 1904, Belgium has won 30 and there have been 19 draws. Of 11 competitive matches, Les Bleus have won five, lost three and drawn three. France routed Belgium 5-0 at Nantes in the group stage of the 1984 European Championship as Michel Platini scored a hat trick, then won 4-2 in the third-place game of the 1986 World Cup. Emile Veinante scored in the first minute of France's 3-1 win in Paris in the round of 16 at the 1938 World Cup.

Belgium: "I hope everybody in Belgium realized that this generation is special, and everything they did is to make them extremely proud." - coach Roberto Martinez.

France: "We're not scared of anyone. We've been confident from the start and we're not asking any questions of ourselves." - right back Bejamin Pavard.