Civilizations and their values are certainly encountering one another, some violently and others in a more accommodating manner. This Dussain is a good time to reflect, in between inevitable gastronomic stupors, on this globally pervasive fact as well as the confused state of the Old World Order so that we can chart our own courses to a better future. May Durga Bhawani enlighten us all. 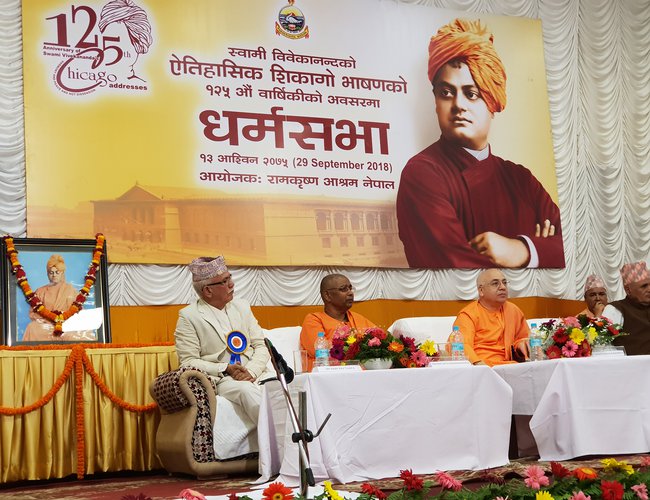 The idea of civilizations as units of study gained vogue when the political scientist Samuel Huntington, surveying the global landscape in 1992 just after the collapse of the Berlin Wall and the Soviet Union with it, strove to caution an overconfident American elite wallowing in victory that it was not the "end of history" as his former student Francis Fukuyama has hastily predicted in 1989. Fukuyama and the Western elites believed that the political basis of all strife had ended, that free-market neo-liberal democracy and its appurtenant institutions of banking, insurance, human rights and the like – including the "Washington Consensus" with its MDGs and SDGs as far as the Developing World was concerned – would be the new world order that would live happily for ever after. Huntington feared that cultural identity, expressed in the concept of a civilization, would be the new fault lines of future political clashes; and looking back a quarter of a century later he certainly seems to have been surprisingly counter-intuitive and prescient.

What first shook the confidence of the Western world out of its Fukuyamian hubris was 9/11, the audacious and highly "creative" attack on symbols of American power by a group of Western-educated Saudi Islamists on 11th September 2001. The idea of self-sacrifice by young men for a cause they believed in is as old as history; but this daring attack was done against the fortress of Western power by acolytes of an American protégé, Osama bin Laden who had been trained to fight another "evil empire", the Soviet communists in Afghanistan. The script was not supposed to have played out this way, as Fukuyama and the Western elites believed deeply.

And then the financial collapse of 2008 happened as the junk bond bubble of financial scams rocked the New York-London- Frankfurt fortresses of neo-liberal capitalism even as Shanghai, Dubai, Mumbai and others showed signs of far better social resilience. Indeed, the growing military and political clout of China and Russia with the alternative financial model espoused by the BRICS and Shanghai groupings is demonstrating that a multi-polar world is in the making, not quite in the manner as Huntington had warned with his "Clash of Civilizations" thesis (Huntington was mostly positing his arguments as Islam versus the West, with Russian Orthodox, Sinic and Indic civilizations as "swing civilizations" that could side with the West. Recent actions of Modi, Putin and Xi Jinping do not seem to indicate that swing towards the West, nor towards the Syraic now divided into Iranian and Arabic sub-civilizations, the former rigidly anti-West and the latter, especially the Saudis almost an appendage of the Western banking system.

This Islamic cleavage – with Turks thrown in as the swing Ottomans – forces us to go back to another more comprehensive scholar, Arnold Toynbee. His 12-volume A Study of History is a much-ignored masterpiece that show how civilizations are born, grow and suffer breakdowns, in the process reacting to both internal and external challenges. In Toynbee's view, civilizations breakdown not so much from environmental causes or attacks from without as from their own elites who lose their ability to inspire their "internal proletariat" and rely on coercive power: they become not a creative minority but a dominant one at perpetual war with their own kind. Trump, Brexit and the rise of right-wing "saviours" in much of Europe from Scandinavia through Germany and France down to Western allies such as Egypt's Sisi, Israel's Netanyahu and Saudi bin Salman certainly prove Toynbee right, and Huntington could certainly glean a few important insights from him.

What should concern us here in the Indic world – and unlike Huntington, Toynbee includes under this grouping much of the Buddhist world as well – is another thesis of Toynbee: encounters between civilizations. They can be violent such as is happening now between Islam and the West, or they can be assimilative leading to new rounds of creativity such as seems to be happening in the encounters of Sinic and Indic civilizations with the West. Even with these two there are clear differences: the Sinic has a deeper strain of competitiveness – and inciting Western militarism – while the Indic is showing greater assimilative tendencies, much as the Sinic world showed with Buddhism a millennium earlier. Two examples of this assimilative Indic approach are worth reflecting over.

The first is Sikhism which is the result of the older Indic society reacting to its encounter with the Islamic/Syraic civilization around the 15th century. Anyone studying its practices and visiting Amritsar can be struck by the similarities with Islamic practices: a holy book and its revering and reciting, circum-perambulation of the temple much as with Mecca, ablution rituals, and most important, the idea of the "brotherhood of man" that threw away much the debilitating social practices of rigid hierarchism such as casteism that shackled Indic society. These not only allowed Indic faithful to shed useless karmakanda and return spiritual practices to more Vedantist depth and catholicity: they also gave new vigour to their society but through its new-found collective militancy, Sikhism also arrested the spread of Islam through forcible conversion within the rest of the Indic society.

The other example is Hindu renaissance following the Indic society's encounter with the West, which while prolonged is often traced to Robert Clive and his defeat of the ruling sultan of Bengal at the battle of Plassey in 1757AD. A century later, the British Raj had spread all of South Asia and over Myanmar as well, and almost exactly a century later, in 1863 was born in Calcutta Narendra Nath Datta, later famous as Swami Vivekananda. His 150th birth anniversary fell five years ago, and on that occasion the Ramakrishna Mission in Kathmandu had organized a celebration where this author delivered a talk on Swamiji's mission of renaissance and its significance. Some two weeks ago, on 29th September this year, the Ramakrishna Mission again organized another celebration – the 125th Anniversary of Swami Vivekananda's address at the Chicago World Parliament of Religions on, strangely 11th September 1893. It was also a 9/11 event that continues to have an impact both on the West and the East; but it is not permeated with any coercive militarism unlike civilizational encounter of 9/11 of 2001 between Islam and the West that has mired the America and its NATO allies in Afghanistan and Iraq in the longest and most fruitless war of recent times. The assassination of Osama bin Laden was the West's demonstration of its superior militaristic technological creativity and a reply to the Islamists, which, however, lacks the moral high-ground self-sacrifice of the 9/11 hijackers.

Swami Vivekananda is remembered for his forceful reform and re-interpretation of Hinduism in light of Vedanta philosophy; and, unlike traditional Hindu philosophical schools, did not negate society or other religions. The Ramakrishna Mission he founded – much like the Jesuit and other Christian orders that came to Calcutta with the East India Company and founded hospitals and schools along with their proselytization – has as its motto (new for Indic society) aatmano mokshyartha jagat hitaya: that it was not enough to pursue personal spiritual liberation alone and that one had to uplift one’s society in parallel as well. The difference, however, with similar missions of Abrahamic religions, was his (and his Guru Sri Ramakrishna's) strong argument that Hinduism does not believe in tolerance which is a rather patronizing way of saying, "I know you are completely wrong in your religious views but I will tolerate you as one tolerates an ignorant person". Instead, Hinduism believes in acceptance, that ALL religions are true at their core, that a spiritual aspirant must dive deep within the best of religious values he is born into until (s)she realizes the universal ultimate truth. Vivekananda' another famous saying on this is that it is good to be born into a religion but bad to die within it, meaning one had to go beyond the everyday mundane aspects of it through work, worship, experimental search and philosophical enquiries to reach higher ends.

Civilizations and their values are certainly encountering one another, some violently and others in a more accommodating manner. This Dussain is a good time to reflect, in between inevitable gastronomic stupors, on this globally pervasive fact as well as the confused state of the Old World Order so that we can chart our own courses to a better future. May Durga Bhawani enlighten us all.

Here’s How Governments Can Reduce The Impacts Of Asia’s Devastating Flash Floods By Rabindra P. Osti 5 days, 2 hours ago

Make In Nepal By Hemang Dixit 6 days, 11 hours ago