Yesterday, i.e. November 11, the world celebrated the hundredth year of the World War I armistices signed between Germany and allied countries. .... 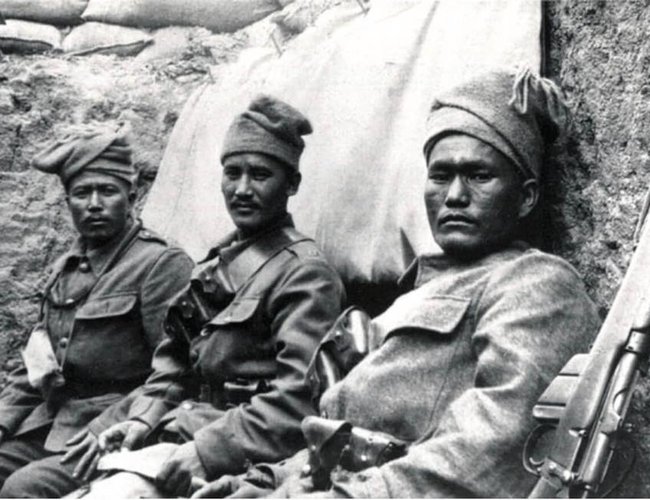 The outbreak of First World War in 1914 gave Chandra Shumshere an opportunity to offer Britain “We shall be proud if we can be of any service, however little that may be.” At that time in 1914 Imperial British India's 10 Gurkha Regiments with two Battalions each had about 19,000 Gurkhas. “However little that may be” gave Britain the opportunity to raise another Regiment to make it 11 each with three Battalions. With cannons, machine-guns and trench warfare decimating soldiers on the Western Front like rats, the strength ballooned to 59,000 Gurkhas by 1919. When the Great War ended, Chandra Shumshere had dispatched over 200,000 young men to be cannon fodders of German and Ottoman Turks. For a tiny nation with a 1911 census population of only 5.6 million, this meant 3.6% and the 1920 census consequently indicated a decrease of 1.2%. By 1922 Imperial British India scaled this strength back to 19,000 through massive demobilization with little remunerations. Many failed to return to their homes in Nepal and many who did were disabled, disfigured, maimed and scarred by fighting somebody's war.

Neither Chandra Shumshere nor British India did anything to rehabilitate these badly scarred soldiers as Chandra had something grand up his mind: he wanted to replicate his uncle, Jang Bahadur, who by providing military services during the 1857 Sepoy Mutiny had the 1816 Sagauli Treaty ceded territories of Naya Muluk (Kailali, Kanchanpur, Banke and Bardiya) returned back to Nepal. In fact, discussions were indeed held between the Government of India and Nepal on "…..cessation of Semeysur range from the boundary pillar to the Great Gandak river. This move, in fact, consisted of moving the boundary pillar to Champaran which constituted the possessions of the Rajah of Bettiah and Ram Nagar.' However, Lord Chelmsford in August 1920 wrote to Maharaja Chandra "… clearly impossible that reward should take the form of restoration of territory previously ceded and the Government of India are therefore offering monetary present as the best available substitute in the circumstances." Thus resulted that infamous "blood money" offer of the annual present of 10,00,000 rupees in perpetuity for Nepal's services (death, maimed and missing of over 24,000 Gurkhas). Disappointed with not being able to recover the ceded Semeysur-Gandak territories, the shrewd Chandra did succeed in having the Treaty of Friendship signed with Britain in 1923. This treaty gave the "unequivocal" British recognition of Nepal's independence. That is why Dr. Harkha Bahadur Gurung stressed that the 1923 Treaty of Friendship is the fruit of the services rendered by the 200,000 Gurkha soldiers during the First World War. And no one can deny this fact.

Yet to mark the centenary of the end of First World War in Paris on 11th November 2018, while 70 Heads of State (including those of warring parties Germany and Turkey) were present, Nepal preferred to remain conspicuously absent. Ashamed of the sacrifices made by 200,000 of her sons, the Nepal government even refused to celebrate the centenary day. Across the border, Republic India’s Prime Minister Modi, celebrating the occasion with a Scottish piper playing at the Delhi War Cemetery decked with marigold flowers, tweeted “our soldiers fought world over, just for the cause of peace.” India is not ashamed to have contributed 1.3 million soldiers to the Great War from where 74,000 never returned. It is possible that this figure could include Nepal’s contribution as the Gurkhas were but a part of the British India Army. Winston Churchill once said, "A nation that forgets its past has no future." Is that the direction where we are exactly heading for?

Yesterday, i.e. November 11, the world celebrated hundredth year of the World War I armistices signed between Germany and allied countries. Leaders of many countries, including President Trump had gathered in France to commemorate the day. In Kathmandu, the British Council celebrated the day by organizing a public show of a famous picture by Peter Jackson on the war fought by a particular regiment in the European front, I guess in France. 95 + years old World War II veteran Major Trilok Singh Chhetri, his son Naresh and two of us- Santa Bahadur Pun, a former officer on special duty at the ministry of water resources, government of Nepal and I - were at the council auditorium to watch the movie. Among the audience, to our surprise, we found a large number of white people compared to the Nepali audience. Furthermore, it is really surprising to note that the allied powers seemed to have forgotten the death of 20 000 Nepali soldiers who fought for their cause and lost their lives in the World War I. Likewise the government of Nepal also did not bother to remember the sacrifice made by sons of the soil for a cause. Santa and I talked about this matter. He became really emotional to this issue and has send me the following write up to be posted in my fb. Hope our fb friends would appreciate his concern to a matter, for which Nepal government should have been serious and organized some programs to remember those fallen fellow countrymen during the war of 1914 -1918.

Pun is former MD of NEA