As the temperature decreased to -3°C, the room was freezing with an icy wind blowing from the two sides of the windows 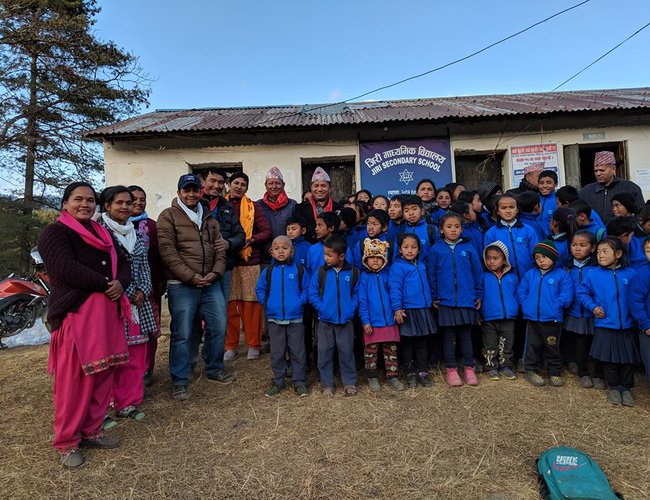 As winter approaches, the snow has started falling and the mercury is down to minus at Jiri, 190 kilometers east of Kathmandu; on January 8, six-year-old Sushant Tamang had no other option than to leave his home to attend school without warm clothes. Although the weather was freezing, Tamang and his classmates, all residents of Jiri Municipality, spent the entire day without winter clothes. Destroyed by the earthquake in 2015, the primary school children of Jiri Secondary School, a public school of ward no. 4 of Jiri Municipality, have been attending the classes in temporary buildings constructed of zinc sheets. As the temperature decreased to -3°C, the room was freezing with an icy wind blowing from the two sides of the windows. However, for students like Tamang, who come from the villages and are too poor to go elsewhere, they have no option but to stay.

For impoverished children, there is no one to feel their plight and provide some kind of warm clothes. Having a very limited budget for social welfare, the school administration and municipality were merely silent spectators to the predicament of the children. 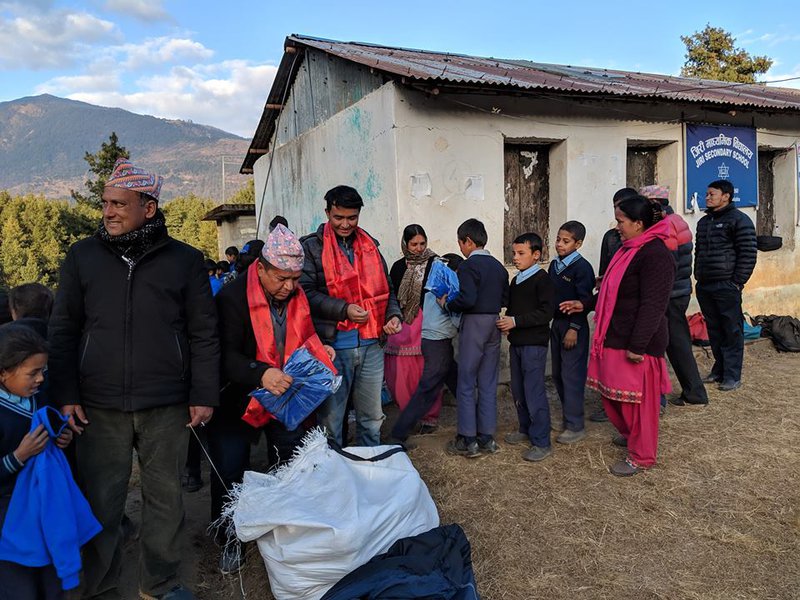 Jiri Municipality has knocked on the doors of several organizations requesting for winter clothes for the children but no one responded. Until the Lutheran World Federation Nepal (LWF-Nepal) and Evangelical Lutheran Churches in America (ELCA) saw the bleak situation of the young children from marginalized and Dalit communities, answering the pleas for help and immediately agreed to provide 500 winter jackets to primary level school children through Jiri Municipality.

As the prolonged winter season has just begun, the Mayor of Jiri Municipality, Tanka Jirel, and the deputy mayor, Krishna Maya Budhathoki, distributed 500 jackets to primary and pre-school level students on January 8, 2019 at the school premises. In the presence of the Chairperson of Ward 4 of Municipality, Gopal Bahadur Karki, the headmaster of Jiri Secondary School, Gopal Bahadur Karki, teachers, leaders of political parties and a Representative of LWF-Nepal, Ashwini Poudel, the Mayor and Deputy Mayor handed out blue-coloured winter jackets to each primary school child. All the children present picked up the blue jackets with a smile knowing that they will feel secure in the next day of class with their new warm clothes.

Along with Tamang, all the other children expressed rejoice. “I feel much warmer now,” said Ausha Khati, 6, a young girl from the Dalit community, who wore the warm jacket over her sweater. Sushant Tamang came with just a shirt in the cold temperature but now he looked much confident in warm clothes. All the other children displayed similar reactions. 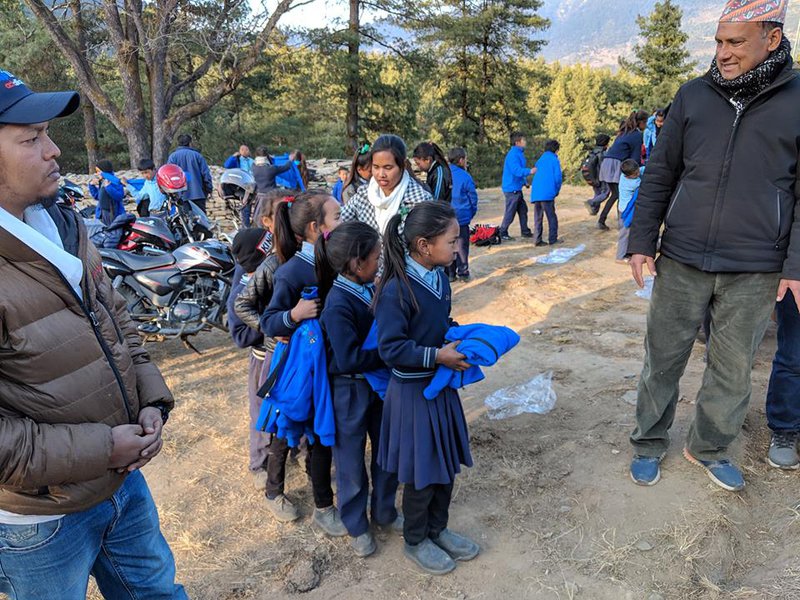 “The warm jackets provided by LWF-Nepal and ELCA help children of poor and marginalized communities to cope through the winter. This is a solid contribution to the children of disadvantaged communities living in the municipality,” said Mayor Jirel. “At a time when there is limited internal revenue generation and the annual grant of central and provincial governments is spent on other sectors, there is virtually no budget for social welfare. The municipality is very much obliged to LWF-Nepal and ELCA for their kind support.”

Situated in the eastern part of Dolkha District, poverty is highly prevalent in the rural parts of Jiri Municipality. As one of the largest and most reputable community schools, the students of Jiri Secondary School come from more elevated regions or live one to one and half hours walking distance away from school.

“We have a large number of primary level students who walk at least one to one and half hours from their homes. As the temperature declines, then comes the snow and frost,” said headmaster Karki. “Because the school building is now under construction, the students have to wait another two to three years to have a new school room with proper windows.” 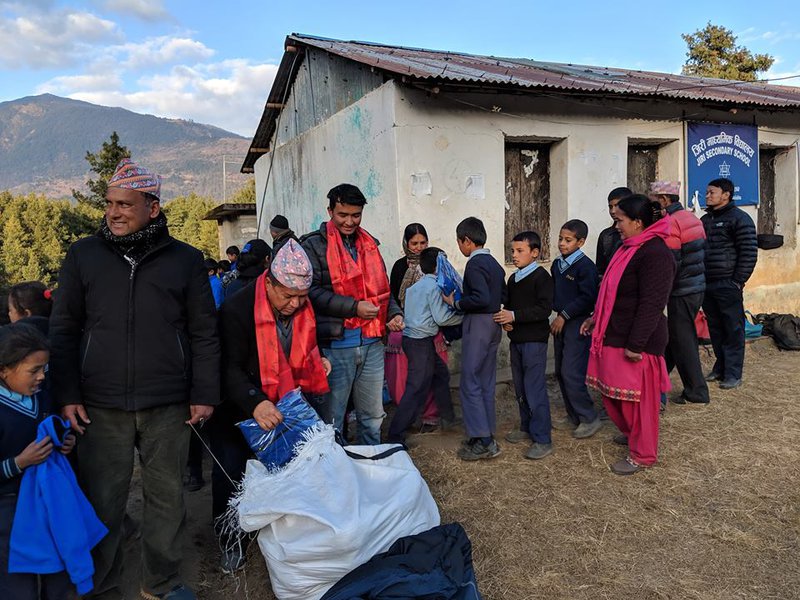 Since Jiri Secondary School is a government school with free education, an overwhelming number of primary level students come from Dalit and other marginalized families living off an average monthly income of Rs.3500.00 (USD 30).

Having 645 students at primary and pre-school level, Jiri Secondary School is the largest school of Jiri Municipality. “In fact, ours is a school of poor and working-class children,” said Karki. With a big chunk of money being spent on food, purchasing warm clothes is a low priority.

"Through LWF-Nepal and ELCA’s winter support of providing warm jackets to pre-school and primary level students, the children from marginalized communities have not only been able to continue their studies more efficiently but they have also saved their lives.

Although the amount and volume of the support is small, these jackets have supported the children to cope with the cold. One of the major highlights of this contribution is that it involved all the major stake holders: humanitarian organizations like LWF-Nepal and ELCA, Jiri Municipality and elected representatives, school administration and political parties joining hands together for the cause of compassion.

“We all have the same mission, to serve society. This is a good example to show how we can work together. Jiri Municipality wants to collaborate with LWF-Nepal and ELCA in future for the benefit of Dalits and other marginalized communities of Jiri Municipality,” said deputy Mayor, Krishna Maya Budhathoki.

Dr. Prabin Manandhar, Country Director of LWF Nepal says, “We are extremely delighted to be able to respond to the urgent winterization needs of the children with dignity in partnership with the Jiri Municipality with support from ELCA”.

GG: Growing Local Reach By A Correspondent 3 weeks, 2 days ago

WVIN Working For Change By A Correspondent 11 months ago

A Search For Genderless Talent By Susmita Aryal 11 months, 2 weeks ago

Women In Leadership By Aagya Pokharel 12 months ago

IUDP A Game Changer By Keshab Poudel 1 year, 3 months ago