Fish Species Are Under A Threat In Nepali Rivers: ADB Report

Fish Species Are Under A Threat In Nepali Rivers: ADB Report 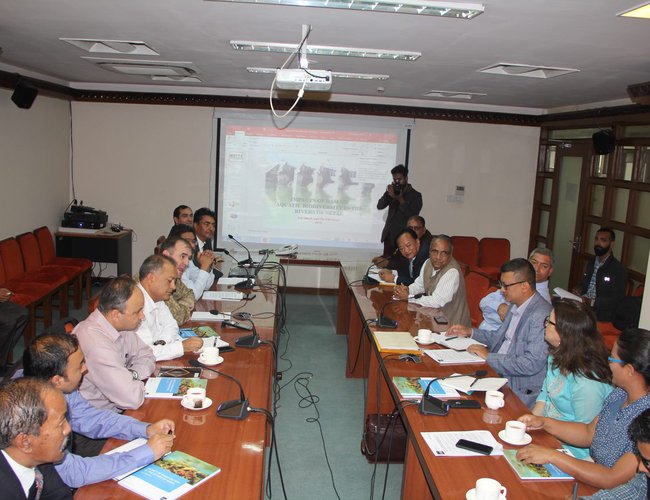 ADB’s Country Director for Nepal Mukhtor Khamudkhanov expressed the hope that a study report on impact of dams and fish in the rivers of Nepal will open the door for more discussion and extensive research on this important topic.

Adresssing a dissimination seminar of a study Impact of Dams on Fish in the Rivers of Nepal ADB's Country Dirctor Mukhtor Khamudkhano said that the study will contribute to save endangered species of the Himalayan rivers.

“A broader understanding of the importance of a healthy fish habitat to maintaining balance in the ecosystem and food chain and generating economic and social benefits from fisheries will go a long way in promoting environmentally sustainable development,” said Mukhtor Khamudkhanov, ADB’s Country Director for Nepal.

Special measures are needed in hydro and irrigation projects in Nepal to arrest rapidly declining fish stocks in the country’s rivers, according to a new study from the Asian Development Bank (ADB).

The new study from the Asian Development Bank (ADB) assessed the impact of projects including the construction of dams on aquatic biodiversity and came up with several recommendations to save fish population in the rivers of Nepal.

“Early findings of this study suggest that the fish population in Nepal’s river basins with dams are in sharp decline,” said Deepak Bahadur Singh, ADB’s Senior Environment Officer and co-author of the study The Impact of Dams on Fish in the Rivers of Nepal. “Some technical considerations while building dams or other such projects can go a long way in saving the fish population. Providing a fish ladder, building a fish passage, and a fish bypass channel, are some examples.”

In addition, breeding fish in hatcheries and annually releasing them upstream and downstream of the dam to maintain their populations could also be effective, says the study. The study also recommends a “fish screening framework” for identifying the scale of impact on fish by a development project and adopting typical mitigation measures

The study assessed the operation of selected hydropower and irrigation systems with dams to divert water. The systems included the Kali Gandaki, Marshyangdi, Middle Marshyangdi, Kulekhani, Khimti, and Trishuli hydropower projects, and the Babai irrigation project. The study also reviewed international good practices, particularly in South Asia, on mitigating the impacts on fish while constructing projects with dams on rivers.

The study suggests that effective regional cooperation between Bangladesh, India, and Nepal could help conserve the valuable and threatened aquatic fauna by ensuring the animals’ transboundary movements for feeding and reproduction. A few tributaries in each major river basin could also be declared aquatic life protection areas, or even a fisheries national park.

The study concludes that a strong legal provision and a dedicated government agency to enforce the rules and regulations are crucial in protecting fish habitat in the country.

Along with biodirversity, Nepal is also known for its diversity in fishes. Acting Executive Director of Nepal Agriculture Research Center Dr. Tek Bahadur Gurung said the report prepared by ADB's team is highly important and worthy to reise the awarness about importance of acquatic animals for preserve the river environment.

He thanked author duo Deepak Bahadur Singh and Deep Bahadur Swar for brining a very detailed report on the fisheries in Nepal and the damaged caused by the construction of hydropowe and irrigation dam.

As the riveers of Nepal are a significant habitat of many resident and short to long-distance migratory fish species, dams create barriers that restrict movment and many cases thraten species surviaval.

According to the study, IUCN Red List for fish and fauna in Nepal includes 21 rare and endangered fish species. At a time when Nepal has been in the process of buildign more hydropower projects by public and private sector, these endagered species will extinct if serious proper safeguards meansurements are not considererd for fish during the construction of dams.

The study was jointly authored by Singh and Deep Bahadur Swar, Senior Fisheries Expert. ADB is committed to achieving a prosperous, inclusive, resilient, and sustainable Asia and the Pacific, while sustaining its efforts to eradicate extreme poverty.

As ADB is leading multilateral development partners of energy sector, the commitment shown by the bank will help to draw a balance development between fishes species and hydropower project.

The Response To COVID-19 Should Also Be A Response To The Climate Crisis By Preety Bhandari, Arghya Sinha Roy 1 month, 1 week ago