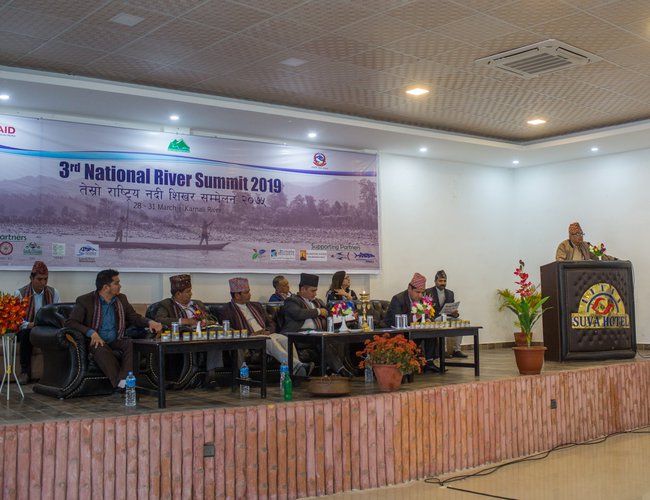 How wrong were Nepal's social and environmental activists – to think that the development debate had ended in the mid-1990s with the successful battle against Arun-3. Here was a good, natural hydro development site ruined by bad donor project economics, and where neither Nepal's politicians nor the foreign development community seem to have learnt any lessons (see: http://www.water-alternatives.org/index.php/alldoc/articles/vol6/v6issue2/207-a6-2-4/file). Now, a quarter of a century later, a new generation is having to fight that battle all over again.

This déjà vustate of play was on vivid display at the 3rd National River Summit at Rakam, Aathbisa, Karnali at the end of March. It was a gathering of over 200 river activists and their national and international friends, led by the redoubtable river runner Megh Ale and his Nepal River Conservation Trust. The rift that came to the fore was on how the so-far undeveloped and rather pristine Karnali river was to be exploited for economic gains, mainly of the Karnali region. The dominant view that prevailed – since this was after all a Summit organized by conservationists – was that values such as whitewater rafting, fishing as well as the Kailash-Karnali sacred river route should be preserved and sensitively developed so as not to foreclose other types of development possibilities. The opposite view asked for rampant hydropower development that would funnel much of Karnali into tunnels leaving behind dry and desolate water courses as the primary route to prosperity. It was championed by almost all local and provincial politicians, many of whom also happened to be contractors and owners of bulldozers and excavators. The view that there are alternative and more sane development pathwayswas anathema to this excavator-loving crowd.

The Karnali Declaration 2019 passed by the Summit did bring out for public debate some of those alternative views ignored by the dominant nexus of contractor-politicians, hanged be their socialist or communist pretensions. Foremost among them was the need to recognize the river's value for tourism (rafting, kayaking), protecting fishing for local marginalized communities by banning commercial, often outsourced fishing practices such as blasting and pesticide-poisoning, as well as spiritual and aesthetic needs of Hindu-Buddhist communities for whom Kailash-Mansarovar as well as tirthas along the way are sacred. This valley is the most natural route to Mt Kailash which is already seeing a huge influx of pilgrims, especially from South India and which has led to a boom in income for hotel owners and the local economy from Nepalganj to Hilsa. It also recognizes that floods, slated to increase in intensity and frequency due to climate change, harm settlements especially in the floodplains, to protect against which it advocates measures for protection other than costly but ineffective taar-jaali bundling embankments.

The Summit also gave voice to the most voiceless of Nepal's riverine communities, the Majhis and Rajis who used to eke out a living transporting people across in dugout canoes, doing subsistence fishing and also panning for gold. Their livelihoods have been devastated by normal development of bridge building and river diversion for hydropower – all much-needed projects, no doubt – without providing alternative means of livelihood. While Nepal's hydrocracy loves to celebrate with official pomp the International Water Day on March 22 with programs in Kathmandu and forgets about burning local water issues for the rest of the year, the Majhi representative at the Summitmentioned the third Tuesday of the month of Falgun (often falling in early March) when this community literally worships the river that gives them sustenance. It seems the local gaonpalikas of Kamalamai, Barahakshetra and Manthali have already recognized this as a local holiday. The Summit asked that such traditional festivals, including Sithi Nakha in Kathmandu Valley (on 8th June this year), Chhat in eastern Tarai after Tihar in the autumn, the Muhan Puja of Karnali before its brushwood dam diversion in early spring by the Tharus of Rajapur together with other unappreciated water festivals of Nepal's many ethnic groups be recognized as Nepal's actual and real Water Days.

The most important rift was seen with the Upper Karnali hydropower project, granted illegitimatelyby the 2006 Loktantricksters to an Indianprivate companyby violating constitutional provisions, not to produce electricity for Nepal or the Karnali province but for exportto Mughlan. Southern activists do not go by the "No Dams!" slogan of Northern activists: they argue for "No Bad Dams!", leaving themselves the political space to support good ones proposed by their antagonists even while opposing bad ones. So it was in the case of Upper Karnali, seen popularly as a neo-colonial, anti-Nepal type of development where Nepal gets little benefit but bears all the costs (see: https://www.spotlightnepal.com/2016/06/02/upper-karnalis-highway-to-serfdom/). While the Indian developer shows no capacity or intent to develop it as per agreement – it has already defaulted multiple times, and has reportedly "sold" its license for the 600MW Upper Marsyangdi-2 to a Chinese company for three billion rupees – local politicians still think it is going to bring them "development". They fail to recognize that such a fate might also befall Upper Karnali, which the developer in dire financial circumstances will use to pay off its debts. That wholly unnecessary price will ultimately have to be paid by the Nepali consumers. The Summit Declaration describes such developments as ku-bikas (mal-development) and not su-bikas (or apt-development).

Indeed, one of the significant items in the Declaration mentions that some 6000 MW of potential hydropower development is possible in the tributaries of Karnali, which is more than sufficient not only for the needs of Karnali province but also for that of Nepal for the foreseeable future. Thus, there is no need to dam the mainstream of the Karnali right away: it is much wiser to leave it free-flowing for the time being and leave the decision on damming the mainstream to the future generation of Nepalis to take when and if they feel that might be necessary. The argument is similar to that which currently roils the Mekong in the debate about damming the mainstream. This author was a member of the Mekong River Commission's panel of experts reviewing its basin development plan. What emerged was that damming the mainstream would irreversibly damage Mekong's fisheries which provides almost half the protein consumed by the poorer within the basin while the electricity produced by all the proposed eleven mainstream dams would only account for less than three years of growth in electricity demand between Vietnam and Thailand. Would you destroy your poor population's rich protein source for that measly amount of "mal-development"? That is a question which will haunt Nepal too in the future, and which can only be addressed by a fully scientific and transparent cumulative impact assessment as part of Nepal's basin development plan.

This rift in perception between what is apt- versus mal-development divides not only Nepali experts but also its international aid partners; and it was painfully palpable with USAid that provided much of support for this 3rd River Summit. Its experts too – best personified by two gentlemen with the same surname deriving from the Anglo-Saxon haberdashery profession whom I chose to call Sri Darji and Mr Tailor –stood on opposite sides of this perceptional divide. Sri Darji, an old Nepal hand with Peace Corps antecedents spoke Nepali and understood what alternative development could mean, especially for Nepal's marginalized poor. On the other hand, Mr Tailor, a corporate lawyer, who if he had come 20 years earlier, might have profitably represented the late but not lamented Enron. That marauding company was promoted by the then US Ambassador with all the might that comes from representing a super-power: she lobbied during her 4-year stint to have the development license for the 10,000 MW Karnali awarded to Enron, forgetting all other areas of cooperation that the people of Nepal and the US might have been happier to see developed. Mercifully she failed, but the short-sighted Nepali politicians she almost succeeded in brow-beating still rule the corridors of Singha Durbar and Birendra Convention Hall. 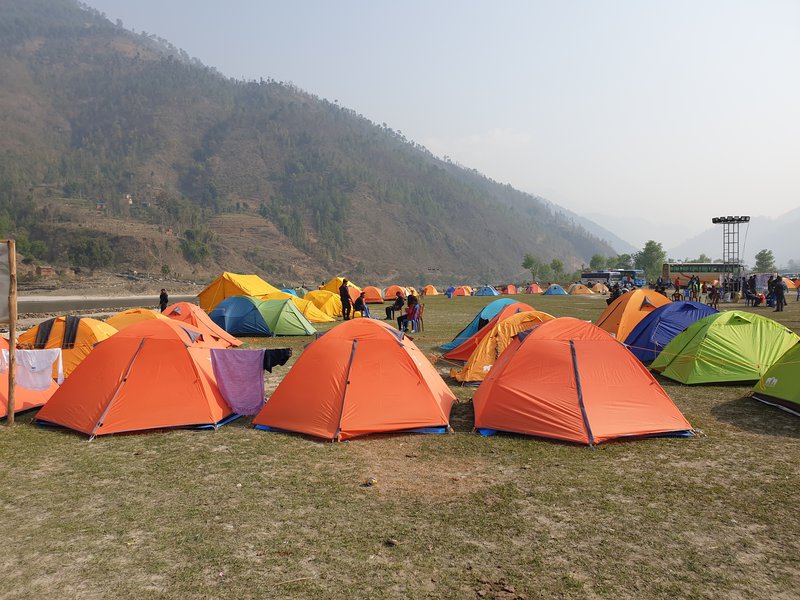 That tragic history of yore is indeed repeating itself, this time as a total farce. Western development agencies, in the Age of Brexited Trump, have now practically given up the pretense of independent development professionalism and have become raw policy arms of their respective foreign ministries. Now, with a 23% cut in State Department/USAid funding by the Trump administration, with the nomination of David R. Malpass, former Under Secretary of the US Treasury and a recorded critic of the World Bank and its socio-environmental programs as its new president, the roadmap ahead is depressingly clear. Nepali socio-environmental activists will now have to rely on their own indigenous ingenuity because nice Sri Darjis are an endangered species soon to be eaten alive by the corporate Mr Tailors of global finance. The old generation of activists can only tell Nepal's new generation that the fight against the old World Bank of the 1990s was a much easier one: its political masters at least had some socio-environmental values that they could be held accountable to. Not any more with the new ones on the horizon!

Three Decades Of Engagement In Climate Negotiations By Batu Uprety 15 hours, 17 minutes ago

Nepal's Over Dependency And Sluggish Development By Hari Prasad Shrestha 4 days, 17 hours ago