Past Development Plan Experience and A Way Forward

We cannot attribute poor level of achievement to prolonged political transformation and transition. 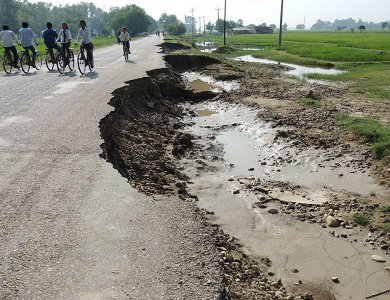 Government of Nepal have been planning for economic development for over six decades, but our plans have not met the desired targets for Nepal is still one of the poorest countries in the globe. This may sound unpalatable to our liking because truth is bitter, and it touches every Nepali wherever we live in this planet. Our neighbors, India and China have made significant economic development forward in the past four decades with pragmatic institutional and policy reforms, but in Nepal we are still struggling with how to take a leap forward in this direction. Moving forward is not possible without significant shift in the ways of doing businesses and substantive reforms making the level playing field more competitive than the two big economic giants. We must look at ourselves inwardly with honesty and compare the failings to our self-realization and redress them with sincerity.

We cannot attribute poor level of achievement to prolonged political transformation and transition. Every challenge comes with opportunity and we have missed this to bring about meaningful change. But we have remained complacent hoping that miracle would occur, and we would be fine. We could no longer afford to this status-quo by blaming the past and fail to drive reforms with pragmatic economic agenda.

Other countries have moved forward swiftly and pragmatically adapting to shifting global economic trends. Countries like Rwanda, Ethiopia, Ghana and Ivory Cost in Africa; Uruguay and Costa Rica in South-Central Americas; Vietnam,Cambodia and the Philippines in East Asia have been growing steadily better than Nepal. Opportunities abound for accelerating economic development only if we are less embroiled in political squabbling and domestic distractions. We must take lessons from past and chart realistic economic road map and pursue it pragmatically. There is no other way around for the world is about to confront with unknown disruptions emanating from the fourth industrial revolution that is unlikely to any others of the past.

We ought to recognize that the biggest challenge facing the nation is eradication of poverty and rural unemployment. Nepal has made social progress, but it has not resulted in sustainable solution to the core problems of rural unemployment and poverty. Social progress will not be sustainable without meaningful economic development contributing to positive rise in living standard of population.

Eliminating poverty and rural unemployment will require large investment in all economic fronts to propel domestic employment providing sustainable incomes to household. Without real economic development improvements in living standard of citizens only a far fetched dream. Mere increase in gross domestic production will not deliver economic development of a nation. And, without achieving a certain level of economic development contributing to higher living standards we will not be able to command due respect and dignity at global level,and as a sovereign nation. This is an undeniable truth and it is the main challenge of the next decade.

People are often reminded by ambitious political elites that Nepal can be like Switzerland of the East or like Singapore. But, no one has ever publicly presented road mapson such a lofty dream.This is misleading the population. Future development plan should be based on economic pragmatism with sincere self-realization of what is achievable on a reasonable time-line rather than repeat of subjective objectives, elucidating unrealistic expectations and rhetoric.

Just a few years ago both India and China were not economic power houses. Their economies were not much different than ours. They swiftly and pragmatically aligned their policies and strategies to global economic trends and have been making development progress. We can learn from their experiences without squandering time and energy or debating outdated political philosophies. Focus should be on economics because all nations are affected by changing phenomenon occurring at global political and economic arena. We cannot live in isolation for we are inter-connected and there can be no return to the past failures. We must forthwith abandon protectionist policy approaches and fix positively our development conundrum.

Late last March in Bangkok Nepal Policy Institute (NPI) held an interaction program with government officials. It was attended by the Vice-Chairman of the National Planning Commission (NPC) of Nepaland Nepal’s Ambassador to the Kingdom of Thailand, diaspora scholars and some senior government officials.During the session,Nepal Policy Institute echoed diaspora’s general concerns and urged government to take effective measures in addressing known shortcomings while embarking on the next long-term periodic development plan.

Most importantly, it was recognized that past development plans had faced a series of continuing impediments adversely affecting strategies, achievements and implementation challenges. Based on analysis of the past challenges the Nepal Policy Institute recommended following concrete measures which should be addressed by the government simultaneously with the preparation of the upcoming long-term development plan. These include;

(1).Remove all restrictive policies and laws affecting foreign direct investments, and promote private-public partnerships and invite direct investments in all economic areas, including small and medium size enterprises instead of excessive reliance on bi-lateral and multi-lateral aides;

(5). Create right synergies between the plan and budget allocation from the start that would positively contribute to delivery of the desired output;

(6). Reorganize state institutions and reform administrative and financial procedures which have hindered implementation delays and contributed to failures in delivering timely delivery of outputs;

(8). Enhance institutional capabilities by removing isolationist policies of the past to benefit from liberalized world market environment and ease trading relations with economic power-houses.

During the central planning era objectives and strategies used to be written at lengths but generally found in short of specifics because the state was the only primary actor for guided economic development, and no one scrutinized it. Lacking clarity on specific actionable goal and resources required in advance will remain a major shortcoming in the success of program implementation. This must change with new practical planning technique.

Problems need to be drilled dipper down to clearly identify, and specify the problem accurately, then analyze the causes to determine the remedial actions. In this way problem associated with implementation can be anticipated in advance and corrective measures considered for timely intervention and solution.Vision is a very long-term expectation on infinite time horizon, and not always a practical one. Goal is better described on short-term basis within reasonable shorter time-line. Thus, ‘objective’in the plan should be replaced by deliverable ‘output’for practical purposes.

Root cause analysis based on past delivery, achievement, capability, efficiency, and lessons learned should guide the future planning. Be prudent in setting goals with SMART technique. Describe what specific output is needed to achieve a goal on a given time scale and articulate resources required for implementation. Each output should be Specific, must be Measurable, and is Attainable,Relevant and Timely. This technique will take goal setting into an actionable level for better result. Describing specific output in the place of objective will allow better articulation of resources required and anticipation of problems in advance.

Policy review, monitoring and sanctions should be built-in with the planning process. The National Planning Commission (NPC) should, therefore, be pro-active and play catalytic role in economic development policy formulation, program design and control with over-all coordination and implementation of development activities. Restructuring of the National Planning Commission into National Economic Policy Monitoring Authority (or NEPMA) is to make it a capable and pro-active institution with enhanced mandate in planning, monitoring and implementation and as the primary enabler to development partnerships.

Long-term planning for development should not be a static event in a changing regional and global economic and political environment. Plan should serve as guiding principles in policy setting for state institutions. This requires planning process to be dynamic as well as flexible, and a rolling strategy document which puts emphasis on regular monitoring, timely implementation and making the process flexible to adapt to changing scenarios that would be required for timely completion of program.

Nepal currently faces three most pressing challenges hindering the development. The number one is the lack of world class all-weather physical infrastructure and transportation system. The number two is the continuing food deficit, as food imports from India is rising, while domestic agricultural produce is faltering. The third one is the lack of proper management of resources, specially water, forest and soil conservation and government finance. The government needs to redouble its efforts in these key economic drivers.

(1). Build Physical Infrastructure and Improve Cross-Border Transport System with neighbors. These two are the fundamentals barriers to developing Nepal’s economy into a competitive market destination. Private builders, both foreign and domestic, should be encouraged in development of infrastructure. Without manufacturing no nation can achieve economic prosperity, and this is not likely without improved physical infrastructure, efficient transportation and ease in cross-border trading.

(3). Manage Natural Resources, like water, forest, government finance, including soil conservation and solar energy. Resource management should be prioritized and re-energized with new vigor in development plan. Providing safe drinking water supply should be the top agenda.Given that development of large hydro-projects and marketing of energy have become a protracted issue for various reasons. Government should, in parallel, build small water reservoirs by tapping on rain waters for both household purposes and promote small-scale irrigation for family size small-farmings.

In conclusion, government is urged to continue with exploring new opportunities for development and investment, including in building Knowledge Economy. Pragmatic approach to economic policy strategy warrants economic alliances with emerging economies of Asia, which is the development growth engine of the 21st century.

It is unrealistic to expect that government can do everything alone at the same time in a short-span of time given that we lack adequate additional capital, technical skills and knowledge, resources and capabilities. External support should be considered because success largely depends on the availability of all three ingredients; man, money and material - all at the same time.