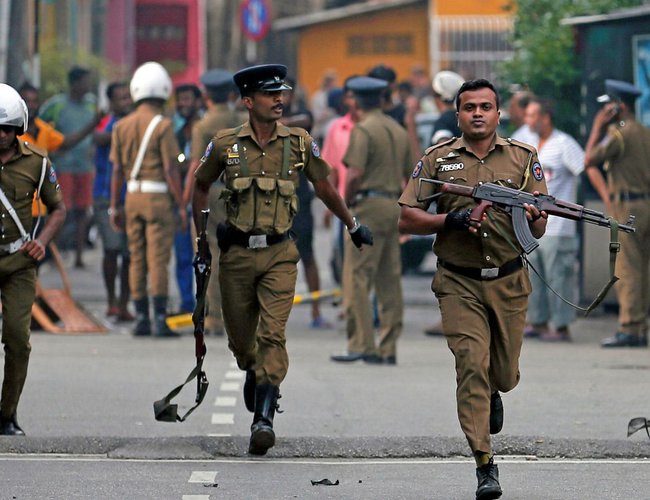 Emergency powers have come into force in Sri Lanka following a series of bomb attacks on Easter Sunday.

The powers, which came into place at midnight local time on Monday, will allow police and the military extensive powers to detain and interrogate suspects without court orders.

A government minister said militant group National Thawheed Jama'ut was behind the attacks, with Sri Lankan police investigating whether warnings of the attack were ignored or missed before the blasts at eight locations.

Police said there were warnings from international intelligence agencies as early as 4 April, with the defence ministry writing to the police chief five days later.

On 11 April, police wrote to the heads of security of the judiciary and the diplomatic security division, a government spokesman said. It's not clear what action was taken.

Some intelligence officers were aware of this incidence. Therefore there was a delay in action. What my father heard was also from an intelligence officer. Serious action need to be taken as to why this warning was ignored. I was in Badulla last night

At least 310 people have been killed and 500 injured in a series of explosions targeting churches and hotels in Sri Lanka, and two ministers have suggested intelligence officers knew something of the attacks beforehand.

A van parked near a church which was attacked on Sunday has exploded but no injuries have been reported.

Harin Fernando, Sri Lanka's minister for telecommunications, tweeted: "Some intelligence officers were aware of this incidence. Therefore there was a delay in action. What my father heard was also from an intelligence officer. Serious action need to be taken as to why this warning was ignored."

Mano Ganeshan, the minister for national integration, said his department's officers had been warned about the possibility of two suicide bombers targeting politicians.

Rajitha Senaratne, a cabinet spokesman, said: "We do not believe these attacks were carried out by a group of people who were confined to this country.

"There was an international network without which these attacks could not have succeeded." A bomb explodes in what was thought to be a controlled blast.

Mr Senaratne, the health minister, also said the government would offer compensation to the families of all the victims and to the injured depending on the scale of their injuries.

The government will also fund the repair of the churches.

Foreign Secretary Jeremy Hunt said there was "lots of speculation at the moment but there is no hard knowledge" about the perpetrators of the atrocity and "we obviously need to wait for the police in Sri Lanka to do their work".

He said the UK would offer Sri Lanka support in the days to come.

Six sites were hit with near-simultaneous explosions, with officials saying two smaller blasts followed a few hours later. The Shangri-La, Kingsbury and Cinnamon Grand hotels, all in the capital Colombo, were targeted.

Three churches in Negombo, Colombo's Kochchikade district and the eastern city of Batticaloa were also hit during Easter services.

Hours later, there were two more explosions - at a guesthouse in Dehiwala and near an overpass in Dematagoda, on the outskirts of Colombo.

Seven suicide bombers carried out the six attacks in and around Colombo, a government crime analyst told the Associated Press news agency.

Three police officers died in the blast in Dematagoda after entering a house to question suspects following a tip-off.

Police have put a curfew in place in Columbo from 8pm to 4am.

The bombings are being treated as a terrorist attack by religious extremists. Police have 24 people in custody for questioning.

No one has yet said they are behind the attacks - the worst violence in the country since Sri Lanka's bloody civil war ended a decade ago.

At St Sebastian's church in Negombo, people carried the wounded away from blood-stained pews after the explosion ripped off the roof and knocked out doors and windows.