Hostage is a tragic tale of a Nepali labourer in the Middle East told with utmost sensitivity by the author who has cleverly gone under the skin of the characters and events she unfolds in her tale. 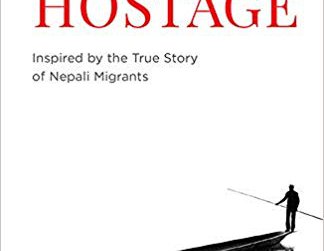 A touching, pragmatic and volatile account of lives and times of common poor people in Nepal, Hostage, although looks like a tip of the iceberg, opens the floodgate of reality of commoners in modern Nepal. Hemmed as they are/were between rock bottom poverty, corrupt, inefficient and selfish government, tyrant landlords cum money lenders on one side and the trigger happy, gun blazing ruthless Maoist Cadre on the other side, the poor have nowhere to go except overseas. Hari Prasad epitomises just the reality of a hapless villager who loves his family so dearly that he is ready to take the risk of life to make their lives worth living with dignity. Although successful to some extent in earning green currency in foreign soil but he wants more for his family but his calculations go awry resultantly he pays the ultimate price with his life.

Hostage is a tragic tale of a Nepali labourer in the Middle East told with utmost sensitivity by the author who has cleverly gone under the skin of the characters and events she unfolds in her tale. Siva’s character, also a pragmatic reality of a Maoist sleeper cell in the heart of Kathmandu is well conceived and well woven with the in-house drama that unfolds in the household of an ambitious politician, his pampered and good for nothing son and sharp and ambitious daughter in law. It reflects another reality of Maoist infiltration into the house holds of VIPs, however, the leniency and support he receives from the targeted political family to the extent of sponsoring his escape to Middle East, is something that may have escaped pragmatism, but then again, the author may have indicated in a subtle manner the nexus between the Maoists and politicians. Such nexus, across the world, are not uncommon and Kathmandu is most certainly a melting pot of power grabbing forces of Maoists and pseudo secular political parties.

The events that unfold in the Middle East and the miserable lives of Nepali workers as also their personalities and characters are depicted most realistically as the author takes the reader across their work places, living conditions in the crowded barracks as also their dreams and aspirations. Herein, Hari Prasad, grabbing the first opportunity to earn more money to provide better education for his children while dreaming of comfortable life for himself and his family is also a reality for the people of third world countries. The capture, holding hostages and the final killing by the Islamic fanatics called ISIS is definitely a bone chilling reality that had/has been a way of life in Iraq, Syria and other ISIS strongholds. At the same time the characters of Hassan and Arjun show the softer side of humanity even in the world torn apart by violence. 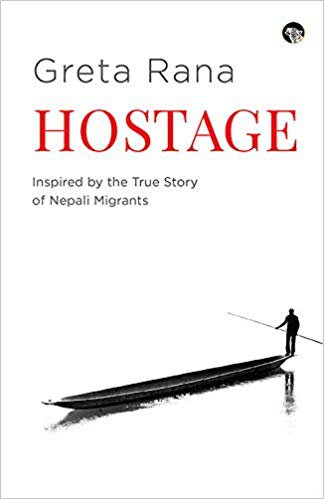 The finale of the book, the final scene between Arjun and Subhadra by the banks of Rapti and the almost real life vision of Hari Prasad in the boat is most sensitive and touching. However, as a romantic reader I would have loved to have more of the young couple building up their love life as they struggle for the compensation and their college years in Kolkata. Also, if I may suggest, little more on Jamuna’s struggle, transportation home of mortal remains of Hari Prasad by the young twins, the tragedy of cremation and the support of Arjun.

Hostage is a pragmatically beautiful unputdownable book, written with imaginative sensitivity. Kudos to the author!

Greta Rana was born in Yorkshire, England and moved to Nepal in 1971. She has written six novels and five poetry collections. In 1991, her short story, ‘The Hill’ won The Arnsberger Internationale Kurzprosa. Greta is also a founder member of PEN Nepal and a former Chair of International PEN Women Writers’ Committee.

Nepal's Over Dependency And Sluggish Development By Hari Prasad Shrestha 1 day, 1 hour ago

Nepal Is Bearing The Disproportionate Burden Of Climate Change By BHARAT RAJ PAUDYAL 4 days, 5 hours ago

Refugees In Nepal: Recognition And Inclusion By Deepesh Das Shrestha 1 week ago