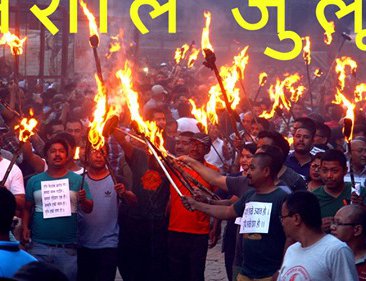 Participated by all ages of people, the torch rally concluded visiting different parts. Chairperson of NIPJSC Ganapati Lal Shrestha said that if the government did not withdraw the bill, residents of Kathmandu valley would continue their protest. Shrestha said guthi operators and locals protested against the bill in different parts of Nepal including Kirtpur, Tokha, Banepa, Dhulikhel and Pokhara.

Even after six days, the government has not shown any interest to address the demand of agitators. Nepal Communist leaders are now provoking the other beneficiaries to defend its move.

Holi Festival 2020 Under A Shadow Of Coronavirus By NEW SPOTLIGHT ONLINE 3 weeks, 5 days ago