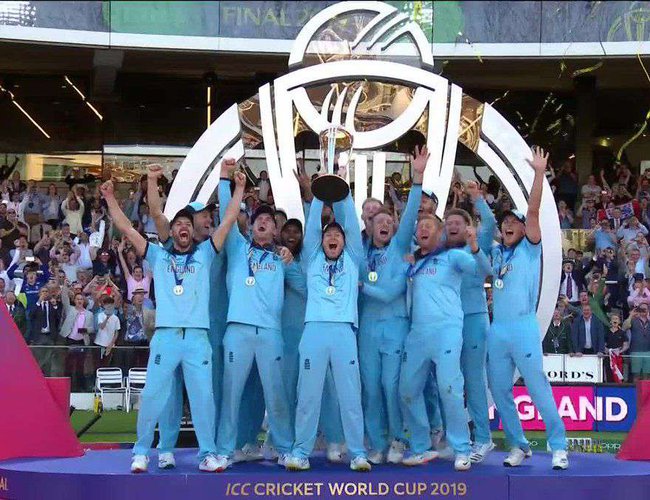 England beat New Zealand to win the men's World Cup for the first time after one of the most amazing games of cricket ever played was tied twice.

In an emotional and electric atmosphere at Lord's, both sides scored 241 in their 50 overs and were level on 15 when they batted for an extra over apiece.

It meant England were crowned world champions by virtue of having scored more boundary fours and sixes - 26 to New Zealand's 17 - in the entire match.

That it even got to that stage was astonishing in itself and came as a result of a barely believable conclusion at the home of cricket - the first tie in a World Cup final.

England required 15 from the last over of the regular match. Ben Stokes hit a six and then benefited when a throw from the deep hit his bat as he dived for ground and was inadvertently deflected for four overthrows.

He could not get the two needed from the last ball - Mark Wood was run out coming back for the second - but ended 84 not out and joined Jos Buttler for the super over.

In glorious evening sunshine, they were roared on by a febrile crowd that belted out Sweet Caroline in the change of innings.

As Jason Roy's throw came in from deep mid-wicket, a diving Guptill was short when Buttler removed the bails, sending England and the whole of Lord's into delirious celebration.

England were all but out of the game at 86-4, squeezed by New Zealand's skilful bowling, sharp fielding and smart tactics.

Gradually, they were dragged back into contention by Stokes and Buttler through patience, calmness and a little fortune.

Buttler was the more fluent, scooping and driving, but when he was caught at deep point for 59, England still needed 46 from 31 balls.

It was at this point that Stokes, the man who was hit for four sixes in the final over in England's 2016 World T20 final defeat and was cleared of affray 11 months ago, took control.

After Liam Plunkett was held at long-off in Neesham's 49th over, Trent Boult carried the ball over the boundary for a Stokes six before Archer was bowled.

That left 15 needed from Boult's final set. Two dots were followed by a heave over deep mid-wicket, then came the outrageous moment of fortune.

Diving for his ground to complete a second run, Stokes' bat was inadvertently struck by the throw and deflected the ball for four overthrows to make six in total.

With three runs needed from two balls, Adil Rashid was run out coming back for a second. When Wood suffered the same fate from the final ball, the match was tied.

The drama of the finale was at odds with almost all of the match, which was an attritional affair on a tricky surface.

New Zealand stuck doggedly to a plan that centred on batting patience. Henry Nicholls' 55, and 47 from Tom Latham, held things together in the face of some probing England bowling.

The value of the Black Caps' pragmatism in reaching 241-8 was shown when England came to bat.

England were floored, then came Stokes, the tie, the super over, and an unforgettable conclusion.