Despite efforts from both sides, the visit of External Affairs Minister of India Dr. Subrahmanyam Jaishankar to Nepal failed to make any breakthrough 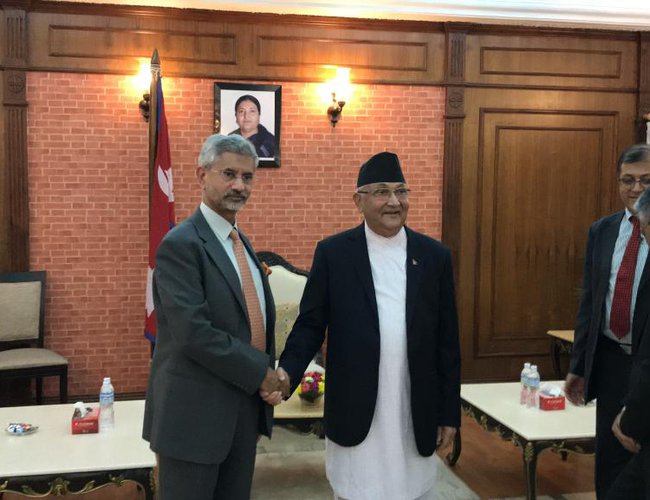 Although External Affairs Minister of India Dr. Subrahmanyam Jaishankar paid a courtesy call to prime minister K.P. Sharma Oli and held almost 45 minutes of one-to-one talk and led Indian delegation in the fifth meeting of Nepal-India Joint Commission, he was unable to make any breakthrough in Nepal like he did two days ago in Bangladesh.

Following the removal of article 370 from Indian constitution on Jammu and Kasmir, India is trying to pursue its friends and neighbors to issue a statement terming it as an internal issue. As Jammu and Kashmir state seceded as a part of Republic of India, joining the Constituent Assembly, Jammu-Kashmir issue is an internal issue of India despite differences on interpretation of the recent act in India's domestic politics.

Although Nepal declared Kashmir issue as an internal matter of India in 1955 during the tenure of prime minister K.I. Singh, the government led by PM Oli avoided issuing any statement publicly acknowledging Nepal's stand. During the meeting, PM Oli also said to have raised the issue of EPG report creating more irritation in a meeting held to make common understanding with each other.

As Bangladesh had issued a statement terming removal of 370 article on Kashmir as an internal issue of India urging all concerned stakeholders to maintain peace and stability in the region, Nepal has avoided making any statement on Kashmir issue.

Some sources claimed that prime minister Oli, who postponed his proposed medical visit to Singapore by a day, has declined to issue any statement on Kashmir. However, PM Oli raised the issue of SAARC during the meeting with external affairs minister of India Dr. Jaishankar who was expecting some firm statement from Nepal on the issue.

Although Nepal has not made any statement against Kashmir issue following the removal of article of 370, its statement also did not favor the article 370. Nepal officially maintained a low profile and even did not issue any press release on the telephone conversation between foreign minister of Pakistan and foreign minister Gyawali.

Having so many commonalities, Nepal-India relations are natural. However, the recent meetings had seen so many unnatural behavior. Instead of holding the first bilateral meeting with his counterpart Gyawali, External Affairs Minister of India Dr. Jaishankar joined one-to-one meeting with Prime Minister Oli.

Inviting external affairs minister Dr. Jaishankar for one-to-one talk with prime minister Oli and showing flexibility on other issue, Nepal made efforts to create a natural atmosphere for good bilateral relations. However, Nepal failed to woo India’s backing on India's legitimate and core issue of Kashmir.

As prime minister Oli met Dr. Jaishanker one-to-one on a natural way, he too disagreed to support India's recent constitutional, natural and legitimate step on Jammu-Kashmir.

Although Foreign minister Pradeep Gyawali has been saying that Nepal and India do not have major differences in approach, his article in Nayapatrika published on September 3 reveals the difference.

Despite being politically divided by their geographical border, Nepal and India share the same civilization, history, culture and religious foundation. India claims these factors to show special relations.

However, Minister Gyawali has held different views in writing that Nepal and India had different historical contexts. This is the kind of difference Nepal holds in relations with India.

A seasoned diplomat and former foreign relations advisor to Sushil Koirala said that the recent visit of external affairs minister Dr. Jaishankar indicates that there are many differences remaining between the two countries. "Generally, there used to be a trend to issue a joint statement and address a joint press-conference after such meetings. This time only Nepal has issued a statement and two foreign ministers did not attend the press meet. This indicates volumes in diplomacy to show where our relations stand," said Dr. Dinesh Bhattarai. "The decision to pass on the issue of EPG repot from Prime Minister level to secretary level indicates the issue again falls under the secretary level as it was two decades ago."

As is said, actions and indications are much more important than sweet words. The silence of External Affairs Ministry of India after the visit indicates something differently.

Both the governments issued a statement saying that the Fifth Meeting of the Nepal-India Joint Commission was successfully concluded. According to a press release issued by Ministry of Foreign Affairs, during the meeting, both sides reviewed the entire gamut of bilateral relations with specific focus on the areas of connectivity and economic partnership; trade and transit; power and water resources sectors; culture, and education.

“The Joint Commission expressed happiness over the momentum generated in the overall aspects of Nepal-India relations following the exchange of high-level visits in the past two years. Views were exchanged on the review of Treaty of Peace and Friendship of 1950 and submission of report of the Eminent Persons Group on Nepal-India Relations (EPG-NIR),” said a press release.

Matters related to cooperation in international, regional and sub- regional fora were also discussed. The Joint Commission expressed happiness at the progress made in the bilateral projects, such as Motihari- Amlekhgunj Petroleum Products Pipeline, four segments of Hulaki Roads, and post-earthquake reconstruction of private housing in Nuwakot and Gorkha districts which have been completed. They expressed happiness over progress made in Jayanagar-Janakpur and Jogbani-Biratnagar sections of cross-border railway projects and Integrated Check Post in Biratnagar. The Joint Commission agreed to expedite the early completion of remaining agreed projects. 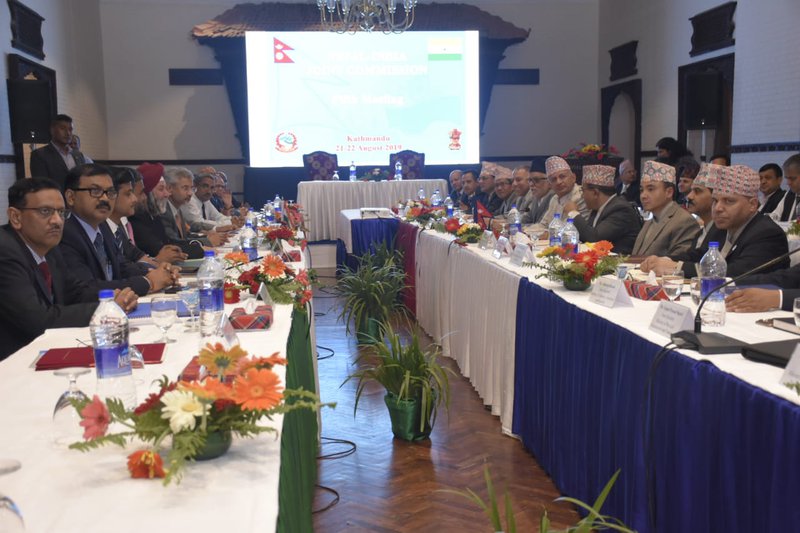 Both sides agreed to an early conclusion of the review of treaties and agreements related to the trade, transit and rail services. They also agreed to continue upgradation and maintenance of infrastructure and logistic facilities at major border crossing-points for facilitating trade and transit between the two countries.

“Noting that inundation is a serious problem for people living in border areas, the Joint Commission underlined the need for addressing inundation issues due to, among other things, the inadequate drainage provision that obstructs the natural flow of water in border areas. The Joint Commission agreed to take action on the recommendations made by a joint team comprising officials from both side who had visited twice the inundation prone areas along Nepal-India border and continue monitoring of the inundation prone areas,” said a press release.

The two Ministers emphasized the importance of tourism in socio-economic development and agreed to enhance their cooperation in tourism sector, particularly in the context of Visit Nepal Year 2020. On Nepal’s request for additional air entry routes to Nepal, it was stated that discussion which are underway between the civil aviation authorities of the two countries would yield positive results. 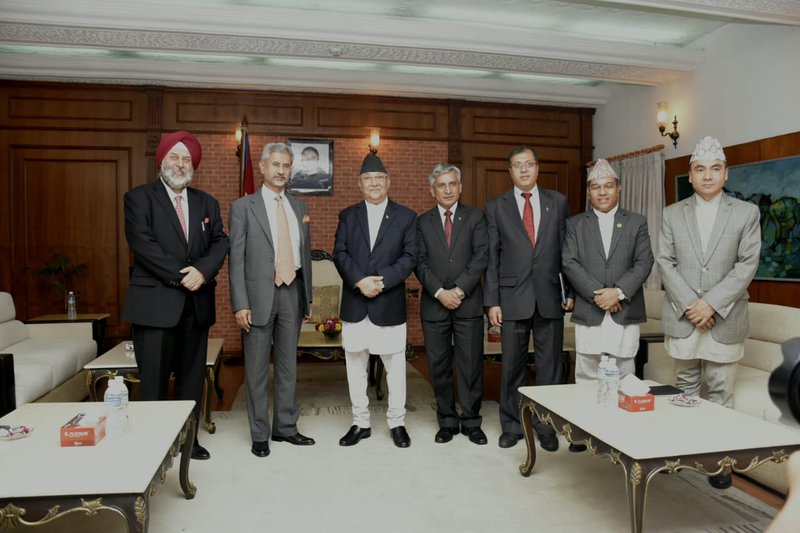 The 35-member Nepali delegation headed by Minister for Foreign Affairs Pradeep Kumar Gyawali and his Indian counterpart Subrahmanyam Jaishankar leading his respective delegations co-chaired the meeting at the Hotel Yak and Yeti this evening.

The two ministers also witnessed the signing of Memorandum of Understanding (MoU) between Food Safety and Standards Authority of India (FSSAI) and Department of Food Technology and Quality Control (DFTQC) of Nepal on food safety and standards.

The Joint Commission meeting reviewed the overall state of bilateral relations, and various areas of cooperation such as connectivity and economic partnership, trade and transit, power and water resources sectors, culture, education and other matters of mutual interest, according to a statement issued by Ministry of Foreign Affairs. 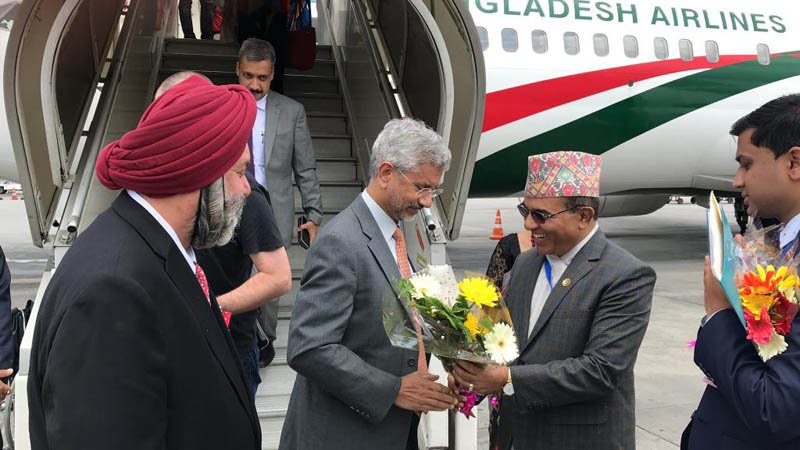 As is said, it does not have any value in diplomacy how many good and warm words are shared between the two nations and agreements or MoUs signed until both the nations share each other's legitimate concerns.

Biden Administration Wants To Partner With Nepal To Meet The Common Challenges By NEW SPOTLIGHT ONLINE 2 days, 16 hours ago

India Provides One Million Doses Of India Made COVID-19 Vaccine to Nepal By NEW SPOTLIGHT ONLINE 2 days, 16 hours ago

Nepal Is Committed To Protect Human Rights Of The People: Foreign Minister Gyawali By NEW SPOTLIGHT ONLINE 3 days, 12 hours ago