Today Is Fulpati And 7th day of Navaratri

Today Is Fulpati And 7th day of Navaratri 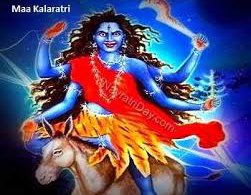 Hindus across Nepal are observing Fulpati, the seventh day of 10-day long Dashain festival. According to practices, Fulpati, an assortment of flowers, leaves and fruits of different plants considered auspicious, is anointed at Dashaighar in Hanumandhokaon, Kathmandu. People offer Fulpati to Goddess Durga as per tradition throughout the country.

As per the tradition, the Fulpati is brought to Kathmandu to be anointed at the Dashaighar at the Hanumandhoka Durbar.

The Gurujyuko Platoon, the Nepal Army, Nepal police, and high-ranking officials of Armed Police and civil service, the Asha Gurja team, and panche baja (traditional musical band) and decorated Kalsyoulis, and a procession along with cultural pageantry leave Hanuman Dhoka for Jamal with the Fulpati.

The 7th day of Navaratri is dedicated to Maa Kalratri, the 7th Avtar of Maa Durga. Here, Kaal means time and death and Kaalratri means the One who is the Death of Kaal. Maa Kalratri destroys ignorance and brings light into the dark. Well, this form also depicts the dark side – the super power that creates havoc and removes all things bad and dirty. But to Her devotees, She brings calmness and courage.

Maa Kaalratri has dark complexion. Donkey is Her mount, She has bountiful hair and four hands. One of the two left hands holds a cleaver and the other holds a torch, and the right two hands are in “giving” and “protecting” mudras. She has three eyes emanate rays like lightning and Her necklace is shining like thunder. When She inhales and exhales air, flames appear through Her nostrils. Ganesha advises you to wear Blue, Read and White colour on this day.

Maa teaches us that sorrow, pain, decay, destruction and death are unavoidable and cannot be ignored. These are the truths of life and denying them is futile. We must accept their presence and significance to realise the fullness of our being and our potential.

Navratri is a special occasion. A time for new beginnings and offering your dedication and reverence to the Goddess Shakti. This Navratri, bring home and institute a Meru Prusth Shree Yantra - a beautiful, divine symbol of the blessings of Goddess Lakshmi herself.

Swasthanibrathakatha To Conclude Today By Agencies 6 days, 23 hours ago

Valentine's Day 2021: The significance Of This Day By Agencies 2 weeks, 5 days ago