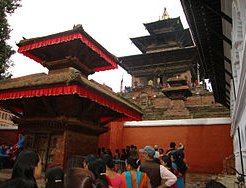 Large number devotees are now queuing to visit Taleju Temple in Bashantapur. The temple opens once in a year on the occasion of Mahanavami.

Maha Nawami falls on the ninth day of the waxing moon in the month of Asoj as per the lunar calendar.

Devotees attend special worship of Durga Bhawani today and the ‘jamara’ which have been germinated is offered to the goddesses at various shrines. Billy goats, ducks, roosters and male buffalos are sacrificed at various temples dedicated to the goddesses. Those who do not have the tradition of offering animal or bird sacrifices, offer the sacrifice of fruits and vegetables to the goddess.

On this day, the security forces also perform what is called the “kot puja’ or worship of the armouries. The Taleju Temple located at Hanumandhoka in the capital city is also opened for the devotees to pay homage on this day. The temple is opened only on the occasion of Maha Nawami.

The third and final day of Durga Puja marks the auspicious occasion of Mahanavami or the ninth day of Navratri. Goddess Durga, worshipped as Mahisasuramardini, or the ‘annihilator of the Buffalo demon’, is revered where after a holy bath, and Shodhasopachar puja, she is honoured with sixteen types of offerings. This year, Mahanavmi falls on October 7.

It is considered that puja performed on Mahanavami is equal to worshipping the goddess on all nine days of Navratri. On the day, the Siddhidatri form of Durga is worshipped. Girls who have not attained puberty are also worshipped as goddess Durga. Their feet are washed and they are served with puri, chana, kheer, halwa and gifts. Some devotees also observe the Mahanavami Upvas on this day. 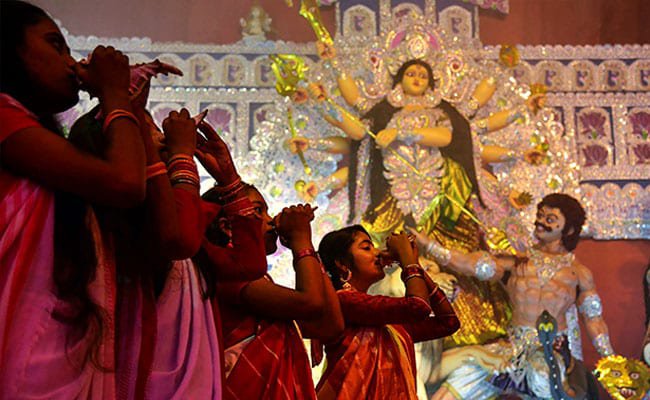 Maha Navami (Mahanavami) or Durga Navami is celebrated as the victory of good over evil. It is the last day of battle between goddess Durga and demon Mahishasura. Maha Navami begins with Mahasnan (holy bath), followed by prayers to goddess Durga or Maa Durga. It is believed that on Maha Navami goddess Durga is worshipped as Mahisasuramardini - which literally means the slayer of the buffalo demon. On Maha Navami, Durga Maa made her final assault on demon Mahishasura, and the following morning, on Vijayadashami, triumphed over him. In fact, Vijayadashami gets derives its name from the Sanskrit and Hindi words Vijaya meaning victorious or triumphant, and Dashami, meaning tenth day. Vijayadashami is also celebrated as Dussehra, which too derives its name from the Sanskrit words Dush meaning bad or evil, and Hara which means defeating or destroying - thereby signifying the victory of good over evil.

What Is Ram Navami? How Is It Different From Maha Navami (Durga Navami)?

Ram Navami is the festival that celebrates the birth of Lord Ram. It is celebrated on the ninth day of Shukla Paksha (or bright phase of the lunar fortnight) in the month of Chaitra (mid-march) of the Hindu or lunisolar calendar. This typically occurs in the Gregorian solar calendar months of March or April every year.

According to India's ancient Hindu scriptures, the Lord (Vishnu - the preserver), through time, descends from his heavenly abode in his various incarnations or avatars, to show all the beings of the world the path of truth and righteousness; and to ensure that good triumphs over evil. Vishnu is one of the principal deities of Hinduism, and is considered the supreme being in its Vaishnavism tradition. Vishnu is the 'preserver' of the universe in the Hindu trinity that includes Brahma (the 'creator' of the universe) and Shiva (the 'protector', or 'destroyer' of all evil). Lord Ram (Lord Rama) was an incarnation or avatar of Vishnu.

In Nepal and north eastern India, Durga Puja is synonymous with Navaratri. In both festivals, goddess Durga battles and emerges victorious over the demon Mahishasura. In the northern and western states, the festival is synonymous with "Rama Lila" and Dussehra which celebrates the battle and victory of Lord Ram over the demon king Ravana. In the southern states, Dasara is celebrated as the victory of different goddesses (Goddess Chamundeshwari), and Lord Ram is celebrated. In all cases, the common theme is the battle and victory of good over evil.

Swasthanibrathakatha To Conclude Today By Agencies 7 hours, 10 minutes ago