There is much room to further elevate the China-Nepal relations, but India is wary of this as New Delhi regards South Asia as its own sphere of influence. 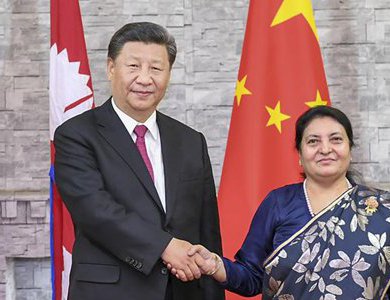 Chinese President Xi Jinping's informal meeting with Indian Prime Minister Narendra Modi has made waves with bilateral ties getting a fillip amid a new warmth pervading the relationship. Xi's ensuing visit to India's northern neighbor Nepal is the first by a Chinese president in 23 years and has lifted the bilateral relations to a new level.

Since the two countries established diplomatic ties in 1955, China and Nepal have maintained good relations. The two countries ratified the border agreement in October 1961 and amicably resolved the border issue. They respect each other's core interests as well as sovereignty and territorial integrity. Nepal supports China on the Tibet question, and "pro-Tibet independence" activities are banned in the country. China appreciates this. 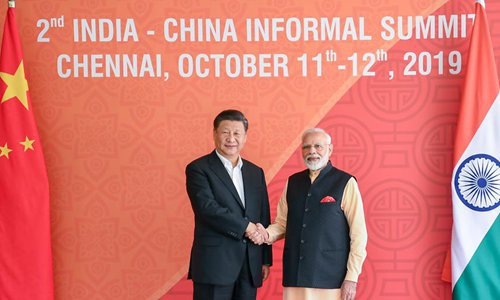 China and Nepal have huge potential in cooperation. Nepal has a population of roughly 30 million and is rich in natural resources, but development has been seriously hindered by geographical barriers and political instability. In the 21st century, South Asia has become another fast-growing region after East Asia, and Nepal shows strong desire to develop. Being close to China, the second-largest economy in the world, is a huge advantage for Nepal's development. The China-proposed Belt and Road Initiative will create historical opportunities for the country.

China-Nepal cooperation benefits infrastructure. The two sides should work together to upgrade the three major ports of entry between them. Meanwhile, China and Nepal should advance the China-Nepal railway project to link the city of Xigaze in Southwest China's Tibet Autonomous Region with Nepali capital Kathmandu.

The two countries can cooperate in natural resource exploitation. Nepal has abundant water resources, but it lacks fund and technology. This has led to shortage of power supply in Nepal. China can assist Nepal in hydropower generation, which will not only help Nepal meet domestic electricity demand, but also help it export power.

China and Nepal can deepen industrial cooperation. Nepal is basically in the pre-industrial stage. It imports most consumer goods. If China and Nepal cooperate to build industrial parks in Nepal and attract Chinese enterprises to invest, it will not only meet Nepal's domestic needs for commodities, but also create employment opportunities.

Stability in Nepalese politics can help tap the potential for bilateral cooperation. Nepalese politics had been unstable in the past few years. This not only hindered Nepal's development, but also hurt China-Nepal cooperation. In 2018, the Communist Party of Nepal (Maoist Center) and Communist Party of Nepal (Unified Marxist-Leninist) formed a coalition government and Khadga Prasad Sharma Oli was reelected prime minister, ending the decade-long political turmoil. The merger of the two parties has stabilized Nepal's political condition.

There is much room to further elevate the China-Nepal relations, but India is wary of this as New Delhi regards South Asia as its own sphere of influence. India fears that Nepal's deeper ties with China will weaken such influence. For one thing, China should further explain its intentions of developing relations with Nepal and other South Asian countries. For another, China can invite India to join China-Nepal cooperation projects and develop China-Nepal-India trilateral cooperation. This will not only enhance trust, but also increase the economic value of the cooperation projects.

For example, if the three countries can cooperate in hydropower generation, Nepal's resources, China's funds and technology and India's huge market can be leveraged together. As China-India strategic trust has increased, Nepal, in the middle of the two most dynamic economic powers, can use Chinese and Indian resources to promote its own development and act as a bridge linking the two nations.

The author is director of the Center for Indian Studies at China West Normal University and research fellow at the Charhar Institute. opinion@globaltimes.com.cn