The Come Back Of China In South Asia

Strategic connectivity, infrastructure development, supplies and energy security reveals the strategic importance of Nepal-Sino relationship and is an excellent form of development for stability and prosperity 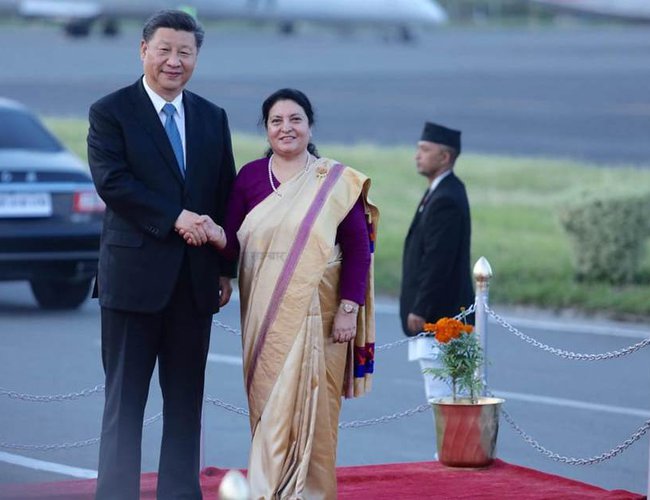 China is constructing a land bridge to the Indian Ocean, while the US competence to persuade the power balance in South Asia is declining.

China’s President Xi Jingping’s two days State visit to Nepal on the 12th and 13th of Oct after meeting Pakistani PM Imran Khan in Beijing on 9th Oct, followed by the second Wuhan informal meeting at Mamallapuram, Tamil Nadu with PM Modi of India on 11th and 12th Oct, has sophisticated Nepal-Sino relationship. The visit after 23 years comes together with opportunities and geopolitical challenges. Political decision and agreements are created for furthering and executing the arrangements which present confidence. National, trilateral, regional and international security impacts are occupied of viability and possibilities. Implications on national security should achieve equal or even more footing that thrive through political decisions. Political track alter with interests but security dilemma and sovereign catastrophic do not. Strategic connectivity, infrastructure development, supplies and energy security reveals the strategic importance of Nepal-Sino relationship and is an excellent form of development for stability and prosperity. Geopolitical trends do not only have economic benefits it is inflows of geostrategic security complexities and challenges. Flow of goods and tourists via well developed networks and partners for strategic development should boost Nepal’s capacity but has defense and security dimensions. International, regional bearing is being visible when Himalayas are flattening and the nationalist undercurrent is enduring. There are three key areas International fervor, Regional implications of relationship and what and how it matters to Nepal.

Seven of the 10 largest standing armies of which six are nuclear powers and accounts to 60% of the global GDP is the Indo-Pacific region. The region is the priority theatre of the US strategy and restates that the US is a Pacific power, a resident Asian power and is there to stay with the reaffirmation of the Indo-pacific as Free and Open Indo-pacific (FOIP). The US National Defense Strategy 2018 sharpen up the initiative of China as a ‘strategic competitor’, a revisionist power and authoritarian actor along with Russia and gestures the US’s pledge to compete, deter and win in the multifaceted surroundings. This also is in line with the Asia Reassurance Initiative Act (ARIA 2018) equipped to endorse US interests in the Indo-Pacific.In the late 19th century the strength of the Silk Road- the trade route between Asia and Europe was a foundation of Kublai Khan sprawling empire, which can now be contended as the Belt and Road Initiative (BRI). BRI the Chinese new vision announced in 2013 by President Xi aims to strengthen China’s connectivity with the world that equates to the old Silk Road. It will encompass around 60 nations primarily in Asia and Europe and estimated US$ 4-8 trillion. Nepal is a signatory of the BRI and waiting for projects to be implemented.

Of the fifty nations Nepal is also a recipient of US$ 500 million from the Millennium Challenge Cooperation(MCC)for enhancing connectivity by increasing availability of electricity, lower transport cost. It is principally helping to spur investment, accelerate economic growth and reduce poverty, which is awaiting approval of the parliament and India’s green light.

An indirect reference to China, the US strategy looks at the future with pre-emptive and preventive actions and dealings in the region. The American century started in the middle of the 20thcentury that has political, economic and cultural influence and is the only superpower after 1991 collapse of the Soviet Union. Avoiding the Thucydides trap by both China and the US requires immense attempts. War may not however be foreseeable four of the 16 cases in the last 500 years did not end in violence, which is a relatable teaching for our world leaders.

For Nepal, the question may lead to or arise in the future: Who is a greater friend?

The informal candid conversation is to develop deeper understanding for India and China but has regional implications. Nations of South Asia are assessing vigilantly and contemplating on the likely discourse from the second Wuhan summit held in Mamallapuram. The second summit took place against several backdrops. PM Modi’s visit to the US and his backing Trump with “Abki Baar, Trump Sarkar” raised question of support by India to Trump during the first of its kind joint appearance mass gathering in Huston Texas and first of its kind intercontinental election campaign “Howdy Modi”. Jaishankar refuted the notion that Modi used the slogan to endorse Donald Trump’s candidature for his 2020 reelection campaign.

Second, India’s growing relationship with the Australia, Japan and the US (QUAD) and the Malabar 2019 trilateral maritime exercise in the Pacific Ocean a few weeks before the visit.Three, the 5th Aug presidential order to make changes to Article 370 of the Indian constitution, a provision that gave Jammu and Kashmir special status; Pakistan displeasure has been opting for diplomatic efforts and PM Imran Khan was in Beijing a few days before the informal summit. China support to Pakistan at the UNbut recently omitting its references of the US Security Council resolution and watching the situation in Kashmir and support Pakistan in issues related to its core issues has several proposition one, to re-secure self-reliance from the people and of Pakistan, two, providing a clear message to other nations of South Asia that China will stand firm when it comes to India’s dependencies, dominance and interests, three, create an environment for political influence through economic and security assistances. FM Gyawali of Nepal in Male in Sept came out together with other South Asian nations Bangladesh, Maldives and Sri Lanka that India’s actions are internal matter dissimilar to the first motion that Nepal was in favor of peace and stability in the region and a belief of any problems that surface being resolved through negotiations has stood for regional peace and stability and problems should be solved through dialogue.

Four, When China-Russia ties nurture robust by the day; Modi was the chief guest at the Eastern Economic Forum held in Vladivostok, Russia this Sept. “Act Far East” policy was launched and asserted that India will walk shoulder-to-shoulder in its development of the Far East with a $ One billion line of credit for the development of the resource rich region. India’s presence and involvement in a sparsely populated Far East of Russia as part of its Indo-Pacific strategy (IPS) will balance Chinese presence in this region. Little is initiated to reinforce disagreement in US-China relations.

Xi’s visit to Bangladesh came after three decades in Oct 2016, during the visit the two countries upgraded their ties to a strategic partnership of cooperation, endorsed 27 MoU totaling US$ 13.6 billion and marking the year 2017 as “Year of Exchange and friendship”.

FM Jaishankar on Oct reiterated that it would not rethink or join BRI. “We have a longstanding position on that. It is connected with sovereign matters. That has not changed”. In contrary India is putting efforts to strengthen Bay of Bengal Initiative for Multi-Sectoral Technical and Economic Co-operation (BIMSTEC)together with a joint military exercise focused on countering with unity common threats. Nepal stayed out of the Joint Military exercise with a political decision at the last moment. The China-Pakistan-Economic Corridor, Bangladesh-China-India-Myanmar economic corridor are closely related to the BRI, Highway that borders the Himalayan nations Nepal, Bhutan and India are formidable efforts aims to find market in India and maritime shipment to Africa and West Asia. China is constructing a land bridge to the Indian Ocean, while the US competence to persuade the power balance in South Asia is declining.

Xi’s visit to Nepal after more than two decades completed with the signing of 18 Memorandum of Understanding(MoU) and 2 letters of intent and elevated bilateral ties from comprehensive partnership of cooperation to a strategic partnership of cooperation. US$ 500 million in the next two years for capacity development and uplifting basic living standards together with an emphasis on efforts to present Nepal as land linked from land locked. The extradition treaty was not signed even if the third bullet of the agreement cites legal assistance in criminal matters.

While the Nation was gearing up for the Chinese President’s visit with vigor and enthusiasm diplomatic proceedings were witnessed.The US embassy in Kathmandu asked for clarification from the Ministry of Foreign Affairs after FM Wang’s Yi visit to Nepal and the Chinese Foreign Ministry statement“Nepal firmly adheres to the non-alignment policy, disapproves of the so called ‘Indo-Pacific Strategy’ opposes any attempt to stop the development of China, and always believes that China’s development is an opportunity for Nepal and is willing to learn from China’s successful experience”

For the first time a meeting by the ruling Nepal Communist party (NCP) was held to find a collective posture on the IPS and how the party should focus in the future.

The relationship between the two communist parties would further strengthen as a fraternal relationship was established between the Communist Party of China (CCP) and NCP with the signing of six MoU in the presence of PM Oli and NSP Co-Chairman Puspa Kamal Dahal. Commitment to “One China Policy” and Xi Jingping’s thought on socialism with Chinese characteristic for a New Era were conversed but some argue it was to indoctrinate Xi’s thoughts and ideology.

To witness more Xi Jingping’s visit in Nepal, the relationship should vision as a long term development discourse not driven by events or policies by a particular political party in power.The visit should not be operational to assure electoral victory as it can be turned into a strategic miscalculation for national security and democratic values that the Nepalese cherish and so dearly garner.

Strategic framework and bilateral mechanism exist. Nepal has to look in parallel and get the government’s tools and instrument in position to meet the geopolitical alterations. Contribute in building a safer region as well as along China and India’s borders to prevent terrorism, crimes and militancy as efforts will come at a price. New modalities and common national security and foreign policies have to be the people’s properties or pay the price of an imperfect immediate neighbor.

“Chop Stick Theory” may be adopted for happiness, the first stick, Nepal must retain what China values in Nepal and the second, Nepalnot realign its foreign policy must be guided by the non alignment policy or the bucket theory may come into reality.

China’s strides in South Asia will modify geopolitical pragmatism geostrategic reality and eventually aim at being a bridge to the Indian Ocean.